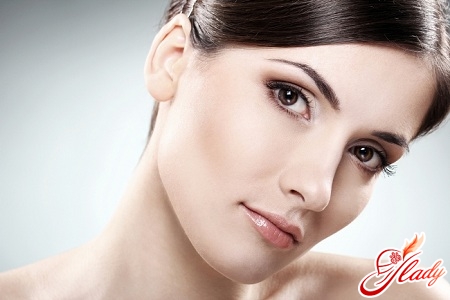 Without the eyebrows one can not imagine his face - it,probably, will turn into a mask. The same physiognomists can, by one trait, determine the character of a person. In this science, great importance is given to the eyebrows. So, for example, in women with a triangular shape of the eyebrows - imperious and hard. They clearly know what they want, and are confidently achieving their goal. Girls with semicircular eyebrows - soft and flexible, and "arches" above the eyes, which in shape more resemble a straight line, is a testament to a bright personality that does not have constancy. Experts argue that the reverse is also true: changing appearance, including making eyebrow correction, can affect the character, create a new image. For example, if you want to turn into a female vamp, then the inner edge of the eyebrows should be made low and close planted, and to create a feeling of something completely new, it is enough to impose your own eyebrows and draw others. Clearly outlined "arcs" of the right form are able to change any person. Sometimes, it would seem, everything is perfect. Makeup, hair ... but something's wrong. Take a closer look at yourself, perhaps you should make an eyebrow correction? This can be done in various ways: pluck with tweezers, paint with a special pencil, decide on tattooing and so on. Another method that is becoming more popular is eyebrow correction. It has always been used by Oriental women to always remain beautiful and attractive. With the help of a single cotton thread, they created the ideal shape of the eyebrows. Today, by the way, this way of removing superfluous hair on all sites not only of a person, but of a body, is practiced in South Asia and the Middle East. It is very simple and effective - the eyebrows immediately become expressive, since along with the large superfluous hairs the "fluff" which is plucked with tweezers is quite problematic.

Before proceeding with the correction, study the formhis eyebrows. To do this, make several samples, coloring them in different colors using contour pencils (choose the shades to your taste - from maroon to gray and black). In this case, you can experiment: lengthen or shorten, widen or narrow the basic shape of the eyebrows. Since they take an active part in facial expressions, then changing them, you can transform and facial expression, make it more expressive and give a pretty look. Eyebrow correction today is consistent with the doctrine of ideal proportions - the rule of the golden section. Identify the ideal shape for your face with an ordinary pencil. This is done in three stages.

If you decide to perform a correction procedureindependently, consider your age and individual facial features. For example, the arcuate "thread" eyebrows will make you older by adding age, and even - visually narrow your eyes. On the broad face, the eyebrows should not be narrow and extend beyond the eye line more than two millimeters. They should have a clear ending, but look natural. Making the eyebrows a little shorter and lifting their ends, you can slightly lengthen the wide face, and make the narrower visually wider. You can change the rectangular shape, visually making it oval, if you slightly reduce the bend of the eyebrows. As you can see, with the help of correction alone, you can dramatically change your entire image. After you decide on the form, you can proceed with the correction. 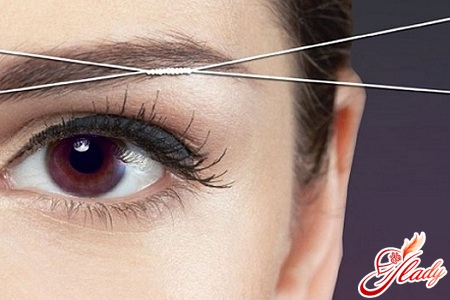 Technique of the procedure

To learn how to adjust eyebrows withthreads, you need skill, knowledge of theory and, of course, experience. The easiest way to get the information you need and make a good correction is to visit a cosmetology salon where the specialist will not only pick the right form that suits you, but also conduct the procedure painlessly and effectively. But if you are not looking for easy ways, then have patience, and it will all work out! This technique of eyebrow correction is that the special thread is strongly stretched, thrown by a loop on the hairs, which are then sharply pulled out. Traditionally in the East, women keep it from one side with their teeth, but this is very inconvenient, especially if you conduct the procedure yourself. In this case, it is better to use both hands - tie the thread from the ends, and in the middle twist into a kind of loop. Thus, you can remove excess hair not only on the eyebrows, but also over the upper lip, in the area of ​​the nipples, on the chin and on other parts of the body. Choose a thread made of cotton. Synthetics are electrified and do not create the necessary tension, and silk is too smooth and will slip constantly. Cosmetological salons use a special fiber, which is an interlacing of extremely thin nylon threads. With rapid contact with the skin, they easily grasp the hairs and pull them out at a sharp tension. Therefore, this method is considered to be the most effective for correction of eyebrows, especially since it allows you to cope with those areas that are not subject to tweezers.

Pros and cons of correction with a thread

Before proceeding with the deletion itselfunnecessary hairs, think about whether you are ready to undergo such a procedure. For this, let us consider its shortcomings and advantages. The most important plus is the ideal shape of the eyebrows afterwards. As we already mentioned above, this method allows you to remove even the fluff, which tweezers can not always cope with. In addition, despite the fact that the process itself is rather painful (especially if this is the first time), it passes quickly enough. You do not have to endure a long plucking. However, the sensations are always individual - it depends on the pain threshold of a person. If the procedure is carried out correctly, the skin is not severely injured, while not only the extra hairs, but also the dead cells of the epidermis are removed. Among the main disadvantages can be identified that it is difficult to carry out such correction independently at home. However, if you tried and did not succeed, contact the salon. Today this method is popular, and the prices for it are rather mundane. Another disadvantage is strong pain. By correcting with tweezers, you can anesthetize the eyebrow area by applying ice, but when using the thread it does not work, because wet hairs do not stick to it. But if you want to look attractive, you need to sacrifice something. After correction, the updated shape of the eyebrows lasts about one month. Then the hairs grow back, without changing their structure. Sometimes after the procedure, there may be a slight reddening (in fact, as well as after plucking). That it does not spread and the past is faster, you need to treat this place with an antiseptic.

To master a new way of adjusting,take a thin cotton thread, face cream, a bowl of water at room temperature, ice and cotton. Initially, you should prepare the skin for the procedure: moisten the epilation area, and after the product is well absorbed, moisten the cotton pads with warm water and attach them to the eyebrows, remove the remnants of the cream. Unwind the required amount of thread, tie it at the ends, and in the middle twist into a loop. The latter move, gradually throwing on extra hair and pulling. After the end of the procedure, attach the ice to the eyebrows, and afterwards apply cream to the skin. There is another option for this correction. The difference is in the preparation itself. It does not start with moistening, but with steaming. You can make a correction after the shower or specifically hold your face above the hot water tank for about ten to fifteen minutes. After this preparation, cleanse the skin with a tonic or other alcohol-containing solution, say, calendula tinctures. Remove excess hairs by moving the thread in the direction of their growth. This will avoid damage and reduce pain. To reduce sensitivity, never make a correction during menstruation, because during this period the female organism is most susceptible, the probability of inflammation and infection increases. If there is irritation in the eyebrow area on the skin, it is better not to perform the procedure, but to make it much easier, at the preparation stage carefully steam out your face - the pores will open and you can easily remove excess hairs. Cosmetologists recommend doing correction at least once a month, in case it is necessary. If you went to the salon, then remember that the hair will still grow chaotic, so you will have to choose a new shape. You need to do this based on the type of person - only in this case you are successful! We advise you to read:

Beautiful makeup: how to make it right?

How to make the look more expressive