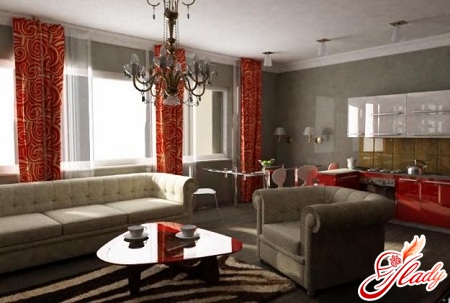 Housing issue, tormented more heroesBulgakov's novels, and to this day remains vital and burning. What can you do? Not everyone was lucky enough to have spacious apartments. And a large (and far not the worst) part of the population of the entire territory of the former USSR continues to be satisfied with its heritage - close Khrushchevs and modest apartments in paneled apartment buildings. So the design of small apartments, or rather his ideas occupy the minds of this very part of the population day and night. After all, I want to live if not in a big apartment, at least in a very comfortable, beautiful and fashionable. Meanwhile, designers and artists, catching the mood of potential customers, seriously engaged in the development of rules for the design of small apartments. And, we must give them their due, they succeeded in this very much. Moreover, they are not stingy at all, they share the ideas of design "small-sized" interior and on the pages of special publications, and in television programs, and (naturally!) On the Internet. And if fate decreed that you have to live in a small one-room or two-bedroom apartment, then these ideas and rules will be useful for you.

Ideas for solving the "housing problem"

All design projects of small childrenApartments are subject to two purposes: visual expansion of living space and its functional improvement. The most common and popular right is the idea of ​​creating an apartment-studio. When creating studios, designers work exclusively with the horizontal space of the apartment, integrating all its premises into a single whole (with the exception of places of solitude). And such a focus (the conversion of conventional apartments in the studio) they are able to do with both one-room and two-bedroom apartments. The second successful, but less common idea can be considered the interior design of a small apartment using its free vertical space. In this case, the apartments are equipped with so-called "second floors". True, this focus is possible only in apartments with high ceilings. However, in practice, both these options are difficult to implement. When creating a studio, it is necessary to dismantle the walls even in one-room apartments. And this is called re-planning and requires coordination in the appropriate authorities. In the second case, of course, you will not need any permits for the device of catwalks and second tiers. But imagine how much money will be spent on the embodiment of such a design idea, even in one of the rooms of a two-room apartment. However, if you are determined, you can start a grand repair with the collapse of the walls or building a two-tier room. As a result, your apartment will turn into a very fashionable and stylish dwelling, albeit a small one. But there are less radical ways, thanks to which the design of a small apartment will be no less fashionable and no less stylish. 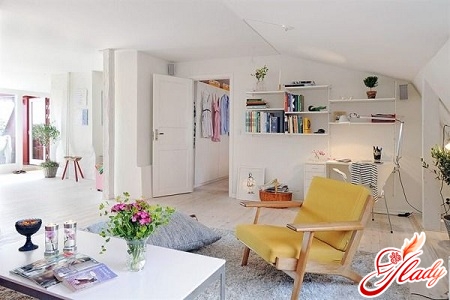 Ways to solve the "housing issue"

Turning one-room or more overall,but also a very small apartment in an immense apartment is impossible. But it is possible to create the illusion of a more vast space than it really is. One way of such a successful "deception" will be zoning, when the room visually divides into certain zones: a living room, a dining room, a sleeping and a workplace. This is possible due to the successful overplaying of the texture and color of the floor and wall coverings. In addition, designers offer to use for zoning all kinds of light screens, curtains, shelving. And they are actively using for the zoning effect the different levels of the floor and ceiling - the method is very effective. Opposite reception is the combination of functional zones, when the living area at night becomes a bedroom, and the dining room, if necessary, turns into a study. That is, the same furnishings perform different functions at the request of the host. However, this method has long been used by most owners of very small apartments. Although, perhaps you will have your own ideas for solving this problem. Another way to expand the space of a small dwelling is the rational use of "dead zones": through passageways, places near the doors, space near the windows. But for these seemingly hopeless cases, designers find quite acceptable solutions. They turn windowsills into work tables, replace arches with arches, and place stools around the table instead of chairs. In addition, a very successful design project of a tiny apartment implies interesting ideas for using its "hidden reserves": niches, bay windows, mezzanines, and multifunctional and folding furniture. So, for example, a niche can turn into a wardrobe, a box for laundry in the couch can replace a chest of drawers or a part of a closet, and a bay window to become a bedroom - ideas can be the most unusual.

Rules for resolving the "housing issue"

For a small apartment interior design should be developed according to certain rules. In any case, it is these rules that are followed by professional designers.

In the event that you have to solve the problem with a one-room apartment, you may find useful the following tips, which can greatly facilitate the task. So:

If there are two generations in a one-room apartment- parents and children - it is very important for everyone to allocate their personal space. And then two-way wardrobes can come to the rescue - coupes, which are used for visual zoning of the apartment.

Owners of a one-room apartment should not be missedout of sight and all sorts of shelving. They not only visually distinguish the living room and sleeping area, but also help to solve the issue with a huge number of things. After all, as a rule, their placement is always the real headache of housewives living in a one-room apartment. 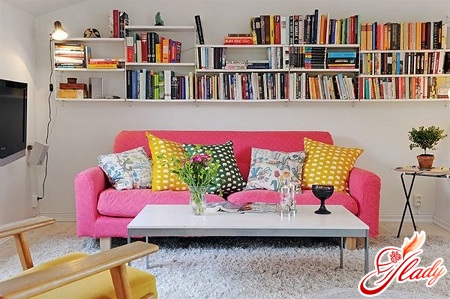 Well, if you are lucky and you are happyowner of a two-room apartment, the space for your imagination is even greater. After all, you have access to those decor elements that can not be realized in a one-room dwelling. Let's find out which ones - because good advice will never be superfluous.

In a two-room apartment you can refuse from screensand zonirovat space with the help of finishing materials. For example, tiles are replaced by parquet, and parquet - carpet or linoleum. The same applies to wallpaper - give preference to different colors and textures. It goes without saying that the combination of colors should be selected very carefully.

Designers recommend to use in the interiortwo-bedroom apartment as many mirrors as possible. Mirrors greatly enlarge the space visually and create the illusion of a large room. Professionals argue that the design of a small apartment for them is no less interesting than the design of large and multi-room dwellings - you can implement the most daring ideas. After all, we have to solve a more complicated "housing issue". And this task is quite up to them. So maybe these interesting ideas and useful tips for interior design of a very small apartment (or not very small, but still close) can help you find the best solution. On which option do you stop: creating a one-room studio, building tiers or a harmonious design without re-planning? Look for your own, exclusive solution to the eternal "housing issue"! After all, you probably already had original ideas? We advise you to read:

How to glue wallpaper on the ceiling?

New Year decor by own hands