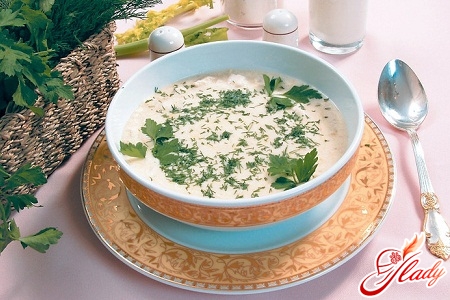 I must say that delicious and healthy soups, mashed potatoesare very common in Russian cuisine. They are rather the prerogative of European culinary specialists. Meanwhile, for example, a chicken soup-puree should definitely be included in the menu, as it is most suitable for all members of the family. First, the soup-puree on chicken broth - the dish is very satisfying, respectively, the male part will appreciate the ability to quickly satisfy the hunger. Secondly, the cream soup on chicken broth has enveloping properties, which means that it is ideal for people with diseases of the gastrointestinal tract. Thirdly, if you regularly include in your diet soup-puree on chicken broth, then the problems with the stomach will be forgotten once and for all. And, finally, puree soups are great for baby food. Each recipe, which we offer to your attention, has a certain zest and has its own special taste.

Soup with potatoes on chicken broth

Cooking method: First you need to cook chicken broth. In a pot of water, put the chicken, onions, carrots, roots, bay leaves, black pepper and fragrant, washed and chopped into several pieces and bring to a boil. Remove foam and cook over medium heat until meat is soft (this is the basic recipe for chicken broth). Peeled and cut large potatoes, pour the leeks with filtered broth and cook until the vegetables are ready. Put into the blender potatoes, leeks, chicken, boiled carrots and roots. Season with salt, pepper and beat, gradually adding broth to bring the soup to the desired consistency. Before serving, soup-mashed potatoes and sprinkled with finely chopped herbs.

Soup with mushrooms on chicken broth

Cooking method: In order to prepare soup-puree from champignons, mushrooms must be washed, cut and fried in butter together with onions. Pour broth and bring to a boil. Add potatoes and cook until ready. Strain. Put into the blender potatoes, mushrooms, chicken meat, season with salt, pepper, spices and beat, pouring broth, so that the mushroom soup acquired a normal consistency. Before serving, chicken soup with mushrooms and sprinkle with herbs. The recipe is simple enough, and the taste is piquant. 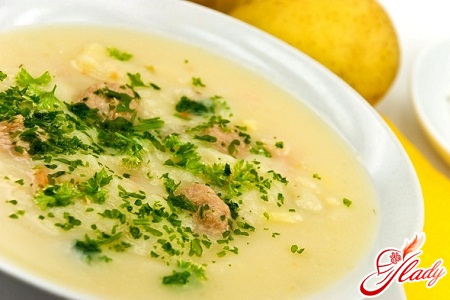 Soup with mashed potatoes and croutons

Cooking method: Pumpkin, leeks and potatoes pour broth and bring the vegetables to readiness, strain through a sieve. Load the boiled vegetables, meat, season with salt, pepper, spices and beat, adding broth (it can be prepared in advance). White bread cut into cubes and dried in a frying pan, previously rubbed with a clove of garlic. Sprinkle soup with cream and greens before serving.

Soup with cauliflower and cheese croutons

A way of preparation of soup-mash with toasts with cheese: Vegetables cut, pour broth and bring to readiness. Strain. Place in the blender boiled vegetables, meat, salt, pepper, add spices and beat, adding broth. Bread dried in a toaster. Pour the soup-puree into ceramic bowls (or pots) from above to put the dried bread and sprinkle it with grated cheese. Place under the grill for a few minutes to make the cheese melt. Sprinkle with greens before serving. The recipes of soups-mashed potatoes, which we offered to your attention, are quite simple in cooking, and the cooking time will take a little. Convenience lies in the fact that you do not have to worry about the correct cutting - vegetables can be cut quite large, all the same after whipping in a blender they will turn into a homogeneous, fairly thick mass. Changing the composition of the ingredients, you can each time to prepare the first dish with other flavoring accents. Chicken soup with mushrooms, potatoes, broccoli, spinach, tomatoes, cheese - the list goes on. Cook with pleasure. Bon Appetit! We advise you to read:

Delicious soup: recipe without harm to the figure

Borsch with beans: a recipe for soup

How to cook mushroom cream soup?