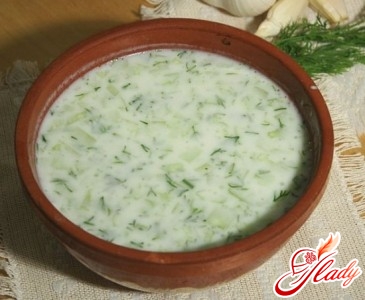 The birthplace of this famous soup is Bulgaria. And it is prepared on the basis of yogurt. Do not be mistaken and think that it is about yogurt, which is sold in any grocery store. This is a real Bulgarian yoghurt, which to taste something like kefir. Bulgarian yogurt stores a traditional ancient recipe, which was born during the great migration of peoples, namely in the 5-7 centuries. Transportation of milk in sheep's wineskins and the traditional way of storage, have made their business - this unique fermented milk product has appeared. As known Bulgarians are famous for their longevity, and explain this by the fact that they constantly consume sour milk, namely yogurt. This product prepares a famous soup tater, a recipe for cooking which Bulgarians transmit from generation to generation. Preparing this Bulgarian soup is quite simple: in yogurt is put a fresh grated cucumber, chopped nuts, garlic, dill, vinegar and vegetable oil. Since we can not buy Bulgarian yogurt, it is replaced with ordinary yogurt, which is no less useful. Kefir contains a lactic acid fungus, which is a microorganism, rod, streptococcus, yeast and bacteria. These microscopic organisms kill pathogens of tuberculosis and diseases of the gastrointestinal tract. It is worth mentioning about yogurt, as a toning and quenching thirst for a drink, and when preparing soup on kefir it is very welcome.

Preparation: Garlic finely chopped or squeezed through garlic, then add to kefir. Cucumber finely chop, also add to kefir, salt, add vegetable oil and vinegar. To stir thoroughly. Put in the refrigerator for one hour. When serving, place in each serving finely chopped dill and nuts. If the soup is very thick, then it is diluted with boiled cold water. Note: For the basis of this soup, you can use not only kefir. Many make this soup on ayran or matzoni. Instead of dill, add lemon balm, thyme, thyme, rosemary, parsley, green onions, basil and much more. Some housewives put radish and zucchini in soup. But most importantly - soup should be served cold and nothing else! 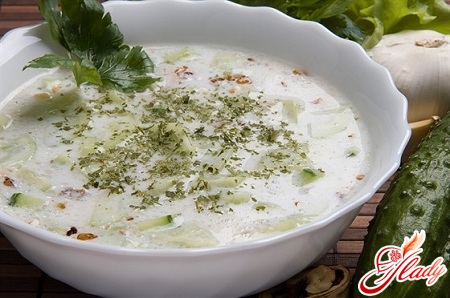 Soup with yoghurt and sour cream

Preparation: With a mixer, whip the sour cream with yoghurt. Add to the resulting mass of pepper and salt. Pour (continuously stirring) a thin trickle of vegetable oil, add chopped dill and cucumber. Before serving, put in the soup finely chopped nuts. Serve with the addition of ice cubes.

Preparation: Combine the mineral sparkling water with kefir and pour into a saucepan. Cucumbers grate on a large grater, then add to kefir and water. Nuts grind in a blender and put in a pan. Pepper fry in vegetable oil and add to the soup. Dill and garlic chop and add to the rest of the ingredients.

Preparation: Radish and cucumbers cut into cubes, chop the garlic finely and put in chilled kefir. Dill chopped, potatoes grate and also add to the rest of the ingredients. Pepper, salt. Sprinkle with greens before serving.

Preparation: Greens and cucumbers grind in a blender and add to kefir. Pour in half a glass of cold water, add the juice of one lemon, sprinkle with walnuts. Before serving, the soup should be thoroughly cooled and sprinkled with chopped green onions. As you can see, this famous Bulgarian soup is very similar to our no less famous okroshka. And therefore, for sure you will like it. Therefore, diversify your menu with the famous and delicious Bulgarian soup. Cook it in the summer heat and cook with pleasure! We advise you to read:

Tomato soup with seafood: a recipe for a traditional Italian dish