Traditionally in the Russian cuisine the first dish is alwayswas in the first place. Everyone knows that at lunch you should always use hot soup to be healthy. And today either the western trends have influenced, or science has reconsidered its opinion about the right and wrong nutrition and the benefits of daily use of soup during a lunch meal. Soup - this is quite a satisfying dish, but easily digestible, it helps to improve digestion. In boiled meat and vegetables, much more vitamins and nutrients are stored than with other types of heat treatment products. It is important, of course, to cook properly without digesting everything, because then nothing train can stay. Soups and broths are necessary for those who care about their appearance and health. Vegetable soups are indispensable for their preventive and stimulating properties. Moreover, the first dishes restore the fluid balance necessary for our body, which directly affects the level of blood pressure.

About the benefits of soups and broths

How beneficial is the use of soups for those whois set on diet food? With this soup the body will quickly be saturated, and the amount of energy that the body needs to digest the soup is the same as for the second dish. So it turns out that we eat less calories with soup, and burns the same number of calories as when using a full-fledged second. There are even diets based on soups. For example, soup of celery, which you can use in unlimited quantities. A colossal energy surge is felt when you use this dish, and even kilograms go away. The most indispensable soups and broths are chicken, which favorably affect the blood vessels. Chicken soup contains ingredients that have anti-inflammatory effect, even relieves cold symptoms. An ideal combination of taste is chicken soup with noodles. In this article, you will be able to choose a recipe of this dish that is suitable for you with a detailed description of its preparation. 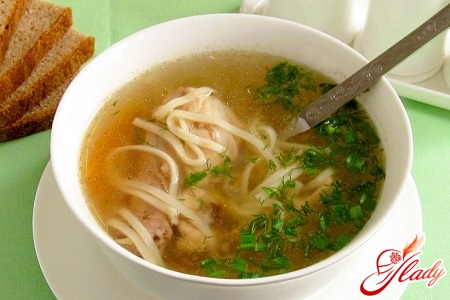 Traditional composition of soup with noodles

Chicken soup with noodles consists of:

The first step is to prepare a strong chicken broth. To do this, take our chicken (not frozen), wash it, clean it, dry it with water. Then we remove all the skin and fat from the carcass. Now cut into 4 parts, you can cut more finely, the main thing is to get into the pan well entered. I put onion, celery, bell pepper, chili, bay leaf, dill and finally our chicken. Fill all with boiling water, so that the water only slightly covers the vegetables and meat, and put on the fire. We bring the broth to a boil, we reduce the fire (so that the broth does not become cloudy). Then you should carefully monitor the fact that you do not miss the moment to remove the scum with a noisy or spoon in the hole, to whom it is convenient. If you see that the broth is still getting unclear, you can gradually add a little water, with a thin trickle. Another trick that can be used to obtain a clear broth is the onion. It must be gently peeled from the husks on both sides as close to the edges of the tail as possible so as not to damage the entire structure of the garments of the bulb itself. And now it's time to salt the broth. We leave the broth to boil for half an hour on low heat. As a result, we will get a very tasty chicken and strong, rich broth. Cook the chicken soup Take out all the ready-made chicken meat from the pan, put it in a bowl and cover the chicken with a food film to make the meat a little cool, but not weather-beaten. Noisy should get from the broth the rest: onions, celery and spices. And it's better to strain the broth, then our chicken soup will become more beautiful. Now put our chicken broth in a saucepan on the fire. After the broth boils, add the noodles, finely chopped straws carrots. While the chicken soup is boiling on a small fire, we will tackle the chicken. Separate our boiled chicken from the bones, cut the meat into medium pieces. Add the meat of the chicken in the soup and leave it on the fire for another couple of minutes. So our recipe is ready! In order to make the soup even tastier, it is better to let it brew for 5-10 minutes. But you can serve soup sprinkled with finely chopped herbs. Of course, it will be more delicious to cook soup from chicken meat with noodles, if you take the recipe for cooking homemade noodles and cook it for soup yourself! Let us examine the recipe for this particular dish. 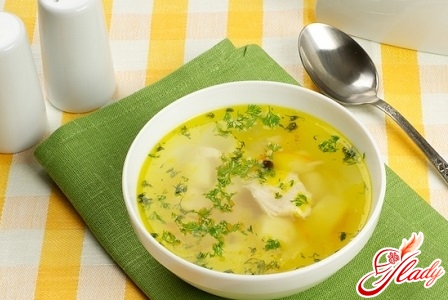 This recipe will not leave anyone indifferent! And his look is so appetizing that even a dislike of the first dishes will want to try at least a spoonful. Ingredients required for cooking:

So, the recipe for cooking noodles at homeis simple. We take an egg, break it into a bowl, add salt and whisk. Then add 20 ml of water and beat well, you can whisk, and then add flour. Knead a very steep dough. Now the dough can roll out a thin-thin layer and leave alone for half an hour. Let's go on to preparing the main course. We clean the onion, cut it with very small straws. Chicken fillet should be washed and wiped with a paper towel. Also cut it into small equal pieces. We take a frying pan, warm it with lean oil and put the meat and onions there. Gently stirring, fry until half cooked. We carefully watch that products are not burnt. Carrots are cleaned and rubbed on a large grater. We put a pan on the fire and put the prepared ingredients there: fried chicken with onions and carrots, - and pour all half of the broth prepared beforehand. Add the bay leaf. Leave to languish under the lid for about 20 minutes. We return to our noodles. With a sharp knife we ​​cut the rolled dough into thin strips. Here noodles and ready! You can already add it to the soup, which we do. Pour out the rest of the broth and cook for another 10 minutes. Then turn off the heat and let's brew our dishes for 10 minutes under the lid. Pour into a deep plate, decorate with greens and a pleasant appetite! For lovers of more exotic cuisine - the next recipe for soup noodles with chicken. The recipe for this first course consists of the following ingredients:

Let's start cooking. For this, let's start with the broth. The soup set is washed and dipped in a saucepan with cold water. We put on the fire, bring to a boil. We remove the formed scum, when the scum ceases to stand out, we fall asleep vegetables. Carrots cut along in half, onions are cleaned entirely, chili, oregano, cinnamon - we put everything in a saucepan. We bring to a boil and reduce the fire to the very minimum. Then add the rice vinegar and soy sauce to the boiling mixture. Solim to taste. Cook the broth for at least an hour and a half. In the meantime, let's take care of the rest of the ingredients. Prepare the noodles themselves Chicken egg with water, salt, butter and flour mixed in the dough. How to knead the dough, we have already considered, so we will not repeat. We roll out the dough with a rolling pin and cut it very thinly to make it look like spaghetti. Leave a little to dry. Now we turn to cutting vegetables for refueling. We cut the stem of a leek on the lengthwise in half, take out the middle, put it aside. The remaining plates of onions are shredded with thin straws. It is important that all the ingredients in this dish are cut equally - straw. The cut leeks should be rinsed in cold water and wrung out. You can sprinkle with rice vinegar. Then we cut the rest of the vegetables. Chicken fillet throw in the broth and leave until done. While it's cooked here, fry the vegetables lightly, so that they do not lose their crunchiness. In the pan, add soy sauce, you can also drop sesame oil. Now we repeat the same actions with frying with boiled chicken fillet. As soon as the crust on the meat is browned, take it out and cut it into slices. Next, the broth should be filtered and boiled noodles. And to make it easy. The water should boil, after which you need to add salt to it and throw the noodles for a couple of minutes, then throw it back in a colander, and it's ready. Boil the egg, peel, cut in half. We spread out noodles, fried vegetables, half egg, meat, and all this is filled with broth. You can serve!

We cut the chicken into small pieces, fill it with water. We need 4 sheets of water. We bring to a boil, reduce the fire, remove the scum, cook for half an hour. Then we take out the meat, and let the broth continue to boil on low heat. Separate the meat from the bones. The separated bones are put back into the broth and cook for about 45 minutes on low heat. Cut the carrots and celery into cubes. We remove the bones from the broth and add the cut vegetables into it. We add turmeric and salt, pepper. Sprinkle with parsley and cook for another 10 minutes. Add pre-cooked homemade noodles in boiling broth, chopped chicken and cook for another 5 minutes. Mix the flour with a little water and pour the mixture into a saucepan. Another 5 minutes, and you're done!

This recipe consists of the following ingredients:

The peculiarity of this soup is the unusual noodlesform. It is widely cut and folded into a lump that looks like a nest. It is brewed quickly and does not crumble, keeps its shape, so even in ready form, such noodles remain like a nest, and chicks can put carrots or potatoes there, which will arouse the interest of your kids before dinner. After all, it is important not only to cook delicious food, but also to serve it appetizingly. So, let's prepare this recipe. Bring to a boil 1.5 liters of water. Throw chicken legs in there and cook broth. We remove foam, add bay leaf and salt. Cook broth for about an hour. Then we'll get a chicken and a bay leaf. Attention, cunning! If the broth is not transparent, it needs to be clarified. The easiest way to lighten is to pour well-beaten egg whites into the soured bouillon, bring to a boil, and then strain. We clean carrots and parsley root. Cut straws or cubes. Peel garlic, cut potatoes into small rectangles or triangles. Onion is better to take small, so as not to cut it, but to quit cooking whole. Add vegetables to the boiling broth at the same time. We pepper it with a pinch of dry fragrant herbs. Cook the soup on low heat for 15 minutes after boiling. Now it's time to cook noodles. We put the noodles and, not stirring, cook on low heat for a couple of minutes. As always, you can decorate the soup with finely chopped herbs and serve. Bon Appetit!!!