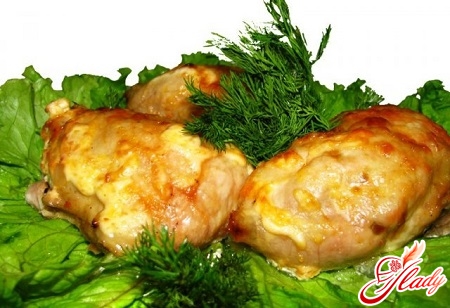 Chicken meat is considered dietary, it is tender anddelicious, quickly prepared. You can simply boil the chicken or put it out, you can fry in a skillet. Chicken is made roast, pilaf. But the most delicious chicken baked in the oven. And if it is sprinkled with grated cheese on top, the chicken meat becomes especially juicy, it forms a crusty crust. Such a dish will provide the hostess with praise from all her household members.

What do you need to know to prepare this dish?

The process of baking in the oven of a chicken is not complicated. But still it is worth considering several preparatory moments, such as the choice of the bird and the form in which it will be baked, the temperature regime. Experienced housewives know that a small chicken with a weight of 1-1.5 kg is best suited. You should pay attention to the age of the bird, preference is given to chickens under 1 year - their meat is more tender. You can distinguish a young chicken by the color of the skin - it should be pale pink, without spots, and the fat is light yellow. In the old bird, the fat is dark yellow, the skin is gray-yellow. A form for baking can be used either completely or completely without it, placing the carcass of the bird directly on the baking tray. But in thick-walled forms the chicken is baked evenly. The size of the mold should be slightly larger than the carcass, then the secreted chicken juice will not spread over the bottom surface and burn. Best suited, the so-called, utyatnitsy - cast-iron oval containers with a lid. Now on sale have appeared fireproof glass forms with thick walls. To the chicken, sprinkled with cheese, it turned out really tasty, it is necessary to correctly determine the time and temperature at which it will be baked. The oven is preheated to 180-200 °. How long to keep the bird in the oven can be determined from the following rule - each kilogram of carcass weight is baked for 40 minutes, i.e. A bird weighing 1.5 kg should be kept in the oven for at least an hour. 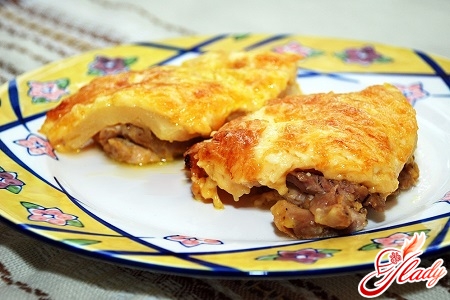 To cook chicken with cheese washed andThe dried carcase is rubbed with salt, pepper and garlic. In the form to the bottom pour a little olive oil, put the carcass of the bird. When the chicken meat is soaked with salt and spices, cover it with a lid and put it in the oven. It is necessary to set the furnace timer for 30 minutes. Cover the cover so that the meat is more evenly baked. While the chicken is in the oven, you need to rub any hard cheese, preferably sharp. The best option would be Parmesan. Grated cheese is mixed with sour cream. Mayonnaise is better not to use, t. he will give the chicken a specific smell of vinegar and extra fat, which is also not desirable. After 30 minutes, remove the mold from the oven and open the lid. When the steam stops so much rising, smear the semi-prepared carcass with a mixture of sour cream and cheese. Further, the chicken in the form without a lid is baked in the oven for another 30 minutes. The chicken's readiness can be determined by piercing the breast with a wooden toothpick - if the juice flows clear at the puncture site, the chicken is ready. This recipe will require the following ingredients:

The main recipe can bediversify, for example, carcass of chicken stuffed with vegetables with the addition of fruits and herbs. When baking, vegetable fats further impregnate meat, but rice or buckwheat as a stuffing, on the contrary, takes the juices to themselves. Adding lemon or orange to vegetable mince will add a special piquancy to the taste of chicken. This dish is worthy and festive table.

Baked potato with chicken: an appetizing dish, favorite by all

Dishes from green tomatoes: recipes, blanks for the winter