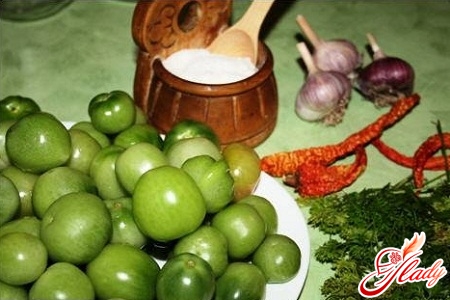 It would seem that not ripe, bitter in tastegreen tomatoes do not represent any value, but this is far from the case. Different peoples from them cook many excellent dishes. These are salads, snacks, even jams and candied fruits. And to salt green tomatoes for the winter is a long tradition and they are served as a savory snack.

This recipe dish of green tomatoes is enoughsimple, but the result is a great snack, which is called with a twinkle: It is perfect for hot potatoes and strong spirits, without which the festive table is rarely spent. Ingredients:

Cooking method: For the recipe, you need small green tomatoes, about the size of an egg. Tomatoes are cut so that the top cut piece resembles a lid covering the whole tomato. Filling: First you need to prepare the filling for stuffing green tomatoes. The filling includes finely chopped parsley greens, chopped garlic with thin plates, bitter pepper - finest ringlets, grated carrot on a large grater. Brine: Water is brought to a boil, dill, sweet pea, bay leaves and salt are put there. The brine is allowed to boil for 5 minutes and after that it is set aside to cool. After it has cooled, a laurel leaf and sweet pea are extracted from it - they will no longer be needed for pickling. Salt: Prepared tomatoes raise the lid and put the stuffing there, then tightly press it. Tomatoes are laid in a dense layer and poured with cooled brine, the dill umbrellas should be covered with brine, so they must be placed between the tomatoes. For tomatoes put a suitable size plate and put pressure, so that the pickle completely closed the tomatoes. The saucepan is placed in a cool place so that the tomatoes are fermented. This can take from 4 to 7 days. The cooking time depends on the air temperature and the size of the green tomatoes. To determine the degree of readiness, you can cut a piece and try. After the process of salting is over, tomatoes and dill umbrellas are transferred to clean glass jars, covered with plastic lids and put in a refrigerator.

The tomatoes for this recipe have a wonderfulpickled taste. And like all the snacks of Georgian cuisine - they smell of spices and do not let forget what a bitter pepper is. Tomatoes for this recipes should be milk ripeness, that is, their flesh should not be bright green, but whitish. A small rosy is permissible, which indicates that there is already little bitterness in tomatoes. Ingredients:

Cooking method: Green tomatoes are cut into slices, for this they are divided into 6 or 8 parts. The chopped tomatoes are piled in a basin and salt, mixing well. Do this with one goal in order to get rid of the bitter juice. Salted tomatoes are left in the basin for a day, after which the bitter juice that has appeared is drained off. To the tomatoes, add finely chopped garlic, greens, bitter pepper and onions cut into half rings. Then, vegetable oil, apple cider vinegar and hops-suneli are poured into the pelvis. This salad is boiled in the pelvis for about 5-8 minutes. Store this salad in lid closed jars in the refrigerator.

Than this sharp snack is good, so it's thatYou can eat tomatoes just two hours after cooking. Sometimes such precocity can become a wand-a help, when you want an unusual and bright taste of the dish. Tomatoes should be selected for milk maturity, and to ensure that the lobules are equal and look beautiful in their finished form, tomatoes should be of the same size if possible. Ingredients:

Cooking method: Tomatoes are cut in equal slices, and for this they are very simple - they cut the tomato in half, and then each rug is divided into three parts. Scroll on a meat grinder or grind it in any available way: bitter, sweet pepper and garlic. This mixture is added to the tomatoes, salt is also added to the sugar and vinegar. All mix, immediately put in a clean glass jars and put in the refrigerator, where the appetizer can be stored for a long time, but it can be served to the table in 2-3 hours. 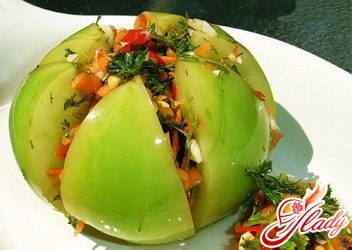 This dish can be harvested for the winter, but you cancook for a variety of menus when the season of green tomatoes comes. This vegetable bouquet has an unusual taste and, of course, it is rich in vitamins. Ingredients:

Cooking method: The correct cutting of vegetables is very important in this salad. Tomatoes cut into circles, onions - rings, carrots and parsley roots rub on a large grater, sweet pepper cut into strips, bitter finely chopped. Initially, tomatoes are salted and set aside for 10-12 hours to get rid of the bitter juice, which is then drained off. Then the vegetables are mixed and added with granulated sugar, which balances the remaining bitterness of the tomato. Vegetables are fried in batches to get rid of excess moisture, in the process of salting to taste. Then they put everything in a large container, add all the spices and stew for about an hour under a closed lid. If the eggs are harvested for the winter, then it is laid out on cans and additionally sterilized: half-liter cans - 5-7 minutes, liter - 10 minutes.

This soup-puree from the category of unusual, but properly cooked, it will leave a good impression, despite all its originality. Ingredients:

Cooking method: Onion finely cut and lightly fried in butter. Green tomatoes are cut into slices, about 1.5 centimeters thick and cooked together with onions in a small amount of water until softened. Then put chopped carrots, parsley, rice. All this is poured with chicken or other broth, salt to taste, put sugar and garlic. Cook for about 10-15 minutes, until finally cooked rice. After that, the soup is poured into a blender and the vegetables are crushed to a pasty state. Then you need to boil the soup again, but do it over low heat. At the same time, be sure that it does not burn out. When the soup is served on the table, it is sprinkled with greens and crumbs of white bread.

This is one of the most exotic types of jam, ithas an interesting for nothing unlike the taste and hardly anyone without a clue will guess that this jam is from tomatoes. To avoid excessive bitterness, tomatoes take on a milk maturity. Ingredients:

Cooking method: Tomatoes are cut crosswise and the spoon carefully selects the seeds. Then they are poured with boiling water and allowed to stand for 5 minutes, boiling water is drained and the tomatoes are poured cold water. After this procedure, peel is removed from them, which will only spoil the appearance of the jam. Then the tomatoes are poured again with water, brought to a boil, boiled for 5 minutes and thrown back to a colander, so that bitterness came out with the water. After the tomatoes are well-glassed, they are transferred to a bowl, which will already be brewed with jam, and covered with sugar. In order to form a syrup, add 1 cup sugar. Cook the jam in 2-3 drops until the syrup thickens. At the very end of the cooking, citric acid is added for taste and then the jam is poured into sterilized jars. For everyone who types in the search bar: blanks for the winter recipes photo green tomatoes, we offer the best of recipes that can qualify for the brand name for every home. We advise you to read:

Recipe meat in French with potatoes