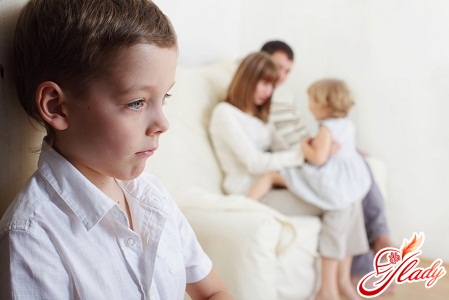 After giving birth, it is difficult for a woman to cope withtwo children, and she tries to send the older child to her grandmother. As a result, the child suffers from jealousy, because Mom is now not only him! When a second child appears in the family, the grandmothers begin to lament that the eldest childhood is over. If the difference between children is 2 or 3 years, the child still does not understand the meaning of the words spoken. But if between the children, as often happens, the difference is 6 years, then one can imagine what is happening in the soul of the eldest. And now it depends only on the parents how the relations between the older and younger children will develop in the future.

How is jealousy manifested?

When a woman is waiting for a second child, she spends most of her pregnancy with her first child. He paid attention to, bought radio-controlled, soft or

. Mom has enough time and on the playgroundgo and read a fairy tale. When it comes to childbirth, a woman becomes heavier and grandmothers come to help. Now the elder is more with the grandmother, and after giving birth she has been living with her for some time. Is it correct? From the point of view of the calmness of the child and the removal of the burden from the mother - is undoubtedly correct. But from the point of view of a child who misses his mother, in his room, on his bed, toys, this state of things is not entirely accurate. After all, for the harmonious development of the child is important daily attention from the parents. He can not, and does not want to wean from the fact that with the advent of a little brother or sister it is necessary to divide the mother, that she no longer belongs to him completely. And then the older child can easily hit the baby, hide the bottle, constantly be capricious, making life even more difficult for the tired mother. And my grandmother will behave calmly, letting me know that everything would be fine if that little man did not appear.

In the beginning, when the crumb was only brought from the hospital,older daughter or son should try to explain that a little will have to stay with my grandmother, but that necessarily every day the parents will see him. It's even better if the grandmother of the week lives with her family and helps her mother cope with the newborn and the older child. Prepare food, holds the elder in kindergarten or school, will meet. Dad, for sure, works and comes home only in the evening and therefore does not have time to do all this himself. Even if the child has to be sent to grandmothers for a while, he needs to explain the reason for his long stay at a distance, gradually increasing the time spent together. And at the first opportunity, when a woman feels more free, the child should be returned home. To the elder did not feel jealousy, a woman should exercise tact and endurance, gradually accustoming the older child to the baby. Ask for a pacifier, bring a bottle from the kitchen, deploy the diaper. Yes, there are many other small matters that can be entrusted to the elder child. Let him feel that his mother can not cope without him, and his younger brother or sister is bored if he is not around. And then there will come a time when there will be no trace of childish jealousy, and he will even allow the younger brother or sister to touch the finger of a loved one

. We advise you to read:

Nanny without work experience in the family. Advantages and disadvantages.

Transportation of children under 12 years in the car

Bribes in school and kindergarten

Is it possible for children to watch TV