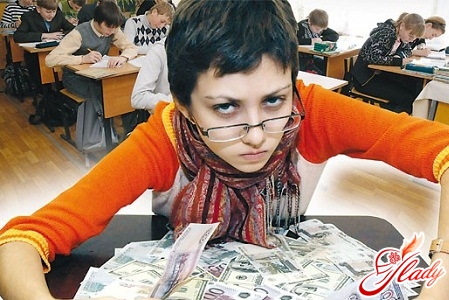 Bribes in school recently, alas, have becomealmost universally widespread. Even 15 to 20 years ago the very idea that at school they can demand money for anything other than feeding children could not have occurred to anyone, but today it's hard for parents to imagine a school that does not hold monthly but then at all weekly picks. And, in spite of the fact that the teachers and the school authorities call these monetary bonuses harmonious formulation "for the needs of the school", the fact remains that they are absolutely illegal. Moreover, this is well known to the higher leadership, which, unfortunately, gives its tacit consent, justifying these charges by the fact that the state finances schools very poorly. However, this is not just an excuse, and not a reason to "rip" parents as a stick. Despite the fact that extortion of money is common for many schools, it is possible and necessary to combat this. Fortunately, recently parents have stopped silently referring money to school, but have largely intensified. More and more cautious, literate and legally savvy parents are trying their best to find the truth and understand how legitimate these or other kinds of money are in each specific case. In the event that you are tired of feeling like a "cash cow" for teachers, this article is written for you. Having the necessary minimum of knowledge, you will be able to resist the arbitrariness of teachers who require more and more money injections. Yes, and parents preschool this material can also become very useful, since they have to spend money at least no less, and the school is probably already around the corner.

What do I have to pay for at school?

For what often do you have to pay the parents of schoolchildren? Of course, different schools can have their own peculiarities and nuances, but the overall list is still the same:

In very many schools, especially those inprestigious areas, so that the child was accepted to study in it, they demand to pay the so-called entrance fee. But that's not all - often this entry fee is just a payment for allowing the child to enter the original entrance examinations. And only in the event that the child passes them successfully, it is written down in the first class. Especially often in a similar situation fall those future first-graders who live not in the area in which the school is located. However, in fact, all these measures are absolutely illegal. In the event that there are still places in the school, the child must be accepted without any tests and entrance examinations. By law, any examinations in elementary school are generally strictly prohibited. Well, if there are no more places, then take the child, respectively, the school can not already with all desire. But how do you know if there are these very places? It is not necessary to conduct any oral negotiations with the director - in case of any conflict situations you will not have any evidence. Write an official written request to the principal of the school, and a request to enroll for training in your child's first class. And be sure to notify the teachers that you are expecting a written response. In the event that you receive a refusal, you can always find out if there were actually vacant seats in the education department to which the school you choose belongs.

The second favorite point of drawing money fromparents - this is paid extra lessons with the child in general subjects, circles and sections. In this case, parents should ask whether the educational institution has an appropriate license. They can only be provided if the school has a license and all the relevant permits.

This point is also far from the lastplace in the article collecting money from parents. To give or not, it's up to you. In any case, exclude a child from school in the event that you do not pay these costs, no one has the right. However, if you decide to help the school and hand over the money, remember the main thing - never give money from hand to hand. Each school has its own settlement account, to which parents can transfer money for school needs. As a rule, you can transfer the money either by bank transfer or through the centralized department of the city or district education department, where you will be given a receipt in your hands. At school, on your first request, you should show a detailed report, which accurately indicates the amount and what was spent. Moreover, all expenses should be confirmed by the appropriate documentation - checks, spending orders and other things. This is necessary for parents to know exactly where their money was spent. Otherwise, any money charges are considered illegal, and the school violates the law on free education.

A significant expense item is theschool celebrations. And if for small holidays the amount is quite lifting, then the graduation party is a real disaster for most families. And it's not surprising - sociologists have calculated that last year the average for Russia sum, handed over by parents for the prom, was 10 thousand rubles. Agree, in general, it turns out a very impressive amount, which you can play a whole wedding, not that the graduation party. Of course, at the parents' meeting it is worthwhile to carefully discuss this issue, taking into account the material possibilities of all parents. Perhaps you should abandon the most fashionable restaurant in the city and prefer a more modest cafe? And, besides, remember that you should be able to always check where your money will be spent. Unfortunately, not all people are clean, and sometimes it happens that a significant part of the collected money settles in the pockets of the members of the parent committee and the class teacher.

The first of September, Teacher's Day. New Year, March 8, again - graduation - in many schools it is customary to give teachers gifts for these holidays. And a modest bouquet of flowers and a box of sweets a long time ago - have sunk into oblivion. Now the cost of the gift is estimated in thousands of rubles, and in some cases - tens of thousands. To hand over or not? In principle, it's up to you, but remember that this case is completely voluntary. 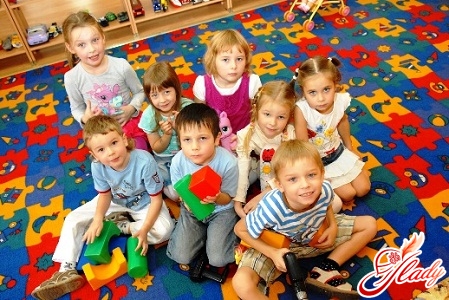 Picks in the kindergarten

There is no less completely just perturbation inparents are also affected by the situation in kindergartens. Unfortunately, it is not a secret for anyone that the problem with the availability of places in kindergartens in Russia is very deplorable, and it is extremely difficult and extremely difficult to get there. This is what the excessively enterprising managers of kindergartens are using, inventing every time more and more new reasons for money from parents of kids. And parents obediently pay bribes to the kindergarten. And these same contributions begin from the very beginning, and even more precisely - it is from them that the visit to the kindergarten begins. In order for your child to be able to go to kindergarten, you may be required from 5 to 30 thousand rubles, depending on the region. Such cases, unfortunately, are not an exception to the rules, but rather a frightening tendency. And, unfortunately, the parents themselves encourage her development, resignedly carrying the money to the kindergarten, if each time the extortion of money for the adoption of a child in kindergarten parents turned to higher authorities, then the cases of such would become less and less. However, even if the child managed to get into the kindergarten without any entrance fees, or, more simply, without a bribe, the parents should be prepared for the fact that monetary payments will become a regular service for them, practically a way of life. And the reasons for the extortion are practically the same as in schools:

Often, parents are asked to turn in money forvarious household items for children - for bed linen, towels, toys, household goods - soap, powder and so on. And very often parents are genuinely puzzled - why give money to some items of expenditure such as buying bed linen or toys several times a year? After all, it is unlikely that something will happen for several months with two sets of bed linen for several months, during which the child slept on it for several hours during a quiet hour. And this is really so - often some, if not most of the money that parents give away, goes absolutely incomprehensibly where. More precisely, it is clear - to the parent committee, educator, and manager. Remember that in this case the same scheme operates as in school - do not give money in hands. They must be transferred to a special account of the kindergarten. If the collection of money is solely the initiative of the parent committee, and you decided to support it, remember that you have every right to demand a full report - all checks and outlays. And, in addition, do not forget that all these donations are purely voluntary, and in no case should be attributed to the parents. In the kindergarten there is no bed linen? Nothing prevents you to buy two sets of bed linen on your own. No dishes? You can also buy it yourself and take it to a kindergarten, do not you?

In the older group, parents are often obligedpay for the preparation of the child for school. However, remember that all training is absolutely free. And to prepare for the money at the kindergarten there must be a corresponding license. Otherwise, the demand for money is absolutely illegal. Parents should never forget that as long as their parents think about how to give a bribe to a kindergarten or school, they will be dragged with money. So maybe it's time to stop this financial mess? We advise you to read: