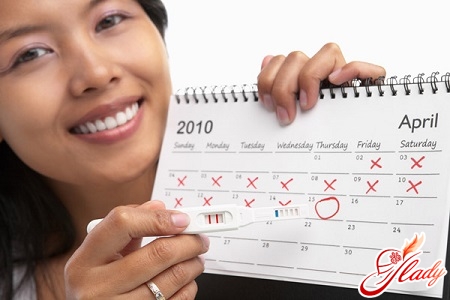 For many couples who would like to have a babyor, conversely, to refrain from unwanted pregnancy, there are various ways to do both. One of them suggests the possibility of calculating the day of ovulation, for which the woman is offered to use one of the methods, which is known as the ovulation calendar. To say that many families are responsibly approaching the issue of pregnancy planning is to slack. The question of how to correctly calculate ovulation for conceiving a child is asked only when there are some problems and for a long time can not conceive a child. Running ahead, it is worth noting that the reliability of this method is criticized by those who want to conceive a child, and those who know about the time of ovulation uses to prevent unwanted pregnancy or prevent it. Calculate the day of ovulation is quite possible independently, without the use of automated online services. However, specially designed calculators can greatly simplify this task. But for yourself you need to know how to count ovulation and what this calculation is designed for, and do not consider such a calculator the invention of shamans, magicians or charlatans. What is the basis for the ovulation calendar? This method is a natural way of planning the desired conception, which is an indubitable plus. It consists that the woman calculates in a menstrual cycle "safe" (when it is impossible to become pregnant) and "dangerous" (the probability to become pregnant very high) days. Now consider the mechanism of the ovulation calculator from the point of view of the processes taking place in the female body. At once it is necessary to make a reservation that to use this method of conception it is necessary only for those women who have regular menstruation. You need to know your cycle exactly. This will allow you to use the calendar correctly and find out exactly the woman the right time and date. With ovulation in an irregular cycle, if you can not have accurate data, when the next menstruation starts, it is not recommended to use this calendar. So, with regular menstruation every 28 days, ovulation is most likely on the 15th day of the monthly cycle. However, it is necessary to take into account its probability two days earlier or later, that is on 13, 14 or 16, 17 days of this cycle. Calculation of ovulation also requires that spermatozoa can live more than 3 days, and the egg remains ready for fertilization during the day. The active period is 5 days of the period of possible ovulation plus 4 days of possible sperm life plus 1 day of egg preparation for fertilization. As a result, we get 10 days of a special period, which lasts from 9 to 18 days of the monthly cycle, the period that should be used to conceive a child. Regardless of what the duration of the menstrual cycle is for a woman, and it can be from 21 days to 40 days, to use the ovulation calendar, she must actively use for sex period for 10 days, the first day of which starts twenty days before menstruation. For example, a woman knows that her month will begin on January 28. This means that its "special period" begins on January 9 and lasts until January 18 inclusive.

Using the ovulation calculator, you getsuch advantages as its free-of-charge, availability in any conditions, absence of necessity of medicamental intervention, but it also has serious drawbacks. First, it will be difficult to orient a woman with ovulation with an irregular cycle. If you do not know when you will start the next month, it's difficult to calculate the period of ovulation accurately. Therefore, a woman who has difficulty with conception and who has an irregular menstrual cycle should not count on the help of calculators. Secondly, this method is not suitable for those couples who have problems with conception due to deviations in health. Here, no matter how you calculate the time and date on the calculators, you can not do without medical assistance. The most ineffective method of contraception

The method of calculating the day of ovulation as for prevention,so for pregnancy is very unreliable. Considering all its simplicity and general approach, the ovulation calculator does not allow you to calculate its date and date accurately enough. Those who try to protect themselves with it, complain that its effectiveness is low. It is right. To use the ovulation calculator for protection is to use the most ineffective method of contraception. In order for the pregnancy to be desirable, so that the presence of two strips on the test did not cloud the mood of both partners, contraceptive methods were invented that are likely to reliably protect a woman. These are condoms, male and female, and vaginal rings, and oral contraceptives, and contraceptive injections, as well as implants and intrauterine spirals, and even sterilization, both male (vasectomy) and female. All these methods of contraception are reliable at 80-100%. Despite all its popularity, the ovulation calendar is very unreliable, although quite popular. It is popular, at least, where the population simply does not have money for the most necessary things: food, shelter, medical care, general education. Then a calculator or calendar can come to the rescue. Why is he the most unreliable? According to experts, out of every hundred women who used this method, 9 to 40 women became pregnant. That is, its effectiveness as a contraceptive varies from 60 to 91%, while the main means of contraception give a figure of 80-100% and the error of each of these species is very small. For example, if the effectiveness of the male condom is 85%, then its error may vary within 2-3%. This is correct provided that you have purchased it in a pharmacy, and not in some dubious place. In comparison with this tool, the error of 31%, given by the calendar and the ovulation calculator, is extremely large and unreliable, and its use on this basis is a big question. As mentioned above, for women with ovulation with an irregular cycle, the effectiveness of this method of contraception is even lower, since the timing calculation will be very approximate and no calendar and calculator will help you here.

We will weigh the pros and cons

Ovulation Calendar as a way to determineterm of ovulation, can be used as additional means which will help both to become pregnant, and to prevent an unwanted pregnancy. After all, the time can be set more accurately, without resorting to the help of the calendar. And to entrust your destiny to the cheapest and unreliable method of both contraception and pregnancy planning is hardly reasonable. You can calculate the ovulation with your calendar, and depending on what you want to do, use more reliable means as the main methods and methods of contraception. Think about whether you need savings that can lead to undesirable consequences.

Pain during sex in the lower abdomen