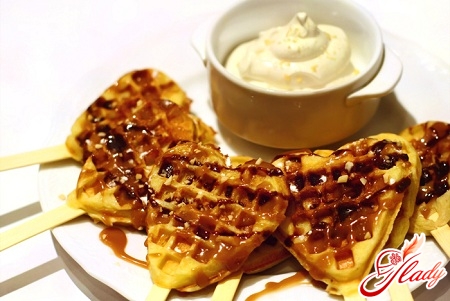 That's what you imagine when you say the word"Waffles"? Most likely, your imagination draws pale yellowish thin and fragile platelets with a pattern in a box, assembled in multi-layered wafer bars with some chocolate or cream filling. In any case, the confectionery industry offers us nothing else. Well, even wafer cakes for cake or waffle crumbs for some branded candy. Oh yes! And waffle cups for ice cream! Those of us, whose childhood passed under the sound of crispy waffle cones with condensed milk, remember other wafers. Crispy and crispy - those that are for waffle horns, but also soft, lush, with an astounding aroma and just divine taste. Baked such wafers in an antediluvian (from today's point of view) waffle iron directly on the stove. And our grandmothers and mothers did not guess that they were using the recipe of Belgian waffles. And they were not called waffles, considering a special type of homemade cookies. Meanwhile, in Belgium, such wafers are rightfully considered one of the cultural attractions of the country. True, lush wafers are prepared not only at home, but also in other countries. Moreover, they are called Belgian anywhere, but not in Belgium itself. And the real wafers from Belgium are Flemish, Liege and Brussels. These wafers are made from a yeast dough or a dough mixed with beer. In the American version, Belgian wafers are made from dough with a baking powder (baking powder). We offer you original recipes, on which you can prepare real Belgian waffles or the most famous ones.

Waffles is a special type of dry biscuit. And invented waffles were German-speaking peoples for a very, very long time. According to some sources, for the first time wafers appeared in Germany in the 13th century. And their name was obtained from the word Wabe, which the ancient Franks called bee honeycombs. But the Belgian waffles seem to have their own independent history, since they are prepared from a special test and were invented by the court chef of Prince Liege. In Belgium, the recipe for waffles is known in two main versions - Liege wafers and Brussels waffles. The first wafers are round and solid cookies, inside of which are pieces of caramelized sugar or, as they are also called, sugar pearls. Soft and curvy Brussels waffles look more like baked pancakes. Brussels wafers are made from yeast dough, and another variety of Belgian wafers is called Flemish waffles. Sometimes the recipe for Belgian waffles includes beer instead of yeast. And if in Belgium this delicacy was known since the 18th century, the rest of the world learned about it after the World Exhibition in 1958 (yes, culinary achievements at this exhibition are also appreciated!). Belgian sweet wafers appealed to the taste of Europeans, Americans, and Soviet citizens. And in the USSR even began to produce special waffle-makers of round shape, wafers in which you could cook directly on the stove. Americans modernized the recipe for Belgian waffles, replacing the yeast with baking powder. But anyway, and the original recipe for this confectionery product has remained unchanged to this day. Try different recipes of Belgian wafers and appreciate this amazing culinary invention. 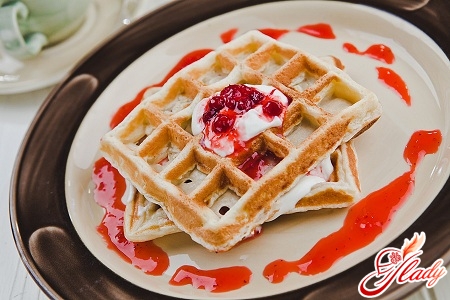 This is a recipe for wafers made from dough foryeast. Flemish wafers are lush, soft, sweet and very tender. And serve them with creamy vanilla sauce, fruit syrup or ordinary condensed milk. Ingredients:

Preparation: Yeast is diluted in a quarter cup of warm milk and leave until they foam. Then we sift the flour into a bowl and mix it with salt. Now we collect flour with a pea, make a hole in this hill and break it into one raw egg, and also pour out the foamed yeast and pour out all the sugar. Mix and add milk and three egg yolks. Then knead the dough until smooth. At the very end of the mix, add cognac, vanilla sugar and melted (not hot!) Butter to the dough. We mix thoroughly again. Now beat the egg whites into a soft, firm foam and gently knead them into the dough, adding in small portions. Cover the bowl with the test with a clean towel and put it in a warm place for about an hour. Ready dough knead and bake waffles in a hot waffle iron. Serve immediately after preparation. Flemish wafers should be eaten immediately, as they say, with a heat with a heat. Because freshly baked waffles have a crisp crust and a lush soft center. If these waffles lie down a little and cool, they will become very soft and more like our traditional pancakes.

The recipe for this version of the Belgian wafflesIt is noteworthy that the dough for them is cooked on beer. Traditional Boussel wafers are not very sweet, soft and lush. These rectangular wafers are served with fresh strawberries and bananas, as well as seasoned with whipped cream, jam or simply sprinkled with powdered sugar. So, for wafers in Brussels we need the following ingredients:

Preparation: In a separate bowl, mix all the dry ingredients: flour, salt and vanilla sugar. Grate lemon zest on the grater and squeeze out lemon juice. The zedra is added to the flour, and the juice is poured into a separate bowl. Then add the beer, vegetable oil and egg to the juice and beat this mixture. Now connect both mixtures and knead the dough. Leave the dough to go for two hours, and then bake the wafers in a special form or in an electric wafer about three minutes. 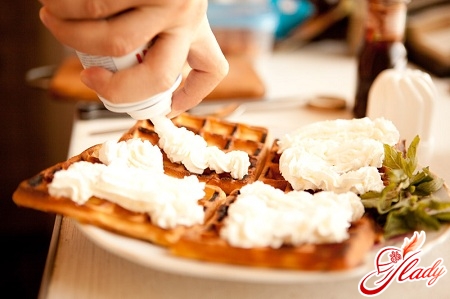 Another recipe for waffles in Belgian. These wafers are hard, and their traditional shape is round or oval. A noteworthy recipe is that these Belgian wafers crumble in granulated sugar before cooking. When baking sugar is caramelized and gives wafers an unusual taste. If you believe the legend, the appearance of this recipe is due to the caprice of Prince Liege. This prince puzzled his court culinary expert, ordering him to bake an unusual bun. Adding sugar to the ready-made dough, the puzzled cook prepared the Prince something he had not tried before. In general, all were satisfied, and as a result received a recipe of Belgian waffles in Llezki. Ingredients:

Preparation: Preheat half the milk and brew yeast in it. Leave them to go for about fifteen minutes, and in the meantime, beat eggs with salt and the remaining milk (as an omelet). Softened butter is spread in a bowl, add sifted flour to it and grind it. Then pour the yeast into this mixture, add the egg-milk mixture and stir with a whisk, a mixer or an ordinary spoon. The dough should be soft and sticky. After this, cover the bowl with the test with a clean towel and leave it to go for half an hour. Finished dough is divided into twelve pieces, each of them is rolled in sugar and baked wafers in Llezki in elektroflavnitsa one or two minutes.

Any recipe, going beyond their homeland,necessarily adapts to the tastes of the inhabitants of the country where it falls. That's what happened with the Belgian waffles. As soon as the recipe for their preparation came to America, where they did not particularly like yeast baked goods, it immediately changed. And in the American version, these wafers are prepared with a baking powder that performs the function of yeast and makes the dough lush. So, the American recipe for Belgian waffles. Ingredients:

Preparation: Separate the eggs into squirrels and yolks. Proteins are cooled, and then beat into a thick foam. Yogurt we rub with sugar, white, we connect them with margarine, vanilla sugar and whisk. Sifted flour is combined with salt and baking powder, pour the milk into it and add the egg-and-oil mixture. Thoroughly knead the dough, and at the end of the preparation add to it mineral water and whipped whites. Gently mix and bake wafers in an electric wafer to a pleasant golden color. Here are such different versions of these amazing waffles. Only Belgian waffles are thick and lush. In the rest of the world, waffles are a thin, dry biscuit with a porous structure and a cellular surface. But waffles in Belgian - this is something special. Try it! Choose a recipe for Belgian wafers and cook - you will not regret it. Just cook with pleasure. Enjoy your appetite and success in the culinary field! We advise you to read:

Homemade sour cream cake is a dessert for everyone to envy!

"Sancho Pancho" cake: recipe for the most delicious dessert

Cake Anthill: classic and with variations