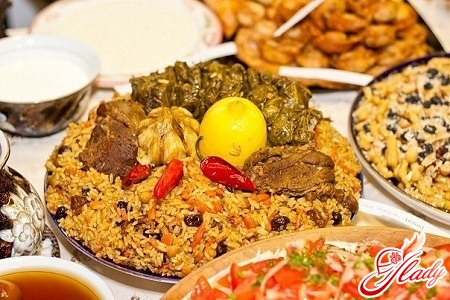 Let's talk about Tajik pilaf today. Pilau (palov, pilav, palovosh) is one of the most revered dishes of the Middle East and Central Asia. The history of this dish is hundreds of years old. For the first time pilon began to prepare the Turkic nomads. Gradually, this dish became popular among Greeks and Arabs. Throughout its history, pilau was honored by the peoples of the East not only for its taste parameters, but also for medicinal properties. It was believed that this particular dish helps to restore strength and strengthen the spirit. Technology and secrets of cooking pilaf, improving, have reached our days. In modern cooking, pilaf is the most favorite dish among Uzbeks, Tajiks and Kazakhs. He takes a decent place in both Azerbaijani and Arabian cuisines. Moreover, every nation has its own nuances of cooking pilaf. Tajik pilaf is similar to Uzbek, but has its own nuances in cooking. Tajik cuisine has more than one recipe for cooking pilaf. This is both a recipe for traditional Tajik pilaf, and a pilaf recipe with meatballs, and a pilaf with chicken, and a plov recipe with fruit, and many others. Depending on the event, pilaf is cooked on weekdays or by the arrival of guests, at a wedding celebration or at a wake, in winter or in the summer, additives can change to the basic composition. In this dish can add raisins, peas chickpeas, quinces, garlic heads. For Tajik pilafs, sometimes rice is soaked before laying in salted warm water to speed up the cooking process. Prepare pilaf is not as difficult as it seems. It is necessary to go through three stages in sequence:

How to recoct oil for pilaf?

Slices of bacon are placed in small cubesKazan, while trying to create the maximum temperature. Fat is heated, and toasted cracklings are taken from the cauldron with a noise. Tajiks have a ritual according to which cracklings must be eaten, otherwise the dish will not work! Oil must be recoated in a metal bowl that has a thick rounded bottom. Enameled dishes are not used. First of all, the dishes are heated, then the oil is poured, overcooking on low heat, trying to avoid the boiling process. Determine the degree of availability of oil on a white haze or a strong crackle. 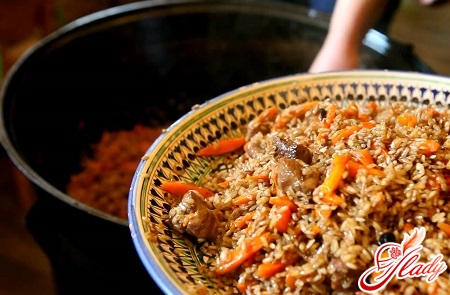 Preparing the dirvak for pilaf

When the oil curing process is completed,Add chopped meat, onion rings, carrots. Carrots in pilaf put half as much as rice, but almost in equal quantities with meat. All ingredients are fried until golden. After 20-30 minutes spices are added to the zirvak. Traditionally, this is a pre-prepared mixture of equal parts of azhgon, red pepper, barberry. At the same time, half a kilo of rice accounts for about 1.5 hours of a spoonful of a mixture of spices. Then zirvak podsalivayut and add water, for 500 grams of rice half a glass.

From above, on the roasted mixture, laid out rice,which can not be confused with zirvak. It is enough to crush it with a spoon or a noise. Then gently water is added in such a way that the rice is covered by about 1.5 cm. If the rice has not been previously soaked, then the water can be taken a little more. Salt is added. To make the rice have a nice golden color, add the saffron tincture. Shortly before the end of the cooking process, pilaf is pierced with a wooden stick in several places, the fire is turned off and allowed to stand under the lid for 20 minutes. This is a general way of cooking pilaf. Let's consider now traditional and popular recipes of the Tajik cuisine. 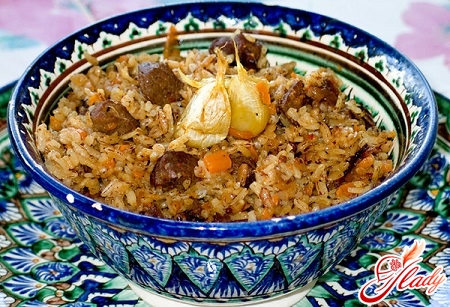 We take 400 g of rice, 80-100 g of vegetable oil,200 g of onions, 400 g of carrots, 4 grams of barberry and zir, salt and pepper to your taste. To prepare forcemeat, you will need: 450 grams of lamb (you can use beef), 120 g onions, 4 boiled eggs, 60 grams of melted fat. Recipe for cooking: Pass meat and onions through a meat grinder. Cooked ground meat pepper, salt. Ready mass to be divided into flat cakes. In them wrapped peeled eggs. Stuff mince, fry until half cooked on fat. Spread the butter and a little cross the onions, diced. After this, add the carrot, chopped with straws, fry with onions, pour water and allow to boil. Then lay the meat, stuffed with eggs, in one layer, add the pepper, salt, barberry, ziru, as well as pre-washed rice, which must be leveled with a noise. When all the liquid is absorbed into the rice, the cauldron is tightly closed and let the plovas be infused. When feeding pilaf it is necessary to lay a slide on a plate, then put up eggs cut into approximately 2-4 pieces in minced meat and sprinkle with sliced ​​greens.

The proportions of products can be changed to your taste. So, take 100 g of vegetable oil, 400 grams of rice, 400 g of carrots, 200 g onions, 4 g of barberry, 4 grams of zir, salt and pepper for taste. To make minced meat, you will need: 450 grams of lamb, 1 raw egg, 120 grams of onions, 50 grams of melted fat, 2 heads of garlic, Recipe for cooking: pre-soaked rice in salted warm water for 2 hours. To prepare zirvak, fry the meat with onion rings and carrots. Minced meat should be prepared in the same way as for pilaf in Dushanbe. Let's add a raw egg. Next, take the grape leaves, first we wash them, and then scalded with boiling water. We make cabbage rolls, wrapping mincemeat in the grape leaves. Obtained cabbage rolls in a ring with a needle and thread (each bluebelt pierced in the center). We load our ring from the stuffed cabbage into the dirvak, add half a cup of boiled water, salt, put the spices. On a small fire continue to stew for 15 minutes. Finally it was the turn of rice. Add it to the dirvak and bring the dish to readiness. The recipe is somewhat laborious, but if we learn how to cook this dish, then we will be able to please people close to us!

How to cook sushi correctly at home and beautiful and tasty

Recipe: a duck in beer for real gourmets