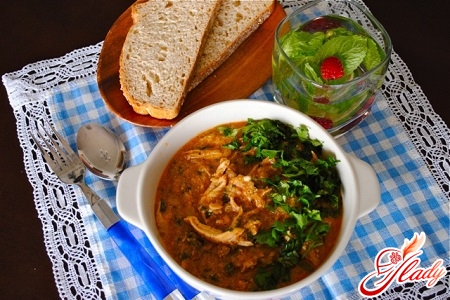 The classic recipe for the famous Georgian soupHarcho provides for the use of beef. In addition, this special dish is due to a special dressing - dried plum puree. But it's not so easy to find it on supermarket shelves. Therefore, as a good substitute will be more traditional tkemali sauce. And some people manage to use freshly squeezed pomegranate juice and at the same time to achieve the desired flavor tones. But Georgian chefs and housewives are very fond of experimenting, so they are strangers to strict prescription frames. Thanks to this freedom and culinary curiosity, there was not one recipe for soup kharcho. Very delicious, this first dish is obtained and in the event that you cook it with chicken. There are also variations using tomatoes and prunes. And each such soup is a kind of small culinary masterpiece. Well, are we ready to create something like this in our own kitchen?

Soup kharcho with chicken and walnuts

It is impossible to resist this first dish. It exudes so delicious aroma that it is not every housewife that can wait for its final readiness, and it takes a minute to take a sample, scooping a little from the saucepan. The recipe for such a soup is not very complicated, and its special feature is the addition of a special component - walnuts. They perfectly blend with the chicken and create a real taste symphony. Do not believe me? Then rather start cooking and make sure how truthful these words are. Ingredients:

Cooking method: Peel onion and cut into medium-sized cubes. Chicken carcass wash, divide into small pieces and put in a pan. Pour water in there, put on fire and bring the broth to a boil. Do not forget to take off periodically appearing on the surface of the foam. When the liquid in the pan becomes completely clear, pour in onions and reduce the heat. Boil the broth for 1 hour. While the basis for your future chicken chicken is slowly being cooked on the stove, get ready to refuel. Tomatoes dip into boiling water, then carefully peel off the skin, and finely chop the flesh. In the pan, pour the vegetable oil, put into it tomatoes and walnuts, mix the two ingredients together and fry for 5-6 minutes, no more. Dill is washed, drained, finely chopped together with garlic and sent to tomatoes and nuts. Stew on small fire for another 5 minutes. Rinse several times under running water and also send to a frying pan to tomatoes and greens. Pour 2 chicken broths there, stir, cover and leave to languish for 10 minutes. After the specified time, pour the contents of the frying pan into a pan with chicken and broth. In a small container, combine the flour with the tomato paste, stir so that there are no lumps, and put it in the soup. Give it a boil, season with salt, season and cook under the lid for at least 5 minutes. Serve this first dish you need hot, sprinkled with cilantro. Although it is considered to be a fairly sharp first course, but it should be flavored with red pepper, since this spice should only emphasize the taste of the soup, and not dominate it, drowning out the rest of the ingredients. The role of red pepper, as well as other condiments, is to create a specific spicy flavor. Cilantro, which is distinguished by a very peculiar smell, must also be used with great care. It is better not to put it in a pot of soup, but serve separately. And yet, do not overdo it with rice, otherwise instead of the chicken from the chicken you risk getting a mess. Carefully read the recipe, and this will save you from most mistakes. 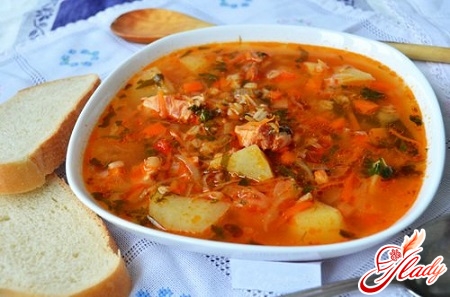 In sunny Georgia it is customary to cook food withusing various condiments and spices. It is thanks to this culinary tradition, which was formed for thousands of years, the national dishes are distinguished by a special rich taste and rich flavor. The chicken soup is not an exception. This recipe allows you to create a real holiday on your dining table, even if there is only one first dish. But what! Ingredients:

Cooking method: This recipe with its number of ingredients is designed for a large family. Do not be scared that most spices and spices do not have a clearly defined measure. Let's learn from the Georgian mistresses and trust our own culinary instinct and intuition. Always try what you cook, and season the dishes as your taste dictates. So, let's go to the soup. To make it, it's better to use a domestic chicken. Divide it into small pieces, fold them into a saucepan, fill with 2.5 liters of cold water and put on medium heat. When the soup boils, carefully remove the foam from its surface and continue cooking until the meat is cooked halfway. Take into account that the liquid should not be strongly boiling, so make the fire weak. When flakes of fat are characteristic for the broth from the home chicken, pour the spoon into another saucepan. Onion peel and finely chop. Pour the pan with the chicken fat removed on the fire and put onion on it. After 10 minutes, put the pieces of chicken out of the broth there, cover and continue to simmer for another quarter of an hour. Then gradually pour the corn flour, and after 5 minutes add the chicken broth. All these ingredients should boil for 15 minutes. It's time to bring your soup kharcho to the desired taste. Add the tkemali sauce. In a separate container, open the walnuts. Mix them with finely chopped garlic, chilli, black and fragrant pepper, cinnamon, cloves, saffron and cilantro seeds. All these ingredients dilute a small amount of cooled broth and pour into the soup. Then add the bay leaves and hops-suneli. To complete the process of cooking this Georgian dish, allow it to simmer on low heat for 10 minutes. Then remove the pan from the plate, but do not rush to flavor its fragrant contents. The present 5-7 minutes of chicken with chicken will be much tastier. Do not forget to sprinkle each serving with a handful of fresh coriander. 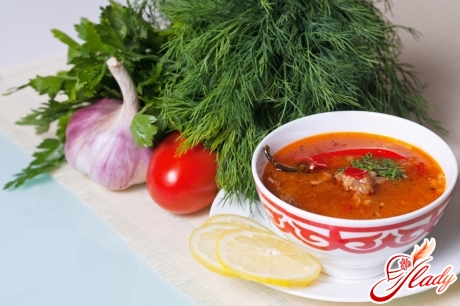 The classic recipe of this Georgian kharchoimplies the use of rice. But there is nothing more interesting than good culinary experiments, is not it? Therefore, try to make soup by following the recommendations below. Its taste will seem to you magical, and the resulting colorful dinner with a Georgian accent will be remembered for a long time by your whole family. Ingredients:

Cooking method: Pour prunes a quarter of a glass of hot water and leave to swell. In the meantime, peel the onions and garlic from the husk and chop as small as possible. With tomatoes you need to peel. To ease this task, lower them for half a minute in boiling water. Cut the remaining pulp into small cubes. Chicken fillet wash, dry with paper towels, salt and pepper on all sides. In a cast iron kettle, pour 3 tablespoons of olive oil, and when it warms up, lay the fillets and fry for 5 minutes. Then reduce the fire to averages and add onion and garlic sliced. Pass it with frequent stirring for 3 minutes. Then take the fillets and set them aside. In the pot, add the diced tomatoes, tomato paste, stir. Then pour in 1.5 liters of hot water, pour out the walnuts and bring everything to a boil. Peeled prunes twice through a meat grinder or turn into a puree with a blender and put in soup. Put the lid on the lid and leave to simmer on low heat for 25 minutes. Fried chicken fillet cut into small pieces and also send to the soup. Continue to cook it for a quarter of an hour. At the same time, engage in millet. In a frying pan, pour 1 tablespoon of olive oil, heat on a fire. Sprinkle millet and fry until the grains are opened. Then take any heat-resistant container, put millet in it, add 2 cups of hot water, cover and cook on low heat for 20 minutes. Shortly before the time set aside for cooking your chicken from the chicken is over, add hops-suneli, as well as lemon and pomegranate juices. Do not forget to salt and season the dish with pepper. Make sure the soup is boiled for 5 minutes, and remove the pan from the fire. While harsh is insisted, take care of the serving. In a deep dish put a little millet, and pour over the kharcho. Each serving sprinkle with finely chopped dill and mint. As you can see, none of the recipe described in the article is particularly complex. To make a delicious soup in Georgian, just do not break the standard technology and clearly follow the order of the bookmark all ingredients. But after all, no one forbids you to experiment and play with different taste tones. Try to supplement some recipe of Georgian hot soup, for example, puree from cherry plum. Perhaps you will discover a completely new and interesting combination.