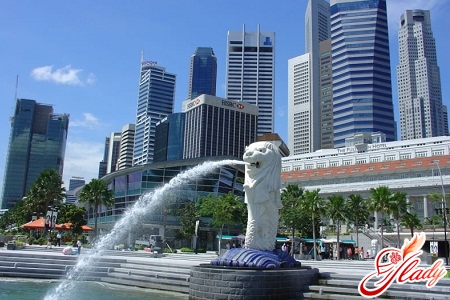 Sometimes it becomes a pity that the journey intime is possible only on the pages of fantastic novels. In man there is an irrepressible thirst to look into tomorrow. Peep at least one eye. And not many people know that such a journey can become a reality. One has only to want, buy a ticket and go to one of the most unusual city-states of Asia. Singapore is located on islands in Southeast Asia, separated from the Malacca Peninsula by a narrow Johor Strait, and occupies a strategic position at the crossroads between Europe, Asia and Australia. Now it is the largest center of communication, trade and tourism. The name Singapore is simultaneously a state, a city, an island and a river. In translation from Sanskrit it means "abode of a lion". When choosing a trip time, it should be borne in mind that Singapore is a country with a tropical monsoon climate, the temperature here constantly keeps at the level of +30 - + 32 ° C. Rains are coming all year round, and from November to February, heavy rains fall on the islands. You can fly to Singapore without a visa for 4 days (visa-free entry of only 96 hours) by direct flight from Moscow in only 10.5 hours. And these will be days filled with brightest impressions. Singapore - its sights, according to the most bold predictions, give a real opportunity to enjoy the achievements of civilization, to which a stiff Europe for another hundred years. Doubt? Let's try to compare. Every European miracle, Singapore can counter with a dozen of its own. You, of course, need facts. Well, buckle up, we're going to the future! 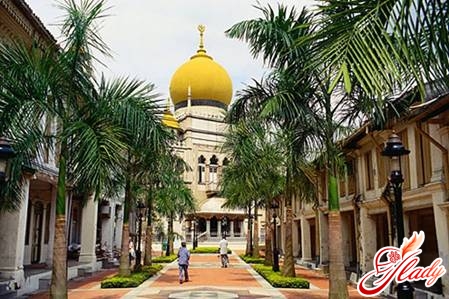 The Chinese quarter is in every self-respectingthe city of Europe and the Americas. Numerous people from this country settled around the globe, creating diasporas. But unlike other countries, Singapore did not limit itself to only the Chinatown, there is an Arab street and its own area of ​​small India. Chinatown is considered the center of Singapore's culture. Despite the fact that most of the quarter was lost in the middle of the 20th century, among the remaining buildings there are those that are examples of the richest heritage of old Chinese architecture. Temples and terraces, old buildings of markets and shops. Just imagine for a moment a whole street, filled with bright little shops, where you can buy everything: from paper napkins to special double-walled teapots for brewing tea. And all this is accompanied by loud cries of traders, the smell of exotic dishes from snack bars, here and there, arranged in the frame of traditional Chinese lanterns. By the way, among them was a Russian restaurant, with such a Russian, on the representation of the Chinese, the name "Shashlyk". Numerous churches complement the already colorful streets. Sri Mariamman is the most picturesque Indian temple, decorated with figures of gods, people and cows. This is the main Hindu shrine of the island. The temples of Wak-Hai-Cheng-Biao, Nagora-Durga-Sreen, Kong Men-San, Siong Lim are known not only and not so much as the sights of Singapore, but also as masterpieces of Asian-scale architecture. In the Indian quarter, you do not leave the feeling that you are in India. Remember the footage from Indian films and imagine yourself, for example, in the center of one of the scenes with songs and dances. The holiday falls on you, instantly involving in your dance. It is worth raising your eyes, and you will see a statue of a seated Buddha and the Temple of a thousand lights; It seems that the candlelight breathes in a single rhythm with you. You may even feel that you have learned the wisdom available only to yogis, have come to your own enlightenment and that if you wish, you will easily ascend to heaven. Sari, colorful as the wings of birds of paradise, colors, shops, elegant jewelry made of gold, stupefying the smell of spices. And all this against the background of sterilely clean sidewalks. This is perhaps the only time that will not let you forget that you are in the center of Singapore, and not in real India. Arab Street will be to the liking of lovers to bargain. A bargain is for what. Products made of silk, batik, cotton. Fine handmade carpets. All that is rich in oriental bazaars, is presented to the eyes of idly strolling tourists. But if you think that the comparative youth of an Arab street does not allow it to have architectural values, you are mistaken. The Hajj-Fatima mosque, miniature and elegant, like a woman of the east, with its falling tower, the main mosque of Masjid Sultan, the golden dome of which can be seen from afar, and of course the palace of Istana Kampong Glam, where the Malay Museum is now located - at a relatively small the treasures of the three ancient civilizations are collected. 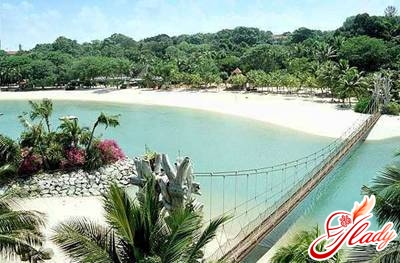 The island of Sentosa is only 500 meters to the southfrom Singapore. In translation from Malay, its name means "tranquility." This is a favorite holiday destination for residents and tourists. Around the island, there are many smaller islands that connect with the main hanging paths. Those who first came to the island of Sentosa, it may feel that all the sights of Singapore are collected on this three-kilometer island. If you look at the island as a whole, it most closely resembles the city of the future. No building is repeated twice. And the numerous attractions and amusement parks are silenced even by the Hong Kong Disney Land. Vulcanolend, which, despite its name, does not tell about volcanoes. In minute detail you can study the history of the origin of our planet, the origin of continents and life itself on earth. And all this is not for the tedious muttering of the guide, but with the help of rides, of which there are a great many. The butterfly park, where more than 300 species of these beautiful creatures live, all kinds of insects, ranging from giant beetles to ants and ending with ants, and more than 7000 exotic birds. A real leap into the future will be visiting the amusement park Universal Studios. His attractions seem to have stepped straight from the famous films created by Universal. Then you and the futuristic megapolis, and guests from all over the universe, and the remains of ancient races and civilizations, and Thrifty Kingdom in full size, and the park of the Jurassic period. The main thing is to have time to see everything. But the sights of Singapore - not only all kinds of attractions and entertainment centers, it is also the animal and plant world of the island. 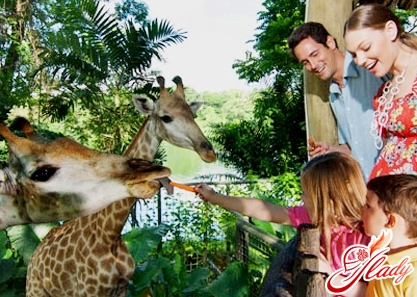 Jungle in the middle of a megacity

What really strikes in Singapore isabundance of orchids. It seems that every free piece of land is planted by these aristocrats of the fauna. You can enjoy the bizarre compositions of orchids in the parks and hotel lobbies. But these are not the only representatives of the jungle that can be seen in Singapore. The Singapore zoo is more like an island carved from the wild than a zoo in our understanding of the word. No cells, animals are in a natural habitat. Lazy look at tourists ostriches, penguins and - that's a miracle! - real white tigers. The Botanical Park of Singapore is difficult to describe in words. There you need to go. It is possible with all responsibility to declare that you will not find such beauty anywhere. Swan Lake, fern valley, palm alley, ginger garden and, of course, orchid garden. The names speak for themselves. And keep in mind that these are not just names: if it is a fern valley, then here are collected all kinds of ferns, what only can be, if a palm avenue, then there is no such kind of palm trees, which here could not be found. Once at an altitude of 200 meters above the ground, on the roof of the hotel complex, it seems that the sights in Singapore have reached the skies, because at this grand height there is a park. A unique creation of Singaporean engineers. More than 200 species of trees from different parts of the world. I can not help remembering the Hanging Gardens of Semiramis. Here, under the open sky, there is a swimming pool. It's time to say that in Singapore to this day is one of the seven wonders of the world. By the way, this is not the only viewing platform with which you can see the whole of Singapore. The Ferris wheel in Singapore is also one of the attractions. Firstly, it is larger than London by 30 meters, and secondly, from the highest point, 165 meters from the ground, in clear weather it is easy to see not only the city of the future spreading below, but also the coast of Indonesia. And between Singapore and Indonesia, neither much nor little - 45 kilometers. Attractions in Singapore are able to surprise, conquer and charm anyone. So many unusual, amazing imagination, that once having visited, I want to return and wander through another amazing island and city. Go back to the future. We advise you to read: