Nuremberg - after Munich, the second largest cityin Bavaria, is at the same time the most important industrial and commercial city in Southern Germany. Here in a modern way the life is hurrying and hurrying, but in order to plunge into a completely different, special atmosphere, all you need is to get to the old part of the city. Starting a walk, you will understand that the sights of old Nuremberg open for tourists a lot of interesting places, known not only in Germany, but all over the world.

In the west of the old city is the PalaceJustice is the attraction of Nuremberg, which went down in history as the venue for the "Nuremberg Trials", lasting almost a year - from November 20, 1945 to October 1, 1946. Here, one can say, was the finale of the greatest tragedy of the 20th century of the Great Patriotic War. In the Palace in the hall number 600 was the court of the former leaders of Hitler's Germany, and behind the Palace there is a house where criminals were kept waiting for the verdict.

One of the most popular attractionsNuremberg is the castle of Kaizburg, which was built by Henry III in 1050. The history of the whole city began from here. It is one of the biggest medieval castles in Germany - a real pride of the locals. Kaisburg is located on top of a rock from a weathered sandstone, surrounded by a five-kilometer wall with 80 towers, the oldest of which is the pentagonal Fuenfeckturm, built in the 11th century. During the Second World War, the castle was badly damaged, but then it was carefully restored, and today visitors are shown the hall and the chapel of the emperor, the knight's hall and the palace fountain. This Nuremberg landmark overlooks the city and offers breathtaking views of the city. 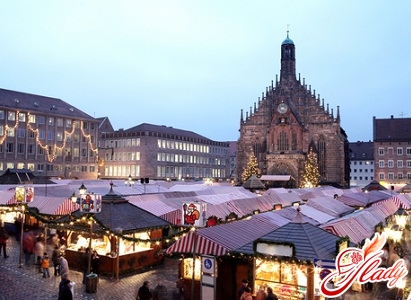 The most famous market square in allGermany is the Market Square in Nuremberg. Every year there is a Christmas market. Today this square is the main decoration of the city, but we must not forget about the tragedy that took place on this place many years ago. In 1349 on the day of St. Nicholas 600 Jews from the ghetto were burnt here. A beautiful fountain with a nineteen-meter column on the Market Square is a landmark of Nuremberg, which is especially popular with tourists. The fountain is decorated with 46 stone figures located on four tiers. Each tier and each figure have a certain value. On the forged fence hangs a gold ring and it is believed that if you take care of it, you will be lucky.

Albrecht Durer - a great recognized artist,engraver, sculptor and jeweler. He was born and lived 57 years in this city. The last years of his life he spent in a house that is now named after him, today there is a museum - another unique attraction of Nuremberg, dedicated to his life, talent and creativity. On the first floor of the museum there is a press, with the help of which Durer made engravings. Also, tourists can admire and appreciate the unique collection of paintings and drawings of this Renaissance titan. In this museum, theater performances, exhibitions and concerts are held periodically.

At the very exit from the metro station LorentzkircheAn unusual fountain, called "The Married Carousel." This is perhaps the most unusual sight of old Nuremberg. Each side of the carousel is a scene that embodies a certain aspect of family life. Fountain sculptor Professor Jürgen Weber said that the creation of this miracle was inspired by the poem "The Bittersweet Wedding Life" by Hans Sachs. In Nuremberg, even from afar, the church is clearly visibleSt. Lorenz, recognized as the largest gothic church building in the whole of Germany. It was built on the remnants of an ancient Roman basilica in 1260. In the church there are two bell towers 80 and 81 meters high. The most amazing thing in this building is the superb stained glass window "rose" with a diameter of nine meters! It is located between two early-Gothic towers. Unfortunately, many interior riches were either lost or sold to pay off city debts. But, nevertheless, even in the Second World War, many church treasures were saved, they were hid in the city cellars. The very building of this unique Nuremberg landmark was then completely destroyed. In 1952, it was restored in its original form. In the choir of the church there are three special masterpieces: the sculpture of Feith Stoss "The Greeting of the Angel", a gilded candelabra and a tabernacle.

In Germany, there are three particularly popular and largetheater projects, and the Nuremberg State Theater - one of them. It involves more than five hundred actors from almost fifty different countries. The history of the theater began in 1905, when the Opera House, recognized as the most beautiful theater building in Germany, was erected. Its silhouette is easy to see in the urban landscape. In 1959 the theater was decided to expand: specially for chamber concerts a new building was built. Then they erected another building, the so-called "Golouba box", designed to hold the premiere of new plays. On September 16, 2003 the theater finally got its modern name and won the right to the title of one of the most interesting sights of Nuremberg. It was on that day between Bayern and Nuremberg that an agreement was signed on the merger of theater companies.

For more than six hundred years, Nuremberg is famous for itstoys, it is sometimes called - the city of toys. Toy figures from burnt clay were made here already in the XIX century. And doll houses and dolls' kitchens, so popular today, were also made for the first time in Nuremberg in the 17th and 18th centuries. The Museum of Toys presents exhibits, from prehistoric times to today's day. They occupy more than a thousand square meters of the total area of ​​the exposition. It is thanks to this Nuremberg landmark that Germany can call this the toy capital. Lydia and Paul Byers began collecting toys in the early twenties of the last century, in fact, on their collection, and the entire museum was founded. Especially for kids on the top floor of the museum is a playground, and at the weekend in the Toy Museum there are presentations of films and shows with new models of toys. 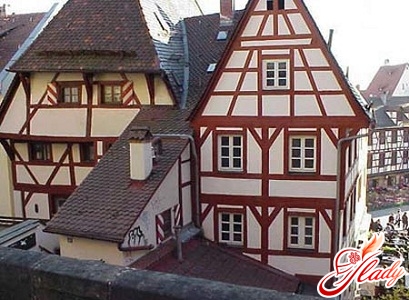 Speaking about the museums of this city, it is impossible not to mentionthe German National Museum, recognized as the largest and most famous museum of the arts, history and culture of all German-speaking countries. You just imagine the scale! More than a million exhibits are kept in the museum, here you can trace the history of Germany from its very inception to our days. Among the exhibits of the German National Museum you can see paintings, sculptures, objects of design, toys, plastic, musical instruments and many, many other interesting and informative. The museum is proud of its unique treasures, primarily sculptures by famous German artists, images of the Kaiser from the Albrecht Dürer already mentioned, an arms exhibition, the famous Globe of Martin Bechaim, and the only collection of historical puppet theaters. This place is one of those that can be proud of Nuremberg - sights dedicated to the whole of Germany, are outside the walls of this museum!

Church of Our Lady

The main temple of Nuremberg is the Church of GodMother, built in 1352 year. It is in front of her every year that the main Christmas celebrations take place not only in Nuremberg itself, but throughout South Germany. Every day on the main market square of the city, exactly at 12 o'clock everyone lifts their heads to look at this church. At this time around the statue of Charles IV, sitting under the clock, seven elegant figures march, this is repeated three times. The spectacle is truly breathtaking. It was this watch and the altar built in the 15th century that glorified the Church of Our Lady of Nuremberg for the whole world. This Nuremberg landmark is undoubtedly worth seeing! Well, here's a walk through the old Nuremberg is coming to an end and you are sure to be hungry. Be sure to visit one of the local cozy restaurants, taste delicious sausages and enjoy a glass of freshly brewed German beer - and you will feel that life is beautiful, because on Earth there are still such wonderful cities as Nuremberg, and its unique attractions bring us a lot of positive emotions! We advise you to read:

Brazil: attractions of the country

Where to take a walk in Moscow?