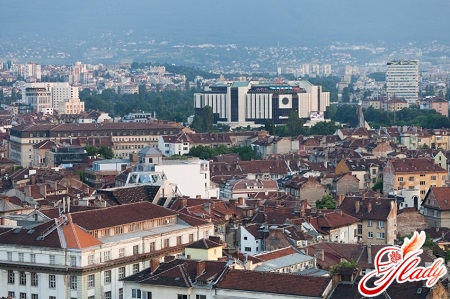 European country Bulgaria is famous for itsBlack Sea resorts, picturesque landscapes, colorful folk traditions and an abundance of historical monuments. Sights of Bulgaria are museums of world importance: Koprivshtitsa, Tryavna, Zheravna, Shiroko-Lika, Melnik, etc., as well as caves, rock monasteries, nature reserves, etc. Bulgaria is famous for its winemaking enterprises producing excellent products, as well as regular exhibitions wines, which made it famous as one of the centers of "wine" tourism. More than 2,000 mineral springs make Bulgaria a health resort of world importance. 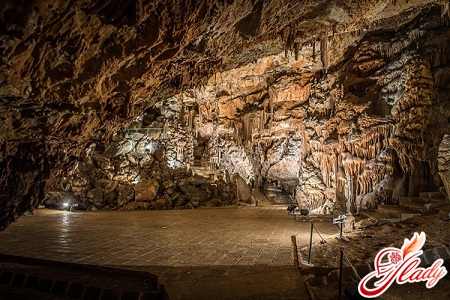 The cave of Syev's hole is one of 9equipped caves in Bulgaria. It was named after one of the twin brothers Seya and Siyu, during the reign of the Ottoman Empire accidentally discovered and hid in it. The cave is located near the village of Brestnitsa, which is 90 km from the capital of Bulgaria, Sofia. The length of 205 m. The ceiling ceiling thickness is 12 m. The largest cave stalactite has a circumference of 60 meters. Under the cave at a depth of 70 meters the river flows. The constant air temperature in the cave is 7-11 degrees Celsius, humidity - 90-98%. The air in the cave is favorable for the prevention of diseases of the respiratory system. In it films are made and weddings are played. The cave consists of 5 halls:

Pirin National Park. It was established in 1962 and was called the Vihren National Park. In 1974, after its expansion, it was renamed the Pirin National Park. Pirin Mountain is the largest national park in Bulgaria. It is a biosphere reserve. The area is 26480 hectares. Over 60% of the area is covered with forests. Baikusheva Mura (muralakan pine) grows in this park - the oldest tree in Bulgaria. His age is over 1200 years. In this reserve there are more than 50 peaks, the height of which is more than 2600 meters, many majestic precipices, beautiful waterfalls and caves, 70 lakes of glacial origin. All this gives the mountain a unique charm. From the mountain Pirin to Sofia 100 km. The Pirin National Park is a UNESCO-protected natural monument. 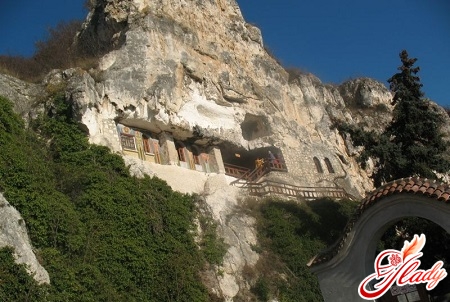 Rock churches near the village of Ivanovo and Razboshky monastery

The complex of rock churches includes churches,chapels and monastic cells, hollowed out in the rocks at an altitude of 6-10 meters on both sides of the Rusenski Lom river in the north-east of Bulgaria. The complex was established in the XIII century, the monks lived in it until the XVII century. Preserved wall paintings (Tyrnov painting) and the inscriptions of those times. The complex is located 4 km from the village of Ivanovo, 460 km from Sofia. These rock churches are the sights of Bulgaria, declared in 1983 a monument under the auspices of UNESCO. Bulgaria adopted Orthodox Christianity during the reign of Tsar Ivan II, but Bulgaria had its own patriarch who did not obey Constantinople. Monk Gioacchino became the first patriarch. He lived in a cave as a hermit at the river Rusenski Lom. Ivan II revered Gioakkino and entrusted him with building a rock monastery. The construction period is 1218-1235. In the time of the Second Bulgarian Kingdom, the monastery was the center of the spiritual life of this region, receiving rich tsarist and boyar gifts. During the conquest of the country by the Ottomans (Turks) in 1396, the monastery was abandoned. Razboshky monastery (Vedvedenie Bogorodichno) is a Bulgarian female operating monastery. Today it is subordinated to the Bulgarian Orthodox Church of the Sofia Diocese. Temple feast - November 2. Accurate information about the foundation has not been preserved, but it is known that the hermit nuns lived in mountain caves already in the Middle Ages, and the monastery church was built in the 14th century. Initially, the church served as a cave in which the hermit prayed to God in complete solitude. Then, at a height of 50 m, a church was built on the platform above the cave, shaped like a ship. In the 18-19 centuries. based rock monastery. There is documentary evidence that the monastery was completely reconstructed in 1841: residential buildings are built on the plain of the right bank of the river by a quadrangular courtyard, and the church of Bogorodchino was left outside the monastery, but continues to be a monastery church today. The monastery is from the village Razboische at a distance of little more than 1 km, from Sofia 79 km to the north-west, near the Nishava river, in the rocks. This monastery is declared a cultural monument. 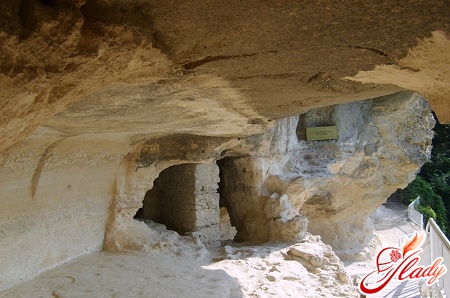 Aladzha monastery - medieval rockymonastic complex. It is located in the forest of Hanchuk, 14 km to the north-east from the city of Varna. It is assumed that the hermit-Christians lived here in the fourth century in specially hollowed out caves. The monastery was founded around the 13th century. It is located in two tiers: monastic cells, rooms and a small church - on the lower tier; the chapel is on the top. The name of the monastery was obtained thanks to frescoes, its name means in translation from Turkish "colorful". The walls of the church and chapel in the XIV century were decorated with paintings, to this day the painting has survived only in the chapel. On the territory of the monastery there is a museum, it contains ancient artifacts found near Varna. 6 km south of the town of Melnik, surrounded by quaint blocks of sandstone, on the mountain, is the Rozhen Monastery. It was built in the 12th century by the ruler of Melnik Glory and is the only monastery restored at the beginning of the Ottoman yoke and preserved to the present day. Its wooden galleries are somewhat gloomy outside, but inside they radiate warmth and tranquility. Vineyards occupy part of the monastery yard. Interesting frescoes of 17-18 centuries. preserved in the monastery church of the Holy Mother of God XII-XIII centuries. Also preserved is the iconostasis, created by unknown masters. 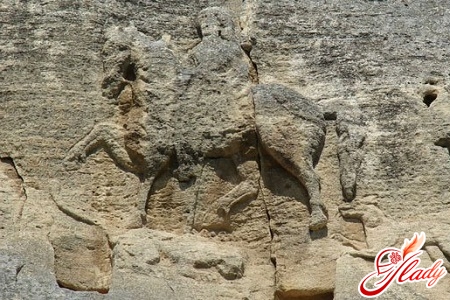 The Madaran rider is the only one in Europea monumental stone relief of the beginning of the VIII century. He was carved on the sheer cliff of Madara plateau at an altitude of 23 meters from the north-western slope. The relief depicts a horseman, pierced by a lion spear, and a dog running after a horse. This triumphal scene symbolizes the power of the Bulgarian state and the greatness of the Bulgarian ruler. Around the relief in Greek, 3 inscriptions are inscribed. In these inscriptions for the first time the word "Bulgarians" is mentioned. The area of ​​Madara was a cult center of different times (ancient and medieval). Here the spiritual life of both Thracians and Bulgarians was concentrated. The rock relief "Madara Horseman" is located 1.5 km from the village of Madara, 380 km east of Sofia. The area of ​​Madara is declared an archaeological and national historical reserve. In 1979, it was declared a UNESCO World Heritage Site. 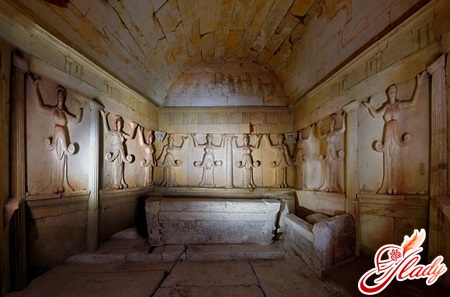 Plakovo monastery is located in the middleStara Planina. It was built during the reign of Tsar Ivan Asen II (XIII century) and was destroyed when Bulgaria fell into slavery to the Ottomans. In 1450 and in the year 1845. it was rebuilt, and then the monastery church was erected. During the Renaissance period, the monastery was an important literary and spiritual center, it contained many early printed books and ancient manuscripts. Plakovo Monastery is a cultural monument, located 18 km from the city of Veliko Tarnovo in a southerly direction. Thracian tomb near the village of Sveshtari. It is a unique monument of the Hellenistic Thracian art of the III century BC. (first half). It is the most significant evidence for the Thracian civilization. Found in 1982 with archaeological excavations of the Thracian mound. In the tomb there are three almost square chambers and a corridor. It is located 470 km from Sofia. In 1986 it was declared a cultural monument under the protection of UNESCO. Sights of Bulgaria, of course, are not limited to this list. It is an interesting country with a rich history and unique landscape. The famous sights of Bulgaria are: Sreburn Nature Reserve, Varna Museums, Kazanlak Thracian tomb, Boyana Church, Gabrovsky (Sakolsky) Monastery, Bachkovo Monastery, Kilifarevsky Monastery, Cape Kaliakra, Stoned Stones (Stone Forest) and many others.

Where to take a walk in Moscow?