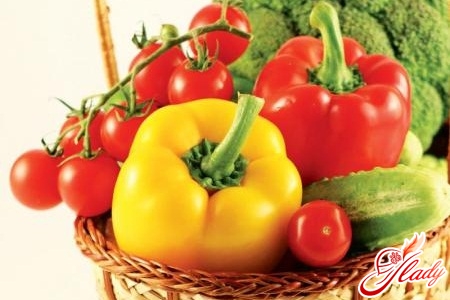 Sweet pepper has a large numbervarieties. The most popular and revered Bulgarian peppers are: orange, red, yellow and green. There is also black pepper, which becomes green when processed. Green pepper is best used in raw form, since if they overstay on fire, it starts to be bitter. Red pepper is used both in cooked and raw form. Orange and yellow peppers are less sweet than red, but are indispensable in the preparation of dishes such as salads, because they have a great appearance. Let's look at the example of several recipes, let's consider what salad with sweet pepper can be cooked:

Cooking method: The preparation time of this salad is 40 minutes. Sweet pepper to clean, rinse. Cut the onions into half rings. In a saucepan pour 1 liter of water, put 1 tbsp. spoon of salt, 5 tbsp. spoons of wine vinegar, several peas of black pepper and a bay leaf. Pepper cut into strips, mix with chopped onion, put in a saucepan and dip into boiling water, stirring constantly for 20 to 30 seconds. After that, the sauté pan with vegetables should be lowered into cold water for a few seconds. Then put the vegetables on the napkins to dry. With tomatoes, peel off the skin, after having doused them with boiling water, and then cut into small slices. Chop the onion finely. All the ingredients are mixed and seasoned with vegetable oil and vinegar sauce. Pepper, salt. Salad with sweet pepper, cheese and greens to put on a dish and sprinkle with green onions. Bon Appetit!

Preparation: Boil rice. Pepper cut into strips. Rice, pepper and peas mix and season with sauce from sugar, vinegar and vegetable oil. Cut the greens finely. Put all the ingredients in a salad bowl, decorate with finely chopped boiled egg and sprinkle with herbs. Bon Appetit!

Method of preparation: Wash vegetables, dry. Slice tomatoes and cucumbers, chop peppers into strips. Greens and onions finely chopped. Mix all the ingredients, salt and pepper. Salad with sweet pepper, cucumbers and herbs, put it in a salad bowl, pour mayonnaise and sprinkle with herbs. Bon Appetit! There are also "warm" recipes for salads with sweet peppers:

Cooking method: Peel potatoes, cut into small slices and boil in salted boiling water until cooked. Peel the potatoes and put them on the napkins. Peppers to clean, wash and cut into strips. Cut the cucumber into slices. Chicken fillet cut and fry in a frying pan in vegetable oil, until a golden crust, pepper, salt. Put all the ingredients in a salad bowl, season with olive oil. Similar recipes for salads with sweet peppers can be prepared with the addition of grilled fish fillets. Bon Appetit!

Cooking method: Peppers, rinse and bake in the oven from all sides, then put in a saucepan, pepper, salt and cover with a towel. After the peppers cool down, peel them from the peel, and then put in a salad bowl. Tomatoes are also baked in the oven, cooled and peeled, finely chopped and added to the peppers. Garlic squeezed through garlic, add to the vegetables. Refill with vegetable oil and sprinkle with finely chopped herbs. Wait for 1.5 hours. Recipes for salads with sweet peppers are very popular, as pepper is not only useful, but also a delicious product. Bon Appetit! We advise you to read:

Salad of squid with cheese - extravaganza of taste

Salad with pasta and ham - the original recipe

Salad with squid and mushrooms: a substantial but low-calorie dish

Salads with butter: recipes are simple, and dishes are not ordinary!