Radish is a useful root crop: Despite the fact that it is rather sharp and peculiar in taste, combined with different ingredients (sausage, vegetables, meat, carrots, juicy apples and other products), it can be very appetizing. In addition, this vegetable contains ascorbic acid, increases the protective forces of organisms, it is even recommended to eat when certain diseases are present: in case of a problem with the liver, bronchial asthma, problems with the gallbladder, residual effects after jaundice. So, if you want to be healthy, train yourself to eat this root crop even in small amounts. As on a winter nose, so the probability to catch a cold or a flu is great. To protect yourself from infection, master several salads with a radish. They are perfectly combined with meat dishes, so that you will not remain hungry. We offer to consider our advice; hope, at least one recipe from the proposed below will be your favorite!

This radish salad is an ideal option forbusy housewives. The time and products needed for its preparation will be at a minimum, and as a result you will get a juicy and light dish. Try it! Ingredients: For salad:

Cooking method: With a knife or special device for cleaning vegetables, remove the peel from the radish, and grind the pulp on an average grater. Cut small tomato slices, and onions - thin rings. For dressing, combine vegetable oil and sour lemon juice. Then in a deep bowl, combine all the ingredients, sprinkle a little on the dish and, if desired, decorate it with fresh parsley or dill. Such a simple recipe will be for everyone, even for those who just get used to the role of cook! Bon Appetit!

The recipe for a salad with a radish is suitable fora warm family dinner on a cold winter evenings. We guarantee that, even after coming from work, after a long hard day of work, you will want to make this dish. Why? The answer to this question is simple - its preparation takes only five minutes. And what else is needed, when the strength is running out, and the stomach asks for food? Ingredients: For salad:

Cooking method: To begin with, clean the root with a knife, and then thin with thin strips on the grater. Green tomatoes cut into four parts, and cucumbers into medium cubes. The recipe for this salad with radish is very simple: combine natural yogurt with sunflower oil and freshly squeezed lemon juice. We did not salt the dish, but you can add this ingredient to your taste. Such a dish will give strength and fill with energy! 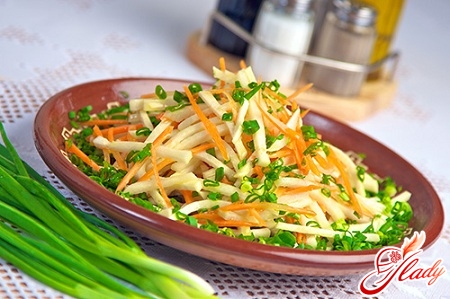 Beetroot salad with prunes and radish

This recipe should always be at hand at eachlady, who not only cares about her health, but also watches the figure. The use of such a salad with radish, beets and prunes, even in large quantities, will not bring you a single extra gram, because this vitamin set is fully absorbed by the body and does not overload it with calories. Therefore, if you are very hungry, it is better to combine it with a meat or chicken dish - so you can sate and not overeat. Ingredients: For salad:

Cooking method: Pre-boil the beet, when it is ready, remove from it peel, just peel and radish. After both ingredients, grate on a grater (preferably a large one). Prunes pre-pour boiling water and leave for fifteen minutes, then drain excess liquid and cut it into small pieces. Mix all the ingredients and add the olive oil, lightly salt. On this, the preparation of the beetroot salad with the radish is finished, however, if desired, you can squeeze a lemon onto the already prepared dish.

We present to your court a recipe for juicy andappetizing salad "Radish plus sausage." Of course, men hardly get to feed such a dish. On that they are a strong half of mankind, in order to eat a lot and nourishing. Give them meat, potatoes, rich borscht and the like. Women, on the contrary, are less finicky in eating and use it in small amounts. Therefore, such a dish in combination with garlic pampushka and juice will make for you a full lunch. Ingredients:

Cooking method: Despite the fact that this recipe includes black radish, you can take any variety. Just peel it off and grind it with a grater. Then cut thin bulbs on the onion bulb, pour the vegetable oil on a hot frying pan and pass until it has a light golden hue. Smoked or other sausage cut into thin strips. Now combine all the ingredients, add the mayonnaise and a pinch of table salt, or better avoid it, stir the dish well. Now the salad "Radish plus sausage" is ready!

Salad with nuts and juicy radish

Pistachios can be consumed not only with beer -There is far more than one recipe in which this ingredient is used. So, having combined them with a radish, adding salt, you will receive a salad that will approach low-fat food in the winter and spring period. Ingredients:

Cooking method: Pre-peeled root crop chop thin strips, and then, in order to remove the taste of bitterness, pour on boiling water, leaving for five to ten minutes, let the water drain. With pistachios, remove a dense skin and crush it with a mortar - you can use a meat grinder for this. Now mix both products and salt a little. To make this salad, vegetable oil is usually not used, but if it seems to you too dry, add one or two spoons. In addition, pistachios can safely replace with almonds or walnuts. The latter is recommended a little fry in a pan without oil - so the dish will get much more appetizing!

Curd salad with nuts and radish

The composition of this salad: radish, low-fat cottage cheese, nuts and sour cream for refueling. It's unlikely you've tried such a dish. Are we not right? Then why not take this recipe for a note, suddenly come in handy! Ingredients:

Cooking method: Radish choose to your taste (you can take a green or black). Remove it from the peel and grate it in small strips. Then combine the sour cream and the grainy cottage cheese. As for walnuts, it will be tastier if you fry them in a heated frying pan (without using oil) for two to five minutes. After that, combine in one container all the ingredients, a little sauce and salt. Serve for any dish. 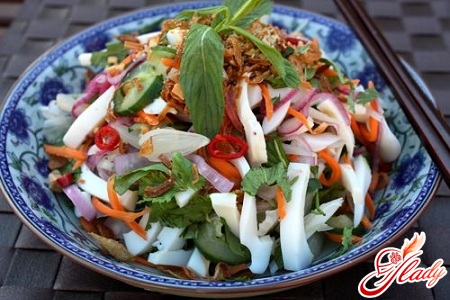 Usually, the phrase "Jewish salad" means a dish of grated cheese with mayonnaise and garlic. And we have prepared for you another recipe similar to the name of the dish! Ingredients:

Cooking method: Peeled radish grate straw on the grater: if you want to muffle it a little, sharpen the root with steep boiling water and wait for the liquid to drain. To make cracklings, remove the chicken skin and fat from the chicken, then cut into two-centimeter strips, which are placed on a cold frying pan (without oil) and pour water. Cook on low heat until it completely evaporates, at the end, when the cracklings become honey-golden, lightly salt them. The remainders of fat are used for cooking onions. However, if your body does not tolerate heavy food, fry the bulb on vegetable oil. Now combine all the ingredients in one bowl, sprinkle with black pepper if desired and quickly begin the meal.

Salad of mushrooms and radishes

To prepare this dish we usedcanned mushrooms, but with the same success you can take fresh mushrooms and fry them in olive oil. The main thing - do not be afraid to experiment! Ingredients:

Cooking method: Peel one medium-sized radish from the peel, then grate it with strips on the grater. This recipe says: "Fill the root with cold water and leave for ten to fifteen minutes." Although some sources suggest that the vegetable is covered with boiling water. To choose the best option for you, it is better to try both methods. After water manipulation, fry the radish in a frying pan with olive oil. Pickled champignons cut into small pieces, and the onion - half rings. Then combine all the above products, add the salt to your taste and, if desired, black pepper. We hope you will like the dish! These salads - not the whole range of dishes that can be made from radish. If you like this vegetable, follow our publications and you are guaranteed to find your "own" recipe. We advise you to read:

Fruit salad: the most popular recipes with fruits

Salad with ham and tomatoes

Salad with mango and shrimp - exquisite luxury of taste

Salad with shrimps and Peking cabbage: a recipe for every day