A delightful scent spreads throughouthome. For some reason, it's rye bread that smells especially tasty during baking. Domestic people are impatient: Well, when? But they will have to wait a little longer - the preparation of bread does not tolerate fuss. Today, more and more people are mastering bread baking, preferring a homemade product made by themselves, shop. However, with rye bread the situation is not as simple as with wheat bread ...

Bread is a very ancient product that absorbed itselfcenturies-old experience of our ancestors. The first information about the recipes and traditions of cooking bread in Russia archaeologists found in the annals of the XI century. Baking recipes were handed down from generation to generation, and the status of the hostess was determined by her ability to bake bread - not without reason in the fairy tale "The Frog Princess" that was the first test for the daughter-in-law. The ancient Slavs baked bread rye. For its preparation rye flour, leaven from the same flour and water were used. The leaven is needed to raise the dough to give the finished bread a splendor and softness. Because it was sour, "fermented", then the bread turned sourish taste. Leaven is a more liquid dough that has undergone fermentation. It was prepared for several days, partially used, and the remainder was preserved for future baking. They could also leave part of the test itself, which the next time managed to wander. Bread from rye flour has received one more name - "black". In some ancient Russian regions the word "bread" was called rye bread, and all pastry from wheat flour had other names: loaf, loaf, carrot, roll, etc. Rye bread was traditionally considered the food of the poor class - the rich preferred wheat bakery products. Recipes for baking rye bread were invented and perfected over many centuries. In 1626, the royal decree On Bread and Fruit Weight was published, in which 26 varieties of rye bread were spoken. Many of these recipes have survived to this day. But it should be noted that not so long ago our domestic bakeries stopped producing traditional 100% rye bread. All types of bread, called "rye" or "black", are actually rye-wheat bakery products, with the addition of other types of flour and various ingredients (malt, nuts and seeds, dried fruits, fragrant herbs and spices, honey, kvass and t .). The most famous varieties include "Borodino", "Riga", "Moscow", "Ukrainian", "Darnitsky", "Rural" and others. 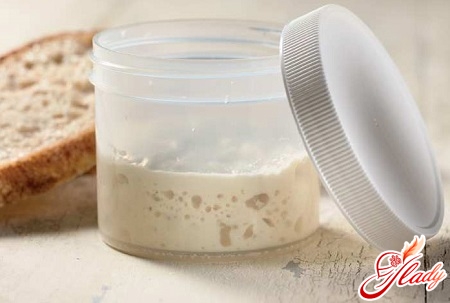 For lifting and loosening of rye doughtraditionally used either leaven, or baker's yeast. The recipes for preparing starter cultures have a rich history - the first information about them reached us from ancient Egypt. The legend of the origin of the leaven is very banal: the ancient baker forgot for a while about the dough, and it managed to wander and rise, which gave the product when baking fluffiness and volume.

And yeast, and a dry leaven can be bought today instore. But many housewives prefer to grow and support the leaven themselves. To make it (in the simplest version) you need to take rye flour and water in equal amounts, for example, 1 glass, stir well, place in a glass jar and cover with a clean cloth. Categorically it is impossible to cover the jar with a lid or polyethylene - a leaven of fresh air is necessary! It should be borne in mind that the leaven is greatly increased in volume, so the container should be quite capacious. The bank needs to be put in a warm place for two days; during this time the process of fermentation begins, on the surface of the starter will begin to form bubbles, a characteristic sour (but not musty!) smell will appear. The leaven is prepared for four days. After the first two days it should be fed: add the same amount of a mixture of rye flour and water, mix thoroughly and leave for another day to ripen. After three days, the leaven is fed for the last time, and after one day of fermentation it is ready for use. A part of the ferment, about 100 g, must be put in a clean jar, covered with a lid and placed in a refrigerator. The day before the next bread preparation, the ferment should be extracted from the refrigerator and fed up again with rye flour mixed with water in equal quantities. So you can support the growth of leaven for a long time. The appearance of an unpleasant sharp smell indicates that the leaven has deteriorated. 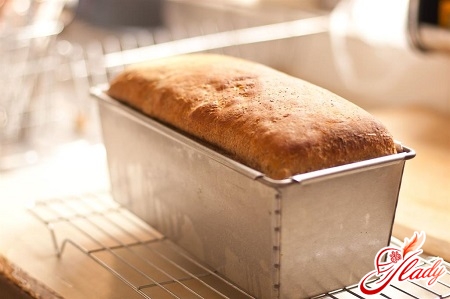 As for yeast, recently there has been amany disputes about their usefulness. Some very authoritative scientists say that dry baker's yeast can harm the human body, because they promote the growth of cancer cells, and also negatively affect the work of the brain, intestines, and weaken the immune system. In their opinion, bread on leaven is more useful and nutritious. In any case, each landlady herself decides what to use: yeast or leaven.

At home, there are two main waysbaking bread: in the oven and in the bread maker. It is worth noting that not all bread makers have the function of baking rye bread. Rye flour is heavier when kneaded, and in order for the breadmaker engine not to burn out, in some models there is a special spatula for making a rye dough. Household appliances greatly facilitates the process of baking bread: the form is laid down products in accordance with the recipe, the program is installed from the list of offered or your own - and you can relax: the signal will announce that the bread is ready! It's another thing to make rye bread in the oven. Here you can distinguish several stages: growing the yeast (if yeast is not used), kneading the dough, standing, molding, proofing and baking. 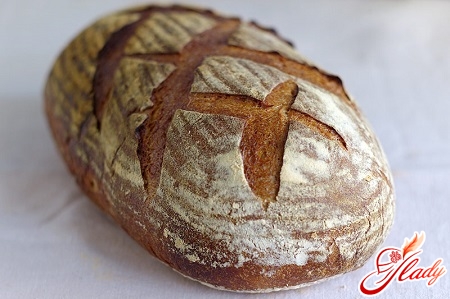 There are a lot of recipes for rye bread. What is not added to the dough to give the product a special taste and aroma! And here - space for imagination and a wide field for experiments. But first you need to master simple, "classic" recipes for baking rye bread. The recipe for a simple one hundred percent bread made from rye flour in a starter baked in the oven Sift 400 g of rye flour, add 400 g of rye starter, 2 tsp of salt, 2 tbsp. spoons of honey or sugar, 2 tbsp. tablespoons vegetable oil. Knead the dough, pouring in gradually 140 ml of water. It should be noted that the rye dough is very sticky, but it is not recommended to add extra flour - it is better to wet hands and dishes with cold water when kneading and molding. The mixed rye dough should be sprinkled with flour, cover the dishes with a towel and clean in the refrigerator for at least 10 hours, and preferably for a day. During such a long proofing, the test will ferment. Next, put the dough in a baking dish, greased with vegetable oil, and leave it now in a warm place for 3 hours to rise: the dough should increase in volume by 2-3 times. Put in an oven heated to 250 degrees, bake for 10 minutes, then reduce the temperature to 200 degrees and bake another 30-40 minutes. Willingness to check with a wooden stick: if it is dry, then the bread is ready. The bread taken from the form should stand for 30 minutes, covered with a towel. The recipe for simple rye bread on yeast baked in the oven In a separate bowl you need to mix 1 tbsp. spoonful of dry yeast, 1½ tbsp. spoons of sugar and 1½ cups of warm water; put in a warm place for 20 minutes for fermentation. At the end of this time, add 1½ st. spoon vegetable oil and mix. In another dish, sift through 1½ cups of rye and wheat flour, add 1 teaspoon of salt, yeast with butter and mix well. Then, the container with the test should be covered with a towel and left in the warmth for 3-4 hours for lifting. After that, the dough is kneaded and put in a baking dish, pre-greased with vegetable oil. Cover again and leave for 20 minutes to proof. Preheat the oven to 200 degrees, place the mold on an intermediate level and bake for 30-40 minutes. Get ready rye bread from the oven, wrap it with a towel and let it stand for another 20 minutes. The recipe for boiled rye bread on yeast baked in a breadmaker To bake such bread, you must first brew 4 tablespoons (40 grams) of rye fermented malt in 80 g of boiling water, cool. Fill in the breadmaker's form ingredients in the following order: 2 tsp dry yeast, 300 g rye and 250 g wheat flour, 2 tbsp. spoons of honey or sugar, 1½ teaspoons of salt, 1 teaspoon of coriander seeds or cumin, 2 tbsp. tablespoons vegetable oil. Pour over the brewed malt and 330 ml of cold water. Place the form in the bread maker and install the desired program. The cooking time is approximately 3½ hours. Baked bread is also kept under a towel.

A few words about the benefits of rye bread

Rye or "black" bread has always been considered in Russiathe main food due to good yield and low cost of rye. In addition, rye flour is a storehouse of nutrients, vitamins and minerals. Our ancestors could only eat rye bread and water for a long time, and daily perform heavy physical work. Regular consumption of rye bread promotes good bowel function, cleanses the body of toxins, reduces the risk of serious diseases such as diabetes and cancer. However, this product is contraindicated for people with stomach diseases on the background of increased acidity and with peptic ulcer.

Use in folk medicine

Rye bread is also used in folk medicine and cosmetology. Here are some recipes:

In conclusion, it remains to say: rye bread is undoubtedly a useful and necessary product. Of course, the process of its manufacture is laborious and troublesome, but the taste, aroma and usefulness of rye bread will more than pay for the effort and will bring a lot of pleasure to you and your loved ones!

How to cook a delicious pizza?

Pizza in the microwave: a traditional Italian flat cake in a modern oven

The recipe for delicious pizza: the secrets of the most popular dish