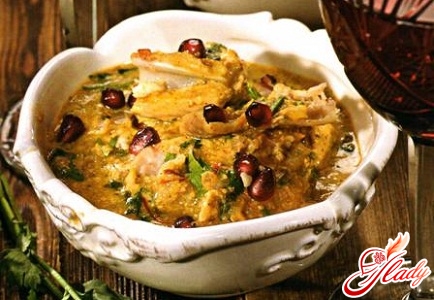 Satsivi is a Georgian sauce based on Greeknuts. Satsivi is also called the second dish, which is cooked mainly from chicken. However, under turkey sauce, turkey, goose, duck, and even fish can be served. Do not think that the dish is very difficult to prepare. It's enough just to devote a little time to further please yourself and your family with a delicious lunch. So, shall we begin?

Cooking method: Preparation of satsivi from chicken begins with the fact that the chicken should be washed under cold water, put into a saucepan and boiled in salted water. Baking tray grease with vegetable oil and lay on it boiled chicken and bake in oven to a beautiful ruddy crust, and then cut into small pieces and put into a pan. Chicken broth strain. Garlic crushed with garlic. Onion finely chopped. Grind the cloves. In a frying pan, with the addition of vegetable oil, fry onions. Cut the walnuts. Add garlic, cinnamon, pepper, salt, crushed cloves to them, and then fried onions. After the homogeneous mass is obtained, gradually pour in the chicken broth. As a result, you should get a sauce, which, in consistence, will resemble sour cream. Then sauce put on a slow fire and gradually stirring bring to a boil and add pomegranate juice. The resulting sauce put in a pan with chicken and mix thoroughly. Put the pan in the refrigerator for several hours. Satsivi recipe from chicken, is very popular all over the world and therefore, undoubtedly, will become one of the crown dishes on your table. Bon Appetit!

Cooking method: Carcase the turkey carcass, put it in a saucepan and boil it in salted water. The pan should be greased with vegetable oil and put on it boiled turkey and bake in oven to a beautiful ruddy crust, and then cut into small pieces and put into a pan. Broth the broth. Garlic, nuts and greens chop. Add cinnamon, cloves, saffron, hops-suneli, pepper and vinegar, and then dilute the resulting mass with broth. In a frying pan with the addition of butter, fry the crushed onion, and then add it to the nut sauce. To stir thoroughly. Sauce put into a saucepan and bring to a boil, then put turkey in it. Satsivi from turkey - ready! Bon Appetit!

How to prepare satsivi from fish? To do this, the fish should be washed, rolled in flour and fried in a frying pan with the addition of vegetable oil. Onion finely chopped and fried in a frying pan in butter, there also add the garlic flavored garlic. Nuts chop and add to onions. Then add sauce, seasoning, vinegar, 3 egg yolks, chopped greens and pour the whole mixture with meat broth. Pepper, salt to taste. Put the fish in sauce and simmer for 15 minutes over low heat. Bon Appetit!

How to cook pork goulash