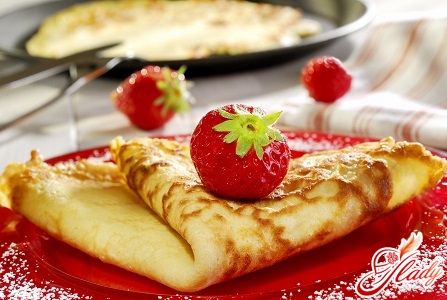 Before you start cooking, you will be interestedfind out where the recipe for such a delicious and beloved dish, like pancakes, appeared. In order to answer this simple and innocent question, we will have to return mentally to ancient times.

How did the pancakes come about?

The recipe for pancakes first appeared in ancient Greece. Since the 6th century BC. e., pancakes were an important part of the breakfast of any Greek. The first written mention of pancakes comes from the poet Kratina, who described them as warm and lush in one of his works. In Greece, pancakes are called tiganytys (from "taginites"). The French have their own name for pancakes - crepes (from "crepes"). These are very thin pancakes, which are stuffed very simply: eggs with cheese, spinach or fish. They can be eaten not only for breakfast, but for lunch and dinner. Kaiserschmarrn (from the German "Kaiserschmarrn") is a popular pancake dish that originated in Austria-Hungary. The first Kaiserscharrarn was prepared for the Austrian Emperor Franz Josef I. The recipe for the pancake contains a secret: berries, nuts and raisins are put in the dough. This pancake is usually eaten for dessert; served with an apple or plum jam. In Russia, the history of the appearance of the recipe for pancakes can be linked to the Shrovetide (the Shrovetide week is celebrated in the last week before the Great Lent). Pagans tied this week with the end of winter and the arrival of spring and for a week, as a rule, nothing was eaten except pancakes. The pancake itself, round and golden, symbolizes the sun. Tradition says that if a woman cooks a lot of delicious pancakes in the spring, in the summer it will bring a rich harvest, health and success. Pancakes traditionally accompanied a person from birth to his last day - a woman who had just given birth to a child was given a pancake, which was supposed to bring good luck to a newborn, and when a person was dying, pancakes were an urgent necessity at a funeral feast. Pancakes are eaten with a variety of fillings that you can imagine: mushrooms, meat, berries, sour cream, onions and potatoes, fish, honey, condensed milk, jam, caviar, cheese. And someone eats pancakes just like that, without stuffing. 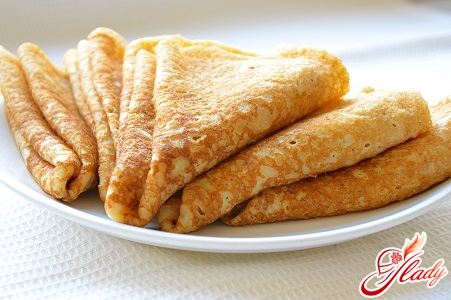 The recipe and process of cooking pancakes in the past waslong and mysterious. First, a good housewife did for the beginning the spoon from warm water, yeast and flour. The very place where the dough was cooked was of great importance - the women went to the lake or to the edge of the forest. The very first pancakes, which were prepared, were put on the windowsill - for the poor. The frying pan on which the pancakes were cooked was cast iron and without a handle. Such frying pans were used exclusively for the preparation of pancakes; no other dish could be cooked on it. Pancakes did not burn in such frying pans, but they turned them over, throwing them into the air. In ancient Russia, even special races were held, where people had to escape and at the same time turn the pancake on the fly. Currently, pancakes are not only one of the fastest, tasty and varied dishes (due to a large variety of fillings). Many Russian writers, including Chekhov, Pushkin and Gogol, dedicated pages and even stories to pancakes. They also appear in many verses, songs and proverbs. Over the last thousand years, much has changed in the recipe for pancakes. But one thing remains unchanged - these small, tasty symbols of the sun are still loved and eaten all over the world.

The recipe for classic pancakes

You can use this classic dough recipe to create a base for sweet or salty pancakes. Ingredients: 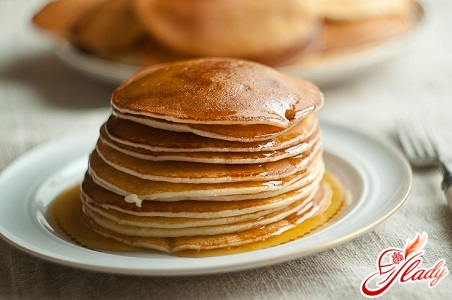 The recipe for lush classic pancakes

How to bake the best pancakes?

To turn a normal pancake into a special one,only a new filling is required. So leave aside the usual fillings and supplements and try something new: canned fruit, whipped cream, chocolate syrup, caramel, peanut butter, ice cream, cream cheese (do not forget about flavored varieties!), Curd mixture.

How to cook a charlotte in a microwave oven: a recipe for a delicious pie