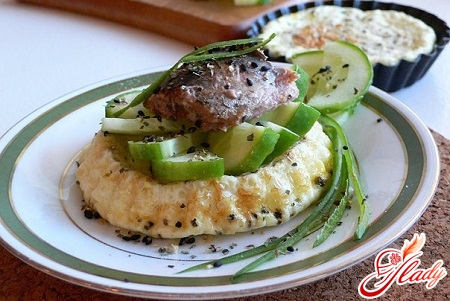 Interesting facts about omelet: it is not exactly known where and when a dish under this name appeared. There is a legend telling how the Roman Emperor, getting lost while hunting, was hungry. The road led him to the house of a poor man, who, without being embarrassed, treated the important guest to what was in his house. Chicken eggs stirred in a bowl, added milk and baked in the oven. The Emperor really liked this dish, and he ordered the court cooks to cook it in the palace. Over time, cooking masters improved this recipe by adding new components to it. Soon in the whole Europe, the omelet became very popular, especially in France and Italy. He is also well known in Asia, the Japanese supplement it with rice. Omelette, consisting of some proteins, is a bit unusual for all dishes, but at the same time very tasty. But protein omelette is highly respected by nutritionists. It is characterized by a low content of fats and carbohydrates, and proteins, on the contrary, it gives in excess. This dish will suit both adults and children, and in general all those who are contraindicated in eating whole eggs, both fried and hard-boiled. Such an omelette can be prepared in an oven, in a frying pan, in a double boiler. Even if you do not have the last one at home, we will tell you how to make a steam omelet without it at home.

Agree, sometimes there is such a situation,when after cooking a dish you have proteins left. For example, after baking. What to cook from them? Nothing else comes to mind, except gogol-mogolya or meringue. We will tell you a fresh idea: why do not you cook a wonderful, light, melting egg white omelette? Ingredients:

Cooking method: Whip the whites in a persistent foam. Then gradually, in several portions, pour in the milk, salt, sprinkle with spices. Greens, better dill, finely chop with a knife and add to the omelet dough. Mix everything thoroughly. In a frying pan, melt a piece of butter, and then pour the protein mixture here. This omelette is fried for about three minutes on one side and the same for the second one. It is better to cover the frying pan with a lid, so the proteins turn out to be more magnificent. When the omelet becomes rosy, place it on a plate, divide into portions and serve to the table. Sour cream, mayonnaise or some cream sauce will suit it.

Sweet omelet from egg whites in the oven

We recommend you pay attention to this recipe - itwill be a real godsend for mothers who care about feeding their children and wanting to make their breakfasts tasty, nutritious and varied. It's hard to believe, but an omelette can be sweet. The recipe is also useful to people who care about health, or those who lose weight on a protein diet. Omelette can be cooked in the oven with a minimum amount of oil, and then there will be no fat in it. Ingredients:

Cooking method: To a dense state, whisk the squirrel with egg whites. To them add sugar and half a glass of fruit or berry jam. Since the omelette will be small and designed for two people, take a small form for baking. Cover it with oil, transfer into it a lot of jam and protein and send it to the oven. The standard temperature is 1800 C, the time in the oven is 20-25 minutes. After cooking, remove the pan, divide the omelet into pieces, sprinkle abundantly with powdered sugar. Serve this dish with sweet sour cream, yogurt, vanilla sauce or hot milk. 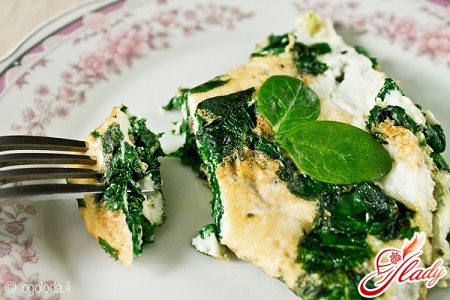 Protein Omelette with Vegetables and Cheese

Omelette, cooked in the oven, and justfried in a frying pan, as usual - this, as they say, two different dishes. And the difference between them is very significant. If you've never cooked an omelet in the oven, be sure to try this recipe. We assure you that in the future you will often make a dish in this way. Ingredients:

Cooking method: Whip the whites with a fork or a mixer. When the mass is significantly increased in volume and thickens - add a little milk, enter gently flour, salt, add spices. Put the protein dough on a baking tray covered with paper and put the baking in the oven for 15 minutes at 180 ° C. The recipe for this omelet includes vegetables, so now is the time to prepare them. So, cut the cherry tomatoes with halves, and the sweet pepper - with strips, not forgetting to peel the seeds and the tail. Finely chop the greens with a knife. When the omelette is ready and evenly baked, remove it, on one side lay out the filling of vegetables and greens, cover the other side - as in a sandwich. Sprinkle with grated cheese on top and keep in the oven for about 5 minutes until the cheese begins to melt. Cut this envelope into several serving pieces and serve it on a table on plates laid out with lettuce leaves, decorating with branches of greenery. This omelet, cooked in the oven, will go well with tomato or vegetable juice. 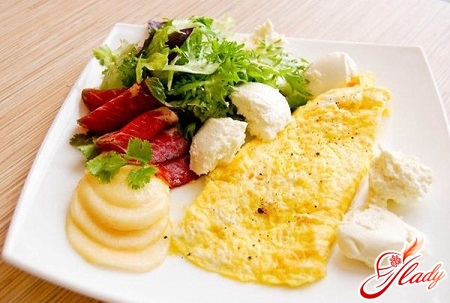 If you are faced with a situation where it is necessarysparing diet, then one of the most desired dishes for you will be an omelet made from proteins, cooked for a couple. To use it is best with buckwheat porridge in water without oil - then you get a portion of amino acids that a person needs for eating. The recipe for this omelet is useful to those people who are forced to limit themselves in nutrition. It can be cooked in a double boiler, or you can make a steam bath in a saucepan and steam it. Ingredients:

Cooking method: To the state of strong foam, whisk the squirrels with a whisk, add water, salt. Apply a small glass or ceramic form with oil and leave to cook in a steamer for no more than 15 minutes. Protein mass should thicken. If the shape is deep, the omelet must be stirred periodically. At the end of the allotted time for the hot dish, put a small cube of butter, which will instantly melt and give your omelette a special tenderness and creamy aroma. In parallel, right there, in a double boiler, prepare a marrow for a couple: just cut it and fold it into a container. Serve with an omelette.

Omelet without yolks with corn

The perfect solution for breakfast or lunch is an omelet ina double boiler. A simple dish of eggs is always useful and very tasty. However, not all people can eat yolks, because they have high caloric content and contain a lot of cholesterol. Also sometimes there is an allergy to yolks. But there is always a way to stick to a diet and at the same time not to part with your favorite dish. We suggest you make a steam omelet. And if more specifically, we present for your consideration an interesting recipe for protein omelet with corn. Ingredients:

Cooking method: The recipe for this dish is designed specifically to create a culinary masterpiece in a double boiler. Therefore, in advance, find a shape suitable for cooking in your steamer, grease it with butter. In a separate bowl, lightly beat the eggs when the mass increases in volume and thickens, add milk, salt and gently enter a tablespoon of flour. Pour into a prepared steam mold. Open the jar of corn, put it in a colander, to drain excess liquid. Then put in the same form, where the omelet mass is already waiting. Send your future masterpiece and in 25 minutes in a steamer everything will be ready. When you get it, do not forget to decorate it with chopped greens. Omelette, cooked in any way - in a frying pan, in the oven or a couple - is one of the most successful options for breakfast or lunch. It can also be used as a full meal for any diet, especially if it has strict limitations. Although this dish is low-calorie and contains few fats, it is quite dense, bears an energy boost and gives satiety for the whole day.

Shrimps in creamy garlic sauce: we prepare dishes with seafood