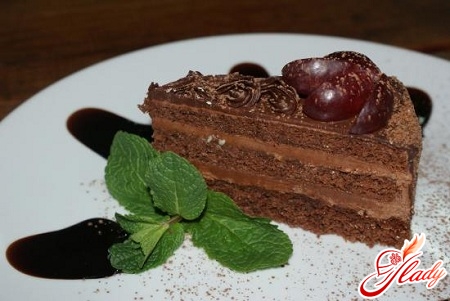 Have you ever wondered why we love so much?Dessert? That's right, because it's delicious. In addition, they harmoniously complete any meal, and most importantly - it has long been proven that sweet dishes give people a hormone of joy and good mood. But this is something that we so often lack in life. We also want to add a little bit of joy and offer to cook the famous Prague cake, which is certainly a favorite treat for many of our readers. The recipe for Prague cake (to be more precise, the recipes, as there are quite a few variants on this confectionery masterpiece) is not very simple, but, in principle, it can be baked at home. We, as always, offer a few recipes, and you, after trying everything, choose the one that seems to you the most delicious. Before offering you the first recipe, let's say a few words about the history of the appearance of Prague cake. The name of the dessert speaks for itself - this cake was presented to us by Prague, a beautiful European city, the capital of the Czech Republic, famous for its sights, magnificent architecture, beer and, of course, national cuisine. The Czech Republic was once part of the Austro-Hungarian Empire. Austria is known as a kind of confectionery paradise: many cafes and in each its "sweet" menu, its secrets. Sweetheads probably heard (and many have tried) the famous Austrian cake Sacher, whose recipe is known for sure only to the confectioners of the famous Viennese cafe with the same name, where, in fact, it was invented. So Prague cake is a kind of variation on the theme of Sacher cake, although they, of course, have a lot of differences. But chocolate biscuit, fudge and jam layer, undoubtedly, combine these two confectionery products. It can be said that the Prague masters of sweet affairs enriched the palette of tastes: an authentic recipe for Prague suggests several types of cream, mandatory impregnation of the cake with liqueurs, in short, they have a lot of their secrets. As for the Prague cake baked in our country, his recipe was invented by the confectioner of the Moscow restaurant "Prague". The master class from Czech colleagues became a definite impetus, which included the creative imagination of Vladimir Guralnik. As a result, we got a wonderful cake that is loved and able to cook in many families. I must say that the classic recipe of Prague cake and the technology of its preparation are, of course, the lot of professional confectioners. But at the same time, there are a number of adapted versions of the classic recipe, which, however, allow you to prepare an excellent product that is distinguished by its exquisite taste and good appearance. 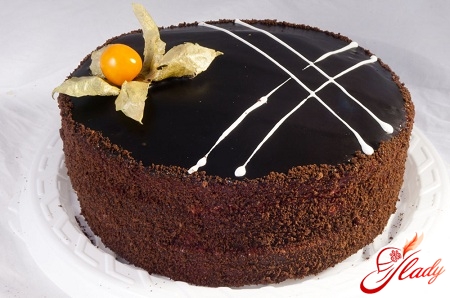 Cooking method: The recipe for the test for the yolks is separated from the proteins. Sugar is divided in half. Beat yolks and a half of sugar in such a way that they turn into a lush, homogeneous mass. Cool the beaten whites into a foam, add gradually the remaining sugar and continue to whisk all together until soft peaks form. Gently mix the whites and yolks. Pour in the resulting mixture of flour mixed with cocoa, and gently mix everything. Add the melted butter and mix again gently. Pour the dough into a baking dish, oiled and sprinkled with flour. Bake at 180 degrees until cooked (about 40 minutes). Slightly cool and remove from the mold. Leave the finished cake for a few hours to "rest." After that, cut into three layers. The recipe for the egg yolk is mixed with water and beat. Add cocoa and condensed milk to the mixture in small portions and whisk again. Put in a water bath and cook until thick. While the cream is cooling, beat the softened butter with vanilla sugar into a lush mass. Add the boiled cream (in small portions) to this mixture and beat again. Recipe for glaze It is prepared immediately before picking the cake. Chocolate to break into pieces, melt it and oil in a microwave oven or in a water bath, mix to make a perfectly homogeneous mass. We're collecting the cake. Each layer is smeared with a cream. The upper cake is covered with thick jam, confiture or jam and is poured with sweet (boka too). The cake should stand in the refrigerator for several hours.

Ingredients for impregnation of cakes: cognac (brandy), and it is best to use a liqueur that is combined with the jam used to smear the upper cake. Method of preparation: Recipe for cakes Eggs are rubbed with sugar, add sour cream and condensed milk. All carefully mix to get a homogeneous mass. In sifted flour add salt, cocoa and baking powder and mix in small portions with the egg-sour mixture. As a result, we get a dough, in consistence resembling sour cream of medium density. Pour the dough into a suitable baking dish, oiled and sprinkled with dried crumbs. The cake is baked in an oven, heated to 180-190 degrees, about an hour. We cut the finished cake after cooling down into 3 parts. We impregnate each part with liqueur. Note. It is important not to overdo it, so that the cakes do not become a mess. To give the cake an exquisite taste, it is enough to lightly sprinkle the surface of the cake. A way of preparation of a custard Now we start to prepare a cream. We beat the egg and gradually add milk to it. In the sifted flour mixed with cocoa, in small portions we add the egg-milk mixture. The blank for the cream should be absolutely homogeneous and without lumps. If you are not sure of the ideal result, you can all pass through a sieve. We put the cream on a small fire and cook until thick, all the time stirring. When the cream has cooled down, we introduce into it in small portions butter, mixed with sugar powder. Method of making chocolate glaze Chocolate is heated in a microwave or water bath, add butter and cream and whisk thoroughly to get a uniform shiny mass. Note. Glaze is prepared at the very end of the process, when we are already starting to collect the cake. Collect the cake Put the soaked cakes on a flat dish, lubricating each of them with cream. The last cake is smeared with a thin layer of jam and cover the top of the cake and sides with icing. We put our construction for several hours in the fridge so that the cake is soaked. 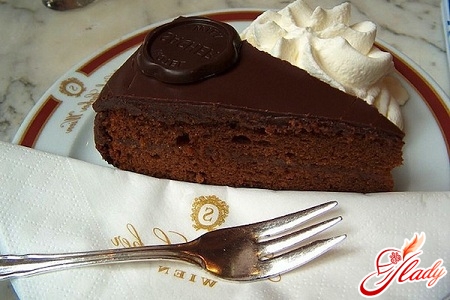 To smear the upper crust, you will also need3-4 tablespoons jam or confiture (of your choice), it is desirable that they are combined harmoniously. Method of cake preparation: Dough Recipe Mix the flour with cocoa and sift through a sieve. Mix the yolks with half a glass of sugar and beat so that the sugar is completely dissolved, and the mass becomes homogeneous. Chop the whipped proteins with a pinch of salt, then add the condensed milk, the remaining sugar and sour cream. Whisk all together for about 3 minutes. Carefully combine the protein and yolk mass, gently stirring from the bottom up. After this, enter in small portions flour mixed with cocoa. The resulting dough should be poured into a suitable form and baked in an oven heated to 200 degrees, about an hour. After 15-20 minutes, you can slightly reduce the temperature. Ready to take the biscuit out of the mold and leave it for a few hours. After that, it can be cut into three parts. Cream recipe Yolk whisk with water, then add condensed milk to it and cook in a water bath until the mixture thickens. To cool. Soft butter beat up the sugar with sugar, add vanillin or vanilla essence, and also cocoa and continue whipping. Combine with the custard, injecting the oil mixture in small portions and whisking. Recipe glaze Chocolate melt in a water bath or in a microwave, gently combine with oil. We collect the cake. Each cake is greased with cream and laid one on another. Lubricate the last cake with jam and cover with a warm glaze. We leave it for impregnation in the refrigerator for several hours. Note. If desired, you can lightly soak the cakes with liqueur or rum. If you are not sure that you will be able to cut a quality baked cake into three parts, you can bake three separate cakes. The recipes offered to your attention are similar in many respects, but there are also differences - both in the preparation of the dough and in the cream. Of course, you can use your creative achievements. Cook delicious pastries and cheer your loved ones. Bon Appetit! We advise you to read:

Soft waffles: a delicious dessert with your own hands

Cake of Prague at home

Sugar glaze: a recipe for cooking