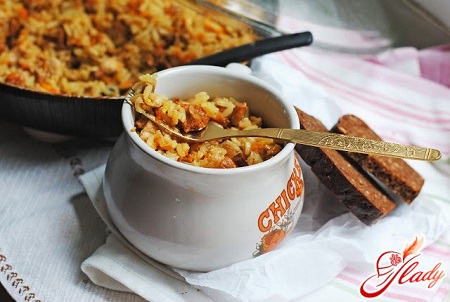 There is a legend that pilaf came into being yetin the days of Tamerlane. Once during a long campaign it happened so that a large army had nothing to feed, because the food had run out and only the meat of a ram, carrots, onions and rice remained from food. Tamerlane was puzzled, because his soldiers needed strength. Then the old sage came to his aid. He advised him to cook pilaf and gave him such a recipe: to melt the ram's mutton in a large cauldron, to put there first meat, then onions and carrots, and when all this goes the divine fragrance, add rice, which should have doubled in size. The wise adviser argued that now the great commander will not have problems with the diet for his valiant warriors, since this dish is so high-calorie that, having eaten one cup, the warrior could get enough for the whole day. Of course, at that time, even this wise man would not have guessed the pilaf in the pots, and there were no ovens at that time. 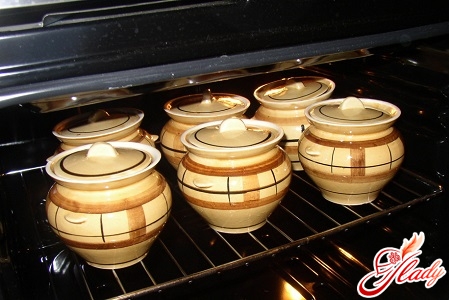 In which countries are pilaf cooked?

To this day, among the peoples of Central Asia, pilaf isnational dish. In Uzbekistan, it is so popular that without it there is not one significant event, be it a wedding, the birth of a child or a wake. By tradition, for example, on the wedding day in the early morning they gather men and treat them with this food. In this dish, intended specifically for the wedding celebration, must necessarily be added oriental peas "nahat" and kishmish (dried grapes). And the more cooked pilau and collected guests, the more prosperous and richer the family is. Prepare it for a huge number of people not everyone can, and for this purpose specially invited masters, each of which has its secret. But in Uzbekistan pilaf is cooked in different ways - each recipe depends on the region. For example, residents of Andijan use a red variety of rice. And the population of Samarkand, in contrast to Tashkent citizens, prefers to cook it only with yellow carrots. Everyone has their own preference for certain foods and spices. That is, there are Fergani pilaf, Andijan, Bukhara, Samarkand and so on. But any real pilaf must melt in the mouth, be crumbly, have an unusual flavor and a gentle, unique taste. Many people like pilaf, but since this is a non-diet dish, modern cooks have found a way to make it so. Before, nobody cooked it in the oven. 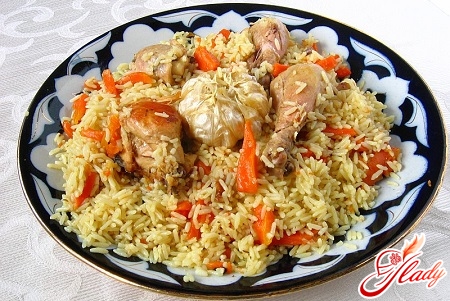 As it turned out, you can cook pilaf in a pot,which turns out not less tasty, and calories in this dish is much less. Pilaf in an oven in a pot is so easy to cook that even a novice in the culinary business will cope with it. To prepare this dish in the oven, you will need the same products, of which it was prepared hundreds of years ago. Of course, it is not necessary to use lamb meat, it is perfect for dietary cooking and veal, but with chicken meat it will be even more tender. It will also be necessary to buy carrots, onions and vegetable oil - it will replace fattening fat. Need and pots themselves. It's better if they are made of real clay. You can cook in a pot in several ways. The first recipe is less caloric than the second, since it will not have fried foods. It will suit people who are on a strict diet. The second is also considered dietary, but only the main dish will be cooked in the oven, and the roasting will be carried out on fire. In the rest everything is cooked the same way. So, onions and carrots will need to be cleaned and rinsed thoroughly. Onions need to be chopped in half rings. Carrots need to be cut in the form of medium elongated brusochkov. While this process is happening, it is possible to rinse and pre-rinse rice in the water in advance so that it swells, since the food is cooked a little longer in the oven. If cooking pilaf on fire takes 40 minutes after laying rice and covering it with a lid, then it will be cooked in the oven for about 1 hour and 20 minutes. Meat, selected to taste, you need to cut into medium pieces. After this, all the products should be distributed in layers by pots. First, you need to pour a little vegetable oil, put the meat, then onions, carrots, and on top of the rice. Each layer should be salted, but it should be done carefully, since the over-salted pilaf will be inedible. On the rice must sprinkle a little zira, you can add saffron for the color. A special aroma will give the dish and garlic head, which can be placed in the rice whole mass. If there is, you can add dried fruits of barberry or raisins (kishmish). And only when all the products are laid, it is necessary to add water. And here is a very important point! If there is a desire to cook exactly pilaf, and not porridge, then water should be added very carefully. As a rule, it should not cover the rice more than a quarter of the little finger. After all the pots are covered with a lid and sent to a preheated oven. The second recipe, as written above, differs by pre-frying vegetables on fire. The dish in this case will be more flavorful and nutritious. To do this, it is necessary to heat vegetable oil in a small cauldron, then put pieces of meat and fry them over medium heat. After throw the onion, put out and then add the carrot. When everything is fried, you need to add a little water to cook the meat. At this stage, this procurement is called "zirvak." All this should be added and spices added. Keep on fire for 25-30 minutes. After that, turn off the gas and allow the products to cool. Then the parison along with the liquid is spread over the pots, add rice on top, close the lids and send it to the oven. In this case, the dish will be cooked for about 1 hour.

There is one secret: so that the pilaf was fragrant, do not ignore such spice as zira, as it gives the exquisite flavor to this dish, and no recipe of pilaf that is used in Asia is prepared without it. An important point is that pilaf in the oven must be cooked with the soul. It is believed that this ancient yarn feels the energy of the cook, on which it depends, whether it will turn out or not. Of no small importance is the fact of what sort of rice is cooked this dish - the taste of this dish directly depends on it. If a yellow carrot is used, then water should be added less, since it is more watery. Observing all these cooking recommendations, you can treat yourself to an unconventional dish that diversifies the diet and surprises the guests who will still ask for the recipe for this amazing dish.

Fish in batter with mayonnaise: recipe