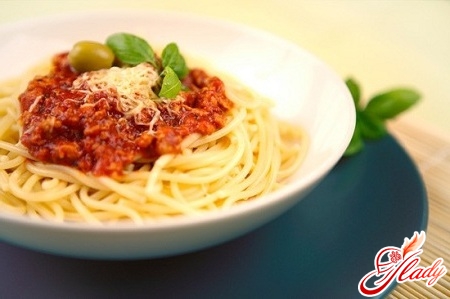 If you are not indifferent to Italian cuisine, oreven if you just love pasta, then spaghetti with bolognese sauce should you like. This dish is somewhat like the usual for us pasta with goulash. But still it's not just pasta and not goulash at all. This is a real Italian dish, which is very popular with Aborigines and is gaining popularity with us. However, in order to prepare real Italian spaghetti with bolognese sauce, you need, first, to buy the "correct" spaghetti, and secondly, you must be able to cook them correctly. And, of course, you need to properly prepare the sauce itself Bolognese. Shall we try?

The taste and quality of spaghetti is determined by varietieswheat, from which they are cooked. For the production of real Italian spaghetti (from which do not recover) only wheat of solid sorts is used. Russian producers label such spaghetti with group A. In addition, real spaghetti includes only water and flour. Of course, it is possible to determine the authenticity of the solid flour indicated on the package only in laboratory conditions. Therefore, we will take our word from the domestic manufacturer. However, choosing group A spaghetti, nevertheless we will pay attention to some nuances. First, such pasta is sold only packaged. Secondly, they differ in appearance. These macaroni are pleasant amber color, translucent with patches of dark spots visible on the surface. They are not very digestible, and the water after them remains transparent. So, choosing spaghetti, we must properly boil it. We take a large saucepan and pour water into it at the rate of: for one hundred grams of spaghetti - one liter of water. Now put the pan on the fire (maximum) and wait for the water to boil. To make it boil faster, add a few pinch of salt to the pan. Then into the boiling water slowly lower the spaghetti so that they fully fit in the pan, and wait until the water boils again, and then reduce the fire (to the middle). Cook the spaghetti, stirring constantly (we take a look at the packaging for the preparation time). When the pasta is almost ready, we dump them from the pan into a colander and let the excess water drain off. Immediately served on the table, watering or mixed with the sauce. Therefore, the sauce should already be prepared by this time. Prepare a classic sauce in our realityis problematic, because it includes pancetta (Italian bacon), which we find difficult to find (if at all possible). However, for this sauce the following ingredients are needed:

Preparation: Mine and clean the vegetables, and then very finely chop them. Also grind and pancetta. Then pour olive oil and butter into the saucepan and fry the bacon and vegetables in it (about ten minutes). After that, we add minced meat to the toast and continue to fry for another ten minutes, after which we pour out the milk into the sauté pan and extinguish the sauce over a small fire. When the milk is absorbed into the mince, add to the red wine sauce and continue to cook until our dish thickens. All this time do not forget to stir the sauce. The next stage of preparation of sauce will be the addition of tomatoes and spices. Tomatoes mash into a gruel, mixed with all spices prescribed according to the recipe (we add them to your taste) and spread it into the saucepan. Then we reduce the fire to a minimum, cover the saucepan with a lid and leave the sauce to stew for two hours. Long? But so it is laid down by the recipe. And if the sauce has time to get too thick, then pour some hot water into it. Strictly speaking, after this time the sauce of the Bolognese is considered ready. And you can serve it with spaghetti.

In any country, every overseas recipenecessarily passes the period of adaptation. That is, over time it acquires a completely acceptable form for the inhabitants of this country, and its ingredients are replaced by conventional products or even disappear from the recipe. The Bolognese sauce was also an exception, the recipe of which Russian housewives adapted to their own taste and capabilities. Ingredients:

Preparation: For bolognese sauce it is better to use freshly-rolled or simply chilled minced meat, but not frozen. And instead of real beef broth, it is not forbidden to take a broth cube and dissolve its half in a glass of hot water. So, my carrot is cleaned, rubbed on a grater and we pass (on slow fire) in a frying pan with vegetable oil. Notice that we pass the carrot, and not fry, that is, we do not let it brown. When the carrots are half cooked, add the finely chopped onion into the frying pan and continue to pass all together. After the vegetables are soft, put the mince into the frying pan. Add fire and fry minced meat, breaking it into grains and watching that it does not stick together in big lumps. When the stuffing is ready, put the greens in the pan and add the tomato paste diluted in the broth. Cover with a lid and simmer the sauce for at least half an hour (but preferably longer). With a ready sauce, we pour hot pasta pasta and serve it with spaghetti with bolognese sauce. 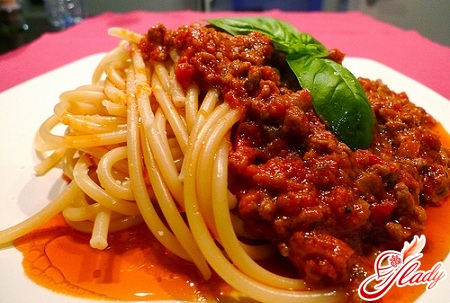 To make some clarity in our idea of ​​traditional Italian cuisine, we note that:

Here's an interesting sauce! Prepare an Italian pasta with it, cook your favorite spaghetti, cook with pleasure. Enjoy your appetite and creative mood! We advise you to read:

Recipe for sweet pilaf: a dish for breakfast, lunch and dinner

Pilaf at the stake: recipe

Chicken with vegetables in the oven

Pilaf with mussels: recipe for fresh and frozen seafood