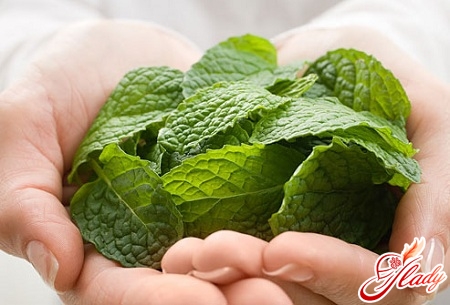 People from ancient times gave plants magicalproperties, and, we note, is not unfounded. Today, the ability of plants to heal and even kill has been proven by science, and medicine has long established an officially recognized direction called phytotherapy. Some green doctors disclose their secrets only to professionals, and some are actively used in folk medicine. Many plants, possessing certain curative properties, are simultaneously used in cooking or in perfumery. One of the vivid examples of such a universal creation of nature is peppermint. Everyone knows that mint treats. Its unique properties were appreciated by food industry workers as well as perfumers. In addition, mint is actively used in home and professional cooking. What is unique about this fragrant herb? What are its useful properties made people build peppermint into the rank of medicinal plants? And most importantly, what and how can you treat with mint? Let's figure it out.

Why peppermint has found so wideapplication in traditional and non-traditional medicine, in food and cosmetology products? Useful properties of peppermint are based on the content of menthol, or rather, menthol oil, which is rich in leaves, and inflorescences, and stems. In the inflorescences of mint contains up to six percent of menthol oil, in leaves - about three, and in stems - up to three tenths of a percent. At the same time, the main source of medicinal raw materials was the leaves of peppermint. But interestingly, mint is collected only during flowering and only in the first half of daylight hours: it is believed that at this time the content of the essential oil in the leaves reaches its maximum. The main component of menthol oil is menthol, which contains up to seventy percent of it. In addition to menthol, this ester contains little menthone, mentofuran, pulegon, carotene, oleanolic and ursolic acid, betaine and esters (volatile substances) of menthol, valeric and acetic acid. The chemical composition of mint supplements ash, zinc, magnesium, chromium, copper, nickel, lead and many other macro- and microelements. The collected leaves of peppermint are dried in special dryers, as when dried in the open air mint partially loses its useful properties. Correctly dried mint has a strong aroma and slightly burning and cooling taste. 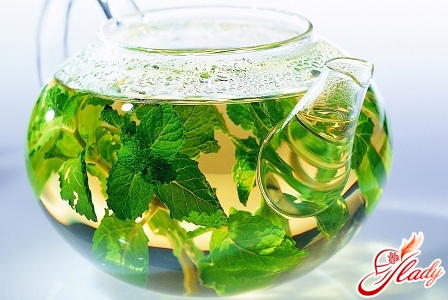 What is useful for mint?

The use of peppermint is widespread intraditional and folk medicine. Peppermint (extracts from its leaves) soothes, relieves spasms, has analgesic, choleretic and disinfecting properties. It increases blood circulation (capillary) and improves the functioning of the intestine. Mint oil, which is made from the ground parts of the plant, use 10-15 drops for nausea and vomiting, with intercostal neuralgia and heart pain. Mint drops help cope with toothache and migraines: taking 10-15 drops of oil before going to bed, chedlovec gets rid of insomnia and anxiety. The healing properties are inherent not only menthol, but also all other components of mint. Therefore, tinctures and decoctions of dried and fresh mint leaves relieve nervous overexcitation, improve appetite and increase efficiency. To prepare a decoction of mint, you need to take 2 tablespoons of dry shredded leaves and pour half a liter of boiling water. Drink this infusion in half a glass 3 times a day before meals. The use of mint in helminthic invasions and pulmonary diseases was common even before the era of antimicrobial and antiparasitic drugs. For this, patients were prescribed to drink fresh mint juice several times a day. However, today such treatment is irrelevant, although effective.

The healing properties of peppermint in traditionalmedicine is used mainly in drugs that relieve nervous excitability and normalize heart activity. This, for example, drops Zelenin and herbal elixirs for the treatment of vegetative-vascular dystonia. Peppermint is known to us mainly in the form of dried leaves, which come in all sorts of herbal preparations: soothing, gastric and carminative. No less known are the aforementioned mint drops, which relieve attacks of nausea. Mint leaves come in and Zdrenko's antidiabetic collection. Contained in the leaves of mint, menthol is used in the treatment of angina pectoris, runny nose and migraine. The universally known tablets Validol and Valocordin also contain menthol. It also enters into the composition of the miraculous balsam "Golden Star". In medicine, mint and its constituent menthol are used in the form of infusions, oils (Oleum Menthae piperitae), tablets (Pectusin), drops (drops of Zelenin), alcohol solutions (Menovazine), ointments (Boromentol and Gold Star), aerosols (Kamphomene) , candles (Anestezol). However, menthol-based products are far from safe. For example, a very sharp and strong smell of menthol can cause bronchospasm and even stop breathing. And the uncontrollable and uncontrolled use of mint preparations can provoke heartaches. 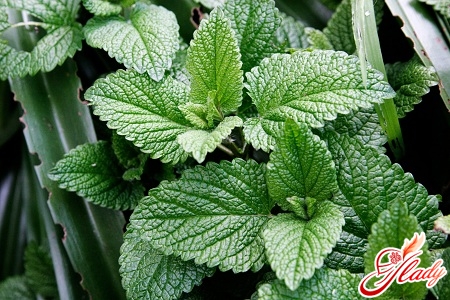 The herb of peppermint has found wide application innon-traditional (folk) medicine. It is this area that includes recipes for decoctions and infusions for the face, based on the use of peppermint. Daily washing with infusion of mint removes redness and irritation on the skin, due to a soothing and antiseptic effect. Decoction of mint is indicated for bronchitis. With gastrointestinal diseases, mint broth helps to cope with dysbacteriosis, colitis and enterocolitis and chronic inflammation. Prepare the broth as follows. Two tablespoons of dry herbs pour two cups of boiling water and insist until completely cooled, and then filter. Ready-made decoction takes three times a day for one-third of a glass. Analgesic and anesthetic properties of mint are used for rheumatism, as well as for the removal of painful sensations after insect bites. To do this, put compresses with mint oil or mint broth. Tea with the addition of mint leaves helps to overcome insomnia, is shown with rapid heartbeats and to relieve heat. In folk medicine, a mixture of peppermint and olive oil treats burns, and broth of mint or inhalations with menthol oil - catarrhal diseases. Recently, people increasingly prefer to use natural remedies for the treatment and prevention of diseases, paying attention to the useful properties of plants. Not an exception, and peppermint, known since Antiquity and remains popular to this day. Be healthy! We advise you to read:

Pigmentation on the face: the causes of its appearance

How to cure depression yourself?

Diet for allergies: what can and can not be allergic

Fruits for gastritis - what, how many and when?