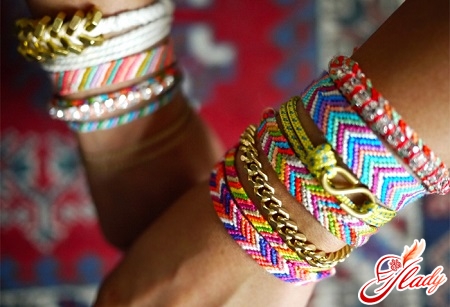 Baubles are often called bracelets of friendship. It is believed that they bring good luck. In addition, it is an original and stylish accessory. The easiest way to braid the baubles is from thread to mulina. You can buy them in shops for needlework, the brighter the threads, the more beautiful the product will be. Color bracelets will be a unique decoration, help stand out from the crowd, and will also be a good gift for friends. How to weave bra from a floss? To learn this is not difficult, you just have to be patient. For work you will need:

In order to calculate the length of the filaments,measure the volume of the wrist and multiply this value by 4, adding 5-10 cm to make the bracelet ties. The ends of the threads are fixed with a pin, then when weaving, the baubles will not twist. Before we begin to weave a bra from a floss, one must learn how to perform 4 basic knots. 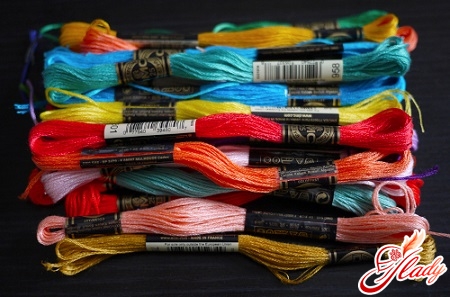 Types of units and techniques for their execution

Thus, from the set of nodules tied upin different ways in a certain sequence, the pattern is weaved. There are a lot of variants of weaving. First, it is necessary to master the simplest and most accessible to understand the scheme of weaving the baubles from the mulina. Subsequently, you can master and more sophisticated techniques for making bracelets and other fashionable jewelry, knowing how to weave the baubles of thread. 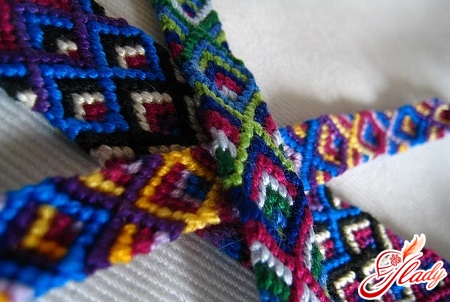 Ways of weaving the baubles

The simplest weaving used inis a pigtail. It is woven with 3 threads. If the number is more, then they are all divided into 3 parts and the usual plait is plied. So often the ends of a floss are braided when finishing work on the product. But there are schemes of weaving of 4 and 5 elements, then we get more interesting and beautiful bracelets.

Manufacturing of baubles with oblique weaving It is necessary to take,for example, 6 threads of a floss of the desired length. Let them be in 3 colors, 2 in each color. After the mulina will be knotted and fastened with a pin, you can go directly to the oblique weave. To do this, the threads are sorted by colors, then the first on the left are 2 nodules on the second. In the same way knots knit the first thread on the third, fourth, etc. It is necessary to try to place each subsequent knot slightly below the previous one. After the end of the first row, again the first thread is taken from the left and the second row is padded. And so, from left to right, we row along the row. After reaching the desired length of the bracelet, at both ends braids are braided approximately 2 cm, which ends with nodules. In order to fasten a fresco on your hand, you can make a loop at one end and tie a bead on the other, which acts as a button. But this kind of fastening is not very reliable and the bauble can accidentally unfasten. It is best to buy in the needlework store locks of the right color and design. Straight weaving can create more complex patterns. Leading here will be the extreme left thread, which must be done longer than the others. Twisting each thread one after the other, it is necessary to finish the first row, then the same row is followed by the second row from right to left, then the third from left to right. So you have to weave to the desired length of the bracelet. If it is necessary to begin weaving the pattern, then the leading thread is braided axially. The nodule then changes color and you need to do it in the opposite direction, then you can continue to weave the leading thread. Weaving according to schemes Having figured out how to weave bracelets from threads according to schemes, you can learn how to make very beautiful and original bracelets. At first it is better to use ready-made schemes, then you can compose them yourself.

According to the schemes, braided banners with variousdrawings, with names, with sharp corners. Very fashionable is a pattern in the form of checkers. Very interesting looks pattern from diamonds of different colors. To diversify the bracelets and give them originality, you can make baubles with rhinestones, chains. There are schemes in which beads, beads and metal elements are interwoven.

Bombs for the bath with their own hands

How to make a flower from paper with your own hands?

Toy with own hands