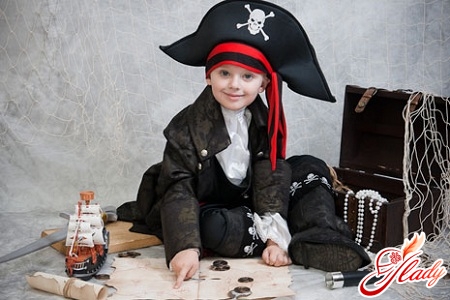 Boys are bunnies, girls are snowflakes. This is how the roles of children were distributed (and continue to be distributed) at the kindergarten New Year's matinees. And if the girls of other chances were almost never given (if only squirrels), then the boys were dressed up with gnomes or Petrushka. Do you know why? Because to make such a suit was on the strength of any mom. Today's parents are in a winning position in comparison with their predecessors. First, they can simply buy their child a ready-made suit, and secondly, the options for the New Year's costume for the boy today are simply more than twenty years ago. And all this thanks to the new fabulous heroes of the males. And even if you are not able to sew a New Year costume for a boy with your own hands, you can make such a costume only if you have enough imagination and skills in cutting and sewing. Here are just some ideas for such costumes.

A minimum of effort will be required for the costumea wizard boy. By and large this costume is already in every schoolboy. In any case, trousers, a shirt and a cardigan are sure to be found in his wardrobe. And now the main accessories are mantle, glasses, magic wand. The mantle can be made from a cut of any suitable fabric of black or dark blue color. And you do not need to sew the same cloak with sleeves, like the movie Harry. Just make a large cloak. Round eyeglasses can be borrowed from someone from friends, but do not forget to remove the glasses with diopters from them beforehand. And if they have none, then make a frame of ordinary wire and paint it with aerosol paint. With a magic wand in general, no problems. Any long needle can easily turn into such a wand if it is wrapped in a beautiful braid and decorated with paillettes, beads or fir-tree tinsel. Well and a scar in the form of a lightning you for certain can draw with the help of the cosmetic pencil. 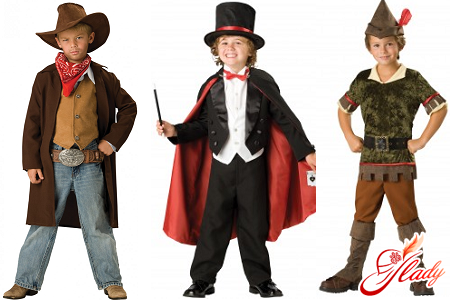 The idea, of course, is not new. But the costume is also very easy to make. Find a checkered shirt and jeans. Look for a suitable neck scarf in your wardrobe. The usual waistcoat is decorated with a fringe - now almost ready suit of the cowboy. Business for a cowboy hat. By and large for a child's suit any hat with wide margins (even thatch) will do. You just need to properly break its fields. Pirate costume make it easier. Pants, vest, bandana and a black bandage on the eye. And if the bandana is decorated with an application in the form of a skull with bones, then the pirate will be irresistible. Yes, and do not forget that both of these costumes assume the use of such an attribute as a toy gun. Believe me, with a gun in hand, your child will be delighted with any costume!

Some special skills making thisthe costume does not require either. True, you have to tinker with paper to make a cylinder. First of a piece of Whatman you need to cut out a rectangle and roll it into a pipe. Height and diameter count, based on the age of the child and the size of his head. Now cut out the bottom: the diameter of the pipe plus one and a half to two centimeters. Then, this "extra" edge of the bottom cut into denticles, which bend at right angles to the surface of the bottom. And then glue these denticles to the inside of the cylinder, covering the bottom of the pipe with one side. Cut out the ring that will become the fields of the cylinder. By the inner diameter of the ring also leave a stock for connecting denticles. You paste it in the same way as the bottom, attaching it to the underside of the cylinder and filling the denticles into the inner part of the cylinder. Will only stick the cylinder with gold paper or cloth. Alternatively, the cylinder can be painted black or covered with black silk. Remains only to make a cape from any suitable fabric and decorate it with foil stars. But how to make a wand, you already know.

If your child is familiar with the fairy tale of Tolstoy, thenhe is happy to dress up as a wooden man. You will need to sew a striped cap. It's very easy to do this. Cut out a cone with a rounded base, the length of which should be equal to the circumference of the head. If you do not have a suitable striped fabric, then white stripes on the white base. Then make only one seam, connecting the sides of the cone, and sew a brush to the cap. By the way, such a cap can be successfully connected with knitting needles or crochet. The jacket, which in the present Pinocchio was paper, can also be sewn from a bright lining fabric or replaced with any colored waistcoat. Shorts also fit any. And you can shorten to the right size and trousers, which do not mind cutting off. Well, make a long nose and a Golden Key from the Whatman. A finish suit Buratino striped knee socks or white socks. 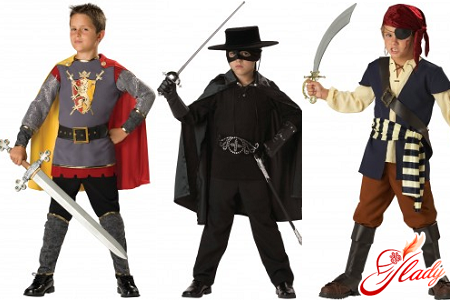 The idea of ​​this costume prompted us to filmRussian folk tales. You only need to pick up dark trousers (trousers) and a sweater. Still need foil, from which it is necessary to cut out the details of the skeleton and glue it over the crown, and a black cloth for cloak and applique. Find the image of a real skeleton and, looking at it, draw (first on the newspaper) two details - the sternum with ribs and pelvic bones. Make the size of the pattern in full size. That is, the drawn bones must correspond to the size of the present skeleton and the growth of the child. Then transfer these drawings to foil and cut them out. Paste the finished patterns on a piece of black fabric, which then sew to the sweater. From the same fabric, make a cloak, and from the paper, make a crown - a primitive dentate. Crown the crown with foil, and wrap a cloak around the New Year with a tinsel.

Actually, those ideas that we have offered you,far from being the only ones. It's just that they are easiest to implement with minimal effort and time and materials. And if you have time and desire to tinker with a New Year's attire, then you can make any of these costumes for your child:

And your baby can become a tiger or a wolf,a bear or a hare, a dwarf or an elf. In a word, there are so many fairy tales, so many variants of the New Year's costume. Look again your favorite movies and cartoons, leaf through your favorite books. The main thing is that the "suit was sitting", liked the child and was recognizable. Merry Christmas and a good mood! We advise you to read: