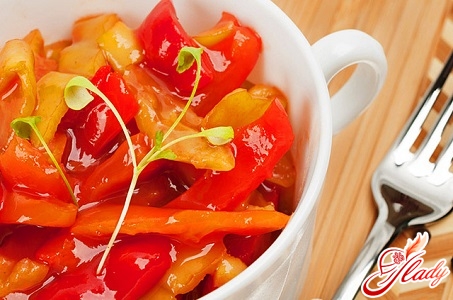 Lecho is a popular dish thatcame to us thanks to the Hungarian cuisine. The classic lecho recipe - it's tomatoes, onions and bell peppers, to prepare such a salad for the winter has become a real tradition. There are a lot of recipes for this amazing dish, which, in addition to Bulgarian peppers and tomatoes, includes various vegetables and even meat products.

This recipe is designed for 4 half-liter cans. Wash thoroughly all the vegetables. On a skin of tomatoes to make an incision in the form of a cross. It is necessary to cut only the skin, if possible, without touching the flesh. Fold the tomatoes in a bowl, beat them with boiling water, then the skin will be removed very easily. Peeled tomatoes from the film, then grind with a blender or scroll in a meat grinder. Pour the tomato puree in a saucepan, add salt, turn on medium heat, simmer for about 30 minutes, stirring occasionally. Bulgarian pepper is required to get rid of the stalk and seeds, cut into four parts. If the pepper is very large, then it is cut into large square pieces, about 3 centimeters each. Next, the recipe sends the pepper to boil to the tomatoes. They put sugar and refined sunflower oil, cook for another 30 minutes. Then add the vinegar, boil for another couple of minutes. Banks are washed, then sterilized in the oven. Lecho is poured over cans, rolled up. Billets for the winter are ready. 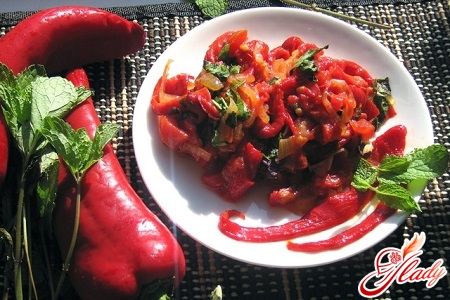 Lecho on the Transcarpathian prescription

This salad will taste to many, it can becook almost any time. Lecho according to this recipe is not closed for the winter, it is made as an appetizer. Peel onion and cut into half rings. Bulgarian pepper to get rid of the pedicels, remove the seeds from it, wash it thoroughly, then dry it with a kitchen towel, cut into half rings. In a frying pan pour the sunflower oil, put the onion when it becomes transparent, add the pepper, fry all together for about 10 minutes (constantly stirring). On the tomatoes make cuts (cruciform), pour them with boiling water, remove the cuticle, cut into pieces, add the tomatoes to the pan. They put salt and spices, Provan grasses will perfectly suit. Frying pan cover with a lid, reduce the heat, stew for about 15 minutes. Next, according to the recipe, cut the sausage into oblong pieces, add to the vegetables, cook for another 5 minutes and turn it off. Smoked sausage will add to the dish a wonderful aroma of smoke. Garlic is cleaned and crushed with garlic, green herbs finely chopped, added to salad. Prepare lecho according to this recipe is simple enough, it is served both hot and cold. Such a delicious salad will be appreciated even by the most demanding guests.

The recipe for cooking lecho with zucchini has its ownfeatures. Squash is washed, peeled, then cut into small cubes. For this, only young sauces are used. If you take old with coarse seeds, lecho will not turn out delicious. Onions cut into half rings. Bulgarian pepper needs to be cleaned of veins and seeds, then cut into strips. On tomatoes make a small incision, pour them with boiling water, peel, cut slices. Next, a recipe is prepared with a salad dressing. In a liter of water dilute tomato paste, add to it vinegar, refined vegetable oil, salt and sugar, put everything on the fire. When the marinade becomes homogeneous, put the courgettes, cook for 10 minutes. Then put the tomatoes, onion, bell pepper, stew for another 10 minutes. Pour the salad on the cans (previously washed and sterilized in the oven). Roll up the lids, or even better use glass jars with twisting lids. 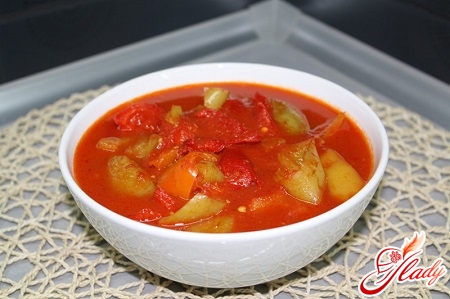 Quail eggs, boil, peel off the shell. Onion cut into half rings, tomatoes need to be scalded with boiling water and only then remove from them peel, cut into slices. If the tomatoes remove the flesh and seeds, then lecho will cook much faster. Carrots washed, cleaned, then rubbed with a grater (large). Bulgarian pepper to get rid of seeds, wash, cut into medium-sized straws. Put the butter on the frying pan, fry the onion first, then add the carrot. When the vegetables begin to cook, add the Bulgarian pepper, reduce the heat. Champignons washed, dried with a kitchen towel, cut into plates, add to vegetables along with finely chopped garlic. Put a piece of butter (creamy) in a pan, cover with a lid, stew for about 10 minutes. Smoked sausages peeled, cut into slices. Add sausage and tomatoes, salt, cook for 7-8 minutes. Quail eggs cut into halves, decorate them with a salad.

Preparing lecho in Italian can evena young, not quite experienced hostess. Onions are required to cut into half rings. Remove pepper from seeds and stems, wash, dry with a kitchen towel, cut into four halves, then into squares. Place the sauté pan on the fire, pour a little olive oil, put the onion, let it drop a little, so that it becomes transparent. Next, according to the recipe, put the pepper, fry it for 10 minutes. Put the tomatoes in their own juice. If such conservation is not available, then fresh tomatoes can be used. They need to scald with boiling water, remove the film, then grind with a blender or scroll in a meat grinder. Add sugar and salt, mix everything thoroughly, cover the saucepan with a lid, reduce heat, stew for 15 minutes. Pepper should not turn out too soft, it should be felt on the teeth. If at the end of the cooking a lot of sauce remains at the bottom of the saucepan, then remove the lid and allow the liquid to evaporate. Serve this salad on the table hot or cold, both options are quite tasty. If desired, sprinkle with herbs and add garlic.

Eggplant wash, cut the tails, cutin half, put them in salted water for 20 minutes. This is done so that bitterness is gone. After they get the eggplants, dry them with a kitchen towel, cut into small slices or cubes. Onions are cleaned and cut into half rings. Bulgarian pepper is cut into four parts, take out the grain and cut the veins. In a saucepan pour tomato juice, add sunflower oil to it, pour out sugar and salt, put vinegar. Bring the marinade to a boil, then add eggplant, onions and bell peppers. Cover the pan with a lid, stew for about 20 minutes. Glass banks thoroughly wash, sterilize them in the oven, pour lecho on the banks, roll up the lids. It turns out an excellent harvest for the winter.

Pork lard cut into small cubes. Bulgarian peppers cut into four parts, remove veins and seeds. A large pepper is cut into squares. Peel onion and cut into half rings. Put the tomatoes in a bowl, rinse with boiling water, peel them off, then cut into slices. Put the lard on the bottom of the pot. When it starts to drown and becomes transparent, add the onion, let it drop a little. Put the Bulgarian pepper, simmer for about 10 minutes. Next put the tomatoes, red and black peppers, salt. Cover the pan with a lid, stew for another 20 minutes (stirring occasionally). Lecho is served on the table as a snack. Also, this salad is good as a side dish to meat or potatoes.

Drying mushrooms in a microwave oven: the features of the process

Lecho of zucchini: the recipe for cooking this dish