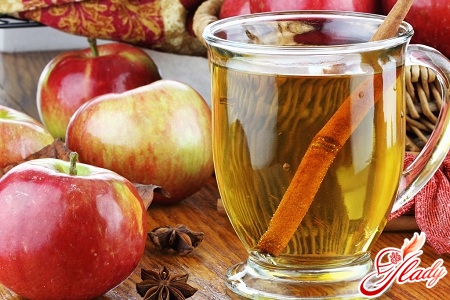 Apple season in full swing! So, let's eat without restrictions fresh apples, cook jams and jams, bake apple pies, squeeze natural juice. However, do not forget that this time is the best for making apple cider vinegar. But how to cook apple cider vinegar at home? Believe, it is possible! Given that the natural apple cider vinegar is less and less likely to appear on the shelves of stores, it is worthwhile to learn and the home recipe for its preparation. Moreover, apple cider vinegar is prepared in an industrial way, taking as a basis a basic home-made recipe. And this recipe is known from ancient times, and even in different versions.

This recipe will tell you how to make applevinegar without the use of yeast. We can say that this is the most natural recipe, so vinegar is obtained in the process of natural digestion of apples. Ingredients:

Preparation: It is best for this method of cooking to choose very ripe or even overripe apples. Suitable for this and the scavenger. But the most suitable "material" will be apples from the home garden. So, my apples, cut into small pieces and fall asleep with sugar. Sugar for sweet apples is taken at the rate of fifty grams per kilogram of fruit, for sour apples we increase the amount of sugar twice. Then add apples to an enameled or nickel-plated saucepan (plastic and aluminum utensils can not be used) and pour them with hot water (but not with boiling water!) So that it covers the fruit by three to four centimeters. After that, we remove the pan in a warm place and leave it for two weeks. Given the summer season, you can leave the pan just in the room, on the veranda or on the balcony, just do not expose it to the open sun. During this time, twice a day, mix the apple mass so that the apples do not dry out from above. After a couple of weeks, drain all the liquid out of the pan, filtering it through the cheesecloth, and pour it over three-liter jars for fermentation. And we fill the banks not completely, leaving five to seven centimeters free from the liquid. This is necessary for fermentation, during which the liquid in the bank will rise. And we wait two more weeks, after which vinegar will be ready. Ready vinegar carefully, without stirring the sediment, pour into clean dry bottles, clog and store in the dark at room temperature. 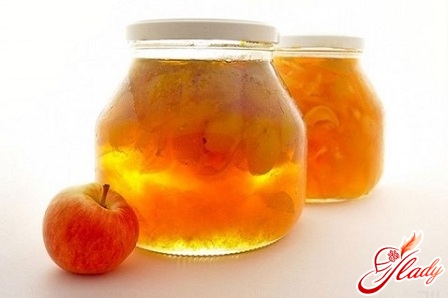 This recipe was invented by an American naturopathic doctorJarvis, who considered apple cider vinegar almost a panacea. By the way, the recipe was published in the book "Honey and other natural products", published in 1985 in the publishing house "Apimondia". It is believed that vinegar, cooked in this way, preserves all the best qualities of the products included in its composition. And for the preparation of such a wonderful product we will need the following ingredients:

Preparation: This method of cooking apple cider vinegar takes more time than the previous one. However, the result is worth it! To make vinegar in this way, very ripe apples are properly mine and cut out all the wormy and rotten flesh. Then, together with the peel, the apples are crushed with a mincer or grater. If you have a blender or food processor, you can use them. The resulting apple pulp is added to glass, clay or enamel ware and poured with warm boiled water (we take apples and water in equal proportions). Then add the mixture of honey, yeast and rye bread. The ratio of ingredients in this case is:

Bread and yeast will accelerate the process of fermentation, and honeywill restore the deficit of potassium in the body. Cover the dishes with our "raw materials" for vinegar with a cotton napkin and leave in a warm and dark place for ten days. During this time, three times a day, mix the contents of the cans with a wooden spoon. After ten days, drain the liquid by straining it through a cheesecloth or a thin cloth, determine the volume of the liquid we have obtained and add honey to it at the rate of one hundred grams of honey per liter. Then we again pour "raw materials" on clean dry banks, cover with gauze and leave to wander for forty-fifty days. The readiness of vinegar is determined by its transparency. Disappearance of turbidity is a sign of the end of fermentation. Ready vinegar is poured into clean bottles, they are clogged and sent for storage. Vinegar from apple juice How to cook apple cider vinegar from apple juice? It turns out that there is such a recipe. This method is more like the preparation of wine, only in contrast to winemaking, it does not use sugar. And the process of fermentation is significantly prolonged, as a result of which acetic acid is synthesized in the juice. And it should be noted that this recipe is surprisingly "poor" in its composition, and it includes only such ingredients:

Preparation: The recipe for its composition is more than concise, but the process of preparation is not called. Naturally, this recipe implies the use of too ripe but not overripe fruits. It is best to take apples of sweet varieties, since we will not add sugar or honey. And if you decide to use this recipe, then you will also need a juicer. So, apples sort out, mine and cut out all wormy or corrupted places. We cut apples and leave them for a while in the light, so that the fruits darken, and then distill them into juice. How many apples do you need? This is not so important. Starting to prepare vinegar, you just need to know that from one kilogram of apples you get a little more than half a liter of juice. The pressed juice is poured into a glass bottle and, using the old grandfather's method, we put on the neck of the bottle a rubber glove or a children's rubber ball. We need this to control the fermentation process. During fermentation, the juice will start to release carbon dioxide, and the balloon will inflate. The bottle with juice is left in a dark place and we follow the ball. Fermentation will last from one to six weeks: it all depends on the degree of sweetness of apples and the temperature in the room. By the way, this temperature should be about thirty degrees. So, we observe the ball, and as soon as it is inflated wholly, we remove it from the bottle, and pour the juice into a wide pan (pan, basin). Here it is boring to consider three things. First, the juice must be drained together with a film (acetic uterus) formed on its surface, in which yeast-like fungi, which are necessary for further fermentation and transformation of the juice into vinegar, live. Secondly, the dishes in which you will merge the fermented juice must be necessarily wide: the greater the surface of the liquid will come into contact with the air, the sooner the process of fermentation will proceed. And thirdly, the dishes should be filled with juice not completely. Leave some space (seven to ten centimeters from the edge) so that the juice does not pour over the edge of the pan during fermentation. We cover the dishes with gauze or a napkin (but not a lid!) From dust, flies and other debris and leave for fermentation for another 1.5 to 2 months. When the liquid stops snorting and bubbling and becomes transparent, the fermentation is finished, and the vinegar is ready. Now it remains only to pour it on bottles, straining through gauze, and put away for storage. Store vinegar in a tightly closed container in the dark. 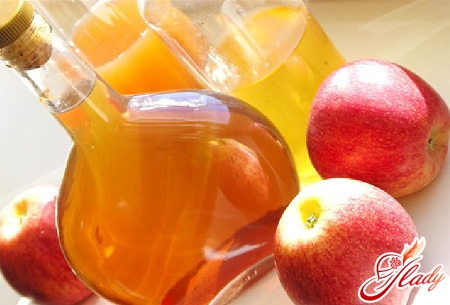 The preparation of apple cider vinegar at home is quitefeasible. So use the moment! Collect the apples and cook the vinegar, which, perhaps, will be useful not only for you in the kitchen, but it will help to get pretty, younger and get rid of many ailments. Cook with pleasure and stay healthy! We advise you to read:

Drying mushrooms in the oven: the cooking process

Cauliflower for the winter: recipes, ingredients

Carrot in Korean: a recipe that is as close to the original as possible

How to pickle cucumbers and tomatoes correctly