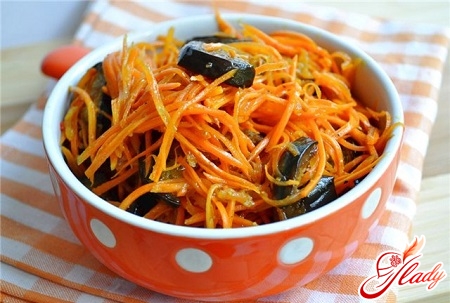 Korean cuisine was like the bestthe Russian people. Surprisingly, the Koreans came up with an excellent snack for Russian vodka - vegetables in Korean. However, to be frank, the amount of pepper and spices that indigenous Asians use in their dishes is very different from the amount that the Slavic organism used to sustain. Who was in Korea, he will understand what they mean. "Uneasy" dishes from them are those in which more than enough spices and spices, but "acute" literally "burn out" the insides. Together with the hope of healthy old age. The most favorite dish - pickled eggplants in Korean - won the hearts of our people right after perestroika. However, to this day, pickled eggplants in Korean are considered exotic, since not every hostess can cook something similar in her kitchen. As a rule, instead of crunchy and "ringing" aubergines, a simple sauce or eggplant paste is obtained. This, of course, is also delicious, but after all, the goal was completely different! What distinguishes Korean vegetables from conventional canned products "from the cottage"? As a rule, a lot of various spices. And the way of cooking, which until now was kept by the Koreans themselves in the strictest secrecy. The marinade itself gives the sweet and sour taste, for which our people fell in love with all these Korean delights! Recipes for eggplant preparation are many: they can be marinated entirely or stuffed with carrots and other vegetables. You can cut into strips and cubes - as you like. We will consider some recipes for eggplant.

Eggplants cut into thin strips. Do not clean the skin! Strongly salt and leave for several hours. Then merge the "tears" and wash the eggplants, we dry them on a paper towel. This will remove unnecessary bitterness. Strongly fry, stacking in a pan in portions. Solim to taste. Again, put it on a paper towel. We crush garlic and mix it with eggplant. On top, put the onions cut into rings and grate the carrots. Boil the brine. To do this, take water, vinegar and salt, mix and cook with the addition of spices. Spices can be different - from traditional laurushki to ginger. After experimenting, you will understand what is closer to you. However, always add peppercorns. We also add oil. Sterilize the jars and lay layers of eggplants, onions, carrots. Pour brine and roll. If you do not want to mess with the sunsets, you can put eggplants under pressure in a cold place and wait a few days. To do this you will need: 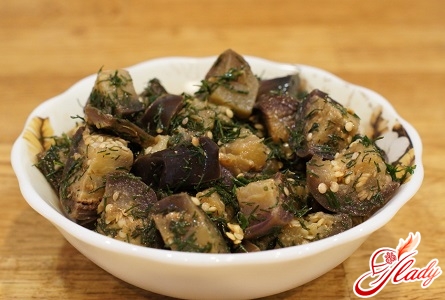 To prepare this recipe, the eggplant is cutalong tongues with a thickness of 0.5 mm. You can clean the skin, and you can leave it. On the one hand, the most useful vitamins are under the skin, and on the other hand, the skin itself is bitter and hard. So it's up to you. In any case, the eggplant should be salted and allowed to "cry out" for several hours. This will remove the bitterness. Then you need to prepare a marinade. Combine the oil with the vinegar and water, add a laurel, cloves, cardamom, bell peppers and whatever else you want. Boil the mixture, turn off and add crushed garlic after. Preheat the frying pan and pour on it 2 tbsp. l. vegetable oil. Fry each tongue, after rinsing and drying. Roasting should not be too strong, on the contrary, it is better to leave them slightly damp. After that, lay out layers, shifting with herbs and garlic. Pour each layer of marinade. Cover the eggplants with a lid and refrigerate for a long time. After 1-2 weeks the eggplants will be ready for consumption.

Marinated "blue" entirely: "the mouth of a dragon"

Small aubergines washed, cut the stalk andboil in salted water for 5 minutes. Cool, cut in half, but not to the end, leaving about 23 of the length. In the middle you can put a variety of stuffing. For example, sauerkraut or ordinary cabbage, Korean carrots ... Classically the option involves a lot of garlic, coriander, chili. All the ingredients should be mixed and filled with a medium of eggplant. Then all this should be put in a plastic bucket or barrel, put a little oppression from above and store it in the cold for 2 weeks. For 10 eggplants, 1 head of garlic, a bunch of coriander 1 pod of chili pepper. Recipes of marinated aubergines are invented a lot. Eggplants are a delicious and healthy product.

Drying ceps in the oven, cooking

Drying mushrooms in the oven: the cooking process