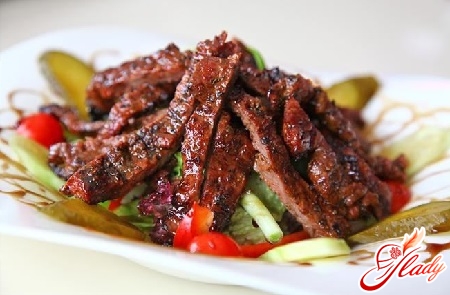 Meat dishes are always greatpopularity. Most often it's pork or beef. But for many, the best meat for cooking is lamb. Dishes with lamb are very common, starting from very simple and ending with unusually exquisite. Meat of a sheep or a ram, which is used for food, is called lamb. Since ancient times, people appreciated mutton, especially lamb meat (lamb). Many holidays, mainly Muslim, can not do without cooking from this meat. In the daily menu, lamb dishes are also not uncommon. Lamb can be considered relatively a dietary product, because the fat in it is less than in other meats. But it concerns only meat of adult animals. In lamb a lot of protein, B vitamins, iron, sulfur, fluoride, magnesium, zinc, potassium and other trace elements. The most valuable is the low cholesterol content. In addition, the lecithin found in meat normalizes metabolism, the level of cholesterol, regulates the activity of the pancreas. Therefore, lamb dishes should be present in your menu. The main disadvantage of mutton is a large number of lipids, which contribute to the development of obesity, cardiac and vascular diseases. To avoid such consequences, during the preparation of the dish, drain off the juicing, do not use butter, add vegetable garnishes. When choosing lamb, buy meat of animals, the age of which is not more than three years. Pay attention to the following:

What parts of lamb are better to choose for cooking? It depends on what you want to cook.

We bring to your attention some dishes with lamb. 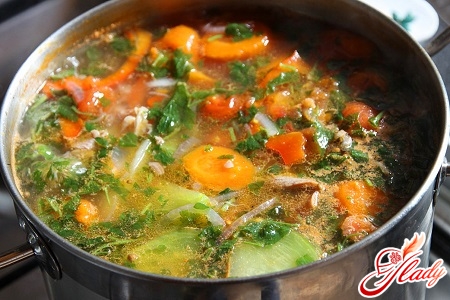 Salad with green radish Salad is very simple to prepare, good for both everyday and festive menus. Products:

Salad with horseradish This salad, rather, is closer to the appetizers. They can fill the tartlets for a buffet table. Products: 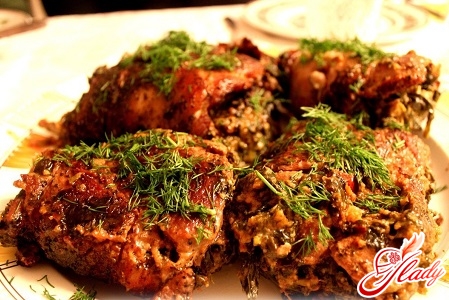 The first dishes: soups with lamb

Shurpa Dense snack soup, which is served to the boiled meat. Products:

Chowder of young lamb This soup is easy to prepare. Particularly good if potomitsya in the pot. We cook on the basis of 6 pots. Products: Lamb for the second

Lamb, stewed with tomatoes A simple and inexpensive dish for a festive menu. Products (per 3 servings):

Chops cutlets from mutton An unusually tasty dish, which does not require special preparation. Garnish is best served with mashed potatoes and onion sauce. Products:

Mutton steak in the multivark Recipe, where mutton is cooked in a multivariate. Preparation of ordinary sheep steaks for those housewives who value free time. Products:

For this dish as a side dish is goodfit fresh vegetables. Feel free to enter into your menu dishes from mutton. They can become an ornament of your table. The main thing is to choose the meat you need and prepare it properly. We hope that our recipes will help you in the kitchen.

Lazy cabbage rolls: a recipe for cooking for the busiest