The simplest recipe for this dish is a casserole of potatoes with cheese and onions. Suitable for her almost any cheese of solid varieties. Ingredients:

Preparation: The washed and peeled potatoes are rubbed on a grater for shredding or cut into very thin slices. The thinner the pieces of potatoes are, the tenderer and tastier the casserole will turn out. In the greased with butter and sprinkled with breadcrumbs, we spread the potatoes, placing the slices in a circle and overlapping. For pouring, beat eggs with milk, add salt and spices to them (to taste). Peeled onion cut into half rings, lightly mow the onion so that it gives juice, and spread it over the potatoes. Gently pour the egg-milk mixture into the frying pan and sprinkle it with grated cheese. We prepare the casserole in a preheated 200-220 degree oven for about twenty to thirty minutes. Serve with sour cream and fresh vegetables. 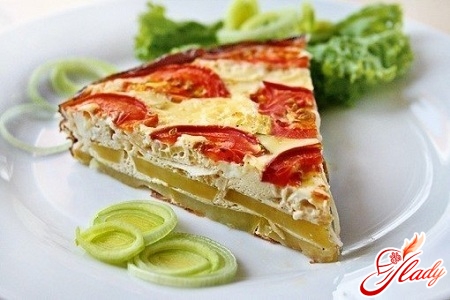 The recipe for this casserole is remarkable for the amazingly tasty cheese Munster, which is part of it. Munster is a red-molded cheese with a spicy aroma and a spicy wine taste. Ingredients:

Preparation: I cut my carrofet, peel it, put it in hot, slightly salted water and put it on the fire. As soon as the water boils, reduce heat and cook potatoes for ten minutes. Then remove it from the plate, drain the broth and rinse the potatoes in cold water. After that, we spread the tubers into a colander and let them cool and dry. Then each potato is cut into slices about half a centimeter thick. Cheese cut into cubes, after removing the red crust from it. After that, put the cheese in a saucepan, pour it with cream and put on a slow fire. Stir, cook the cheese until it dissolves in cream, and at the end of the cooking season with nutmeg. Now take the baking dish or any heat-resistant dish and put the potatoes into it, and then pour it with cheese sauce. We put the casserole in the oven, heated to 180-200 degrees, and leave the minutes for twenty or thirty. We serve with a vegetable salad.

Casserole with potatoes and cottage cheese

And here is the recipe for the original hybrid of the two most popular casseroles: with cottage cheese and potatoes. Ingredients:

Preparation: We will boil the potatoes in a uniform, cool it and clean it. Toothed garlic cloves in half and tasted them a brazier or baking dish, and then smear it with butter. Potatoes cut into slices and put into shape. Now let's prepare the curd sauce for pouring. Separate egg yolks from proteins and mix them with cottage cheese, sour cream and milk, season with salt and spices (pepper, nutmeg). After this, we add to the sauce the grated cheese on the grater. Proteins vzobem separately, and only then add them to curd cheese mass and gently mix. Put the sauce on the potatoes and send the casserole to the oven, heated to 200 degrees. We cook the casserole for ten minutes, serve hot or cooled, decorating with fresh herbs.

Potato casserole in a frying pan

This potato casserole recipe is differentway of its preparation. In contrast to the traditional casserole, it is cooked in a frying pan, and not in the oven. Note that this is quite convenient, fast and not less tasty. But the recipe for casserole in a frying pan, unfortunately, is not known to many housewives. Therefore, we suggest that you try this recipe in practice. Ingredients:

Preparation: My potatoes, peeled and grated for a Korean carrot. After that, salt it, put spices (coriander, black pepper, curry, etc.) and gently mix, not crushing potatoes, so that it does not emit the juice. Now grind the cheese and cut with olive rings. We take a frying pan or brazier, grease it with vegetable oil and lay half the grated potatoes, and we put all the cheese and olives on it. We level this layer and cover it with the second potato layer, which is also leveled and slightly compacted. Frying pan cover and put on medium fire. After ten minutes we turn the casserole. To do this, first turn it over on a dish, cover it with a frying pan, lubricate the frying pan with oil again and shift the casserole into it. In ten minutes our casserole in a frying pan is ready! Serve it best hot, seasoning with sour cream. 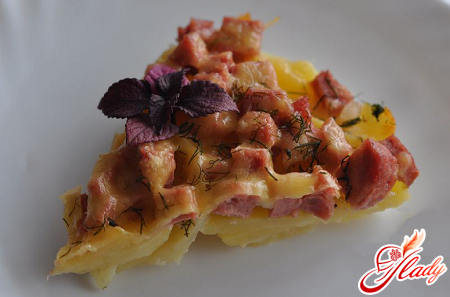 Potato casserole with cheese and ham

This recipe will be to the liking of connoisseurs of potato dishes with meat. True, we replace ham meat with ham, the recipe will only benefit from this, and the taste of the dish will not suffer. Ingredients:

Preparation: Mine, clean and cut into wedges of potatoes, after which we boil it for literally two minutes (from the moment of boiling) in salted water, thrown back to the colander and leave to cool. In the meantime, we cut the peeled bulbs with half rings, and the ham with long slabs. In the brazier we put on a tablespoon of vegetable and butter and we admit in it onion (to translucency). After that, put the ham in the frying pan and continue to cook the fry for another two minutes, and then remove it from the fire. We prepare the filling for the casserole. Eggs break into a bowl, shake them and add there the shredded cheese and sour cream, salt and pepper to your taste. We mix everything thoroughly and proceed to collect the casserole. In the oiled form, lay out a layer of potatoes, then a layer of onion-ham sauce, and pour out the sauce on top. You can limit these three layers, and you can make a multi-layer casserole: from two or three layers of potatoes and the same number of layers of pouring and roasting. Prepare the casserole in the oven at a temperature of 200-220 degrees for about twenty minutes. We serve hot or cold. The proposed recipes use raw or boiled potatoes. Note that it can be successfully replaced with mashed potatoes. So if after dinner or a festive feast you have a mashed potatoes, then boldly cook a casserole with cheese from it - do not go wrong. The main thing is to cook with pleasure. Enjoy your appetite and success in the culinary field. We advise you to read: