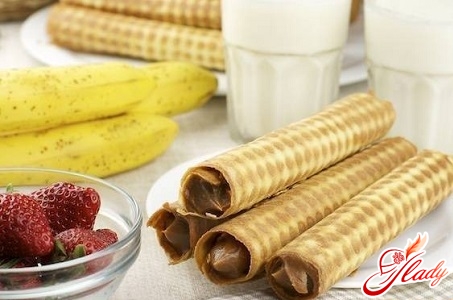 Homemade waffles are an almost forgotten treat. The modern confectionery industry spoiled us so much that we do not even remember the taste of real home waffles. But it is quite easy to cook them - there would be a desire. This is the recipe for home-made waffles we offer you. Or rather, not just one recipe, but several. So choose!

The easiest (basic) recipe for cookinghome waffles. On its basis, you can prepare wafers with any filling, roll them with a cone or a horn, add cream, boiled condensed milk or jam. Ingredients:

Preparation: Margarine is given a little thaw and lightly beaten with a mixer. Then add sugar to it and continue to whisk in a lush viscous mass. Egg yolks are separated from proteins and put in a bowl with whipped margarine. Beat again. The sifted flour is mixed with soda and, whilst continuing to beat the egg-and-oil mixture, pour flour into it in small portions. After that, add milk to the dough to the consistency of viscous viscous mass. At the end of the preparation of the dough, add the whipped whites to the hard foam and gently mix the dough. We bake wafers in electric wafer, browning from both sides. We serve with honey, sour cream, condensed milk. Or we eat just for tea or coffee. 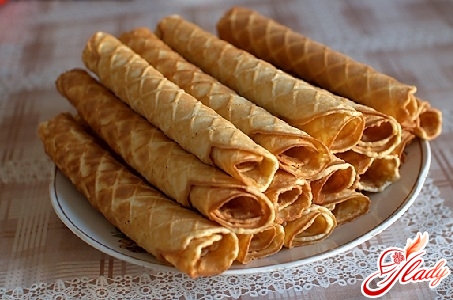 Recipe for wafers rolled into a tube, there isin a variety of options. Most often as a filling for wafer tubules use cream or boiled condensed milk. We'll make a cream for the filling. Ingredients:

Preparation: Margarine is warmed up, we add sugar to it and mix it. Then drive the eggs and pour the sifted flour, achieving the consistency of the dough as a pancake. We bake the waffles in the electric wafer up to the ruddy crust and turn into the tubes while they are still hot. To cook the cream, lightly beat the softened butter and, gradually pouring in the condensed milk, continue to whisk until the cream begins to easily move away from the walls of the dishes. At the end of whipping, add a pinch of vanillin or rum essence. The finished cream is put into the tubes, using a confectionery syringe or a confectionery bag.

This recipe for home waffles can not be called particularly popular. However, apple wafers can also be cooked, but it is very easy to make. Ingredients:

Preparation: Sugar sand beat up with margarine, and then, while continuing to whisk, we add eggs to the mixture. Sifted flour mixed with soda, cinnamon and ground almonds. Pour the flour into the oily-egg mixture and knead the dough. Then pour in the milk and add the peeled and cut into small cubes apples. We cook the wafers in the electric wafer, browning them on both sides. 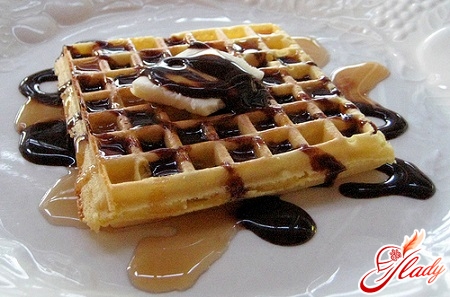 Variant of the recipe for wafers with condensed milk. We will try to make wafers with a filling in the form of nut fudge. Ingredients:

Preparation: We rub the oil with sugar, and then add egg yolks to it and whisk it. Next, add cream (10% fat), potato starch and whisk again with a mixer. After that, we put in the dough sifted flour, cognac and egg whites beaten into strong foam. Gently mix the dough and bake wafers in a hot waffle iron. We turn the hot waffles into a cone and fill it with filling. To prepare the filling, cook a jar (unopened!) With condensed milk for about three hours. Then cool it and mix the boiled condensed milk with chopped walnuts.

An interesting option is to prepare homemade waffles with a chocolate layer. Ingredients:

Preparation: We put the butter in a bowl, add sugar, milk and egg yolks to it. Beat everything with a mixer in a homogeneous mass. Then add the sifted flour mixed with vanilla sugar, and continue to beat for a couple of minutes. Whisk egg whites into a thick, strong foam, and then add them to the dough and gently mix it. Immediately after preparing the dough, bake wafers, browning them on both sides. For the filling we soak gelatin and let it swell. On a water bath we dissolve the chocolate and butter, broken into pieces. Preheat the cream and dissolve gelatin in them. After that, mix the chocolate-oily mass with gelatin, add the liquor, mix and cool. Finished cooled wafers grease the filling and add up two (like sandwiches). 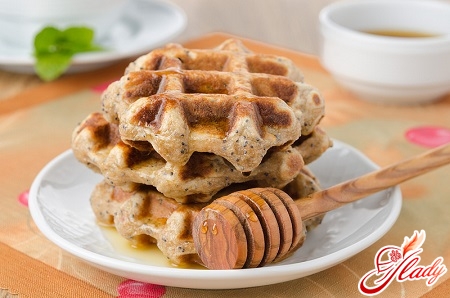 Preparation: Margarine softens and grind white. Then, continuing to grind, one by one add egg yolks, until the mass is increased by half. After this sugar mixed with vanilla sugar is added to the oily-egg mixture, pour the same whipped cream, pour the sifted flour, and at the very end, put whipped egg whites into a thick foam. We remove the dough in the fridge and leave it for fifteen minutes. We bake wafers as usual: for two to three minutes, browning from both sides. Sugar powder mixed with vanilla sugar and generously sprinkle finished cooled wafers. We serve a delicacy for tea or coffee, or treat ourselves to a snack with cocoa or milk. Here are such different options for cooking waffles. You can use any ready-made recipe or even come up with your own version. After all, homemade waffles can be made with any filling, putting in them a cream or whipped cream, a sweet or boiled condensed milk. And you can vary the recipe by adding fruit and berries, cocoa or grated chocolate, lemon zest, ground cinnamon or cloves to the dough. In short, here, as in the children's verse, all the recipes are good - choose to taste! Enjoy your appetite and success in the culinary field! We advise you to read:

Cream for biscuit cake: the best recipes for delicious desserts