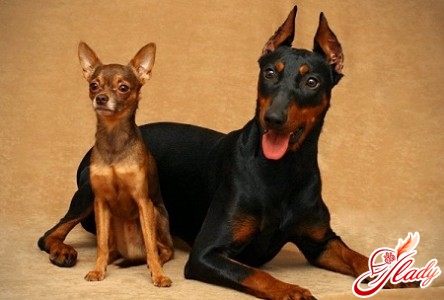 Getting a dog is not such a simple matter as it canseem at first sight. Of course, if you live in a private house with a large yard, in which there is a place for an enclosure, there will be no problems with the choice of the breed of your future friend. And what about the owners of small apartments? How to get a dog in such conditions, when the place is barely enough even for family members? In this case, the selection of the breed should be approached with all responsibility. And think not only about its convenience, but also about the convenience of the pet, because some dogs are not suitable for living in an apartment. In this article, a conversation will be about a breed called the German Pinscher, which is ideal for keeping in an apartment.

The roots of the German pinscher come from Germany,For the first time this breed appeared in the beginning of the XIX century. The main application of this animal was hunting for rats. And only after many years it began to be used as a guard dog. In the period before the First World War Pinscher was very famous and popular as a cheerful, cheerful and vigilant partner. The closest relatives are the Doberman and the Dwarf Pinscher, which were obtained by crossing the German Pinscher at the turn of the 20th century. Until recently, the German Pinscher was popular only in his homeland. However, in recent years, many Russian breeders prefer this breed of dogs. This is due to the playful and cheerful nature of the pinscher, which he pleases his masters even in old age. And, despite such friendliness, the watchdog features of this "German guest" are quite developed. He is very vigilant and distrustful of strangers, but his host shows sincere love in any situation. There are two types of pinschers - one and two-color. One-color are red or the color of a reddish deer. Bicolour ones have a black shade with mahao or brown marks. German Pinscher has average sizes and weights from 11 to 18 kg. He is graceful and muscular, perfectly composed, with an intelligent gaze. This breed, of course, is "indoor" and domestic, but it also needs to throw out its energy. Therefore, the German pinscher should be walked freely, because his temperament, seeming to be sleeping in the rooms, on a walk increases to madness. After a walk, after jumping and running, he again will behave calmly, quietly and imperceptibly. In addition, the German pinscher is very hardy and with appropriate care, can survive to 15-17 years. And this is the main thing for people who are especially attached to their pets and who are hard at losing. 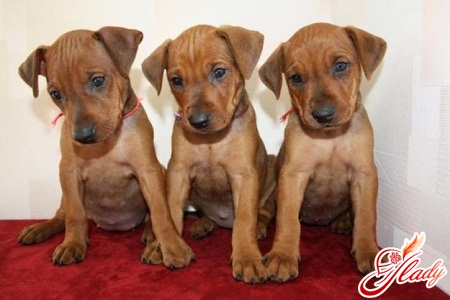 Advantages of the breed

Dwarf German Pinscher has a hugea number of advantages that allow to call the breed "multi-purpose". Pinschers simply have a tremendous leap, which reaches 1 - 1.5 meters in height. This feature allows the dog with great pleasure to compete in skill competitions and win high awards. The past of the German pinscher rewarded him with a magnificent flair, therefore, the race on the trail turns into an exciting game for him. This skill is also useful if you participate with your pet in various activities. The hunter's profession includes dogs with strong, fighting character, which are peculiar to the German pinscher. For you it will be a huge plus, since your pet skills will definitely show for the protection of the territory, namely the home of their owners, to which the pinscher is selflessly devoted. Despite its size, the pincher will easily demonstrate a formidable look, capable of depriving the attacker of an intruder to encroach on someone else's property. And when a daredevil, little afraid of a threatening species, the host team will give the German pinscher to demonstrate his skills and quite large sugar-white fangs. The vigilance of German pinschers amazes, while they do not serve the voice senselessly, that is, they will not bark loudly and for long just like that. Pinscher shows natural rigidity only when the enemy penetrates. And my work performs very high quality. 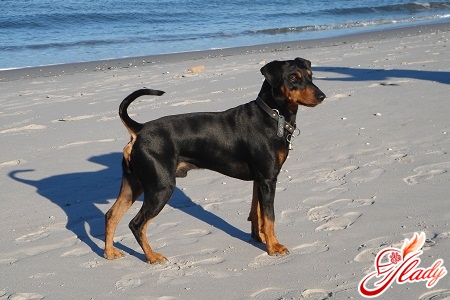 A real "member of the family"

Pincher is very good-natured towards the kids. He acts like an experienced and beloved nanny who cares for children, patiently enduring all the suffering. And not only children fall under his care, but also all the animals that live in the house. Therefore, if a cat, a hamster or a parrot is already settled in your house, this is no reason to refuse a puppy of a German pinscher. After a while, before your very eyes he will become the best friend to all your pets. Attachment to the owners of this breed is very great. German pinscher has a high canine intelligence, and can masterfully use the softness of the human heart. He achieves excellent results in the study of the hosts and understands how to arrange them to themselves, playing various roguish jokes. The ideal atmosphere for him, when in him souls do not chail, groom and constantly care. The breed is well acclimatized in the conditions of our country: light frosts are not terrible for him, and in stronger ones it is necessary to limit walks with a dog. But a warm jacket or jumpsuit will always help if you like to run around accompanied by your pet. In this form, he will accompany you under any conditions. It should be remembered that the German pinscher is hard at perceiving losses and is experiencing separation from his masters. And if you decide to get yourself a "friend", then be prepared for the fact that he will live in your family all his life. Yes, and how you can give in the wrong hands this miracle! After all, the uniqueness of some of its characteristics is simply amazing. Looking into your eyes, the pinscher is able to smile and talk with you. His intelligence and willingness to come to the rescue at any time deserves respect. At the same time, he adores adventures and seeks to constantly take part in them directly. In other words - the German dwarf pinscher is able to become a full member of your family. We advise you to read:

Talking parrots and their abilities

What to feed the hamster?

How to wean a puppy to bite?