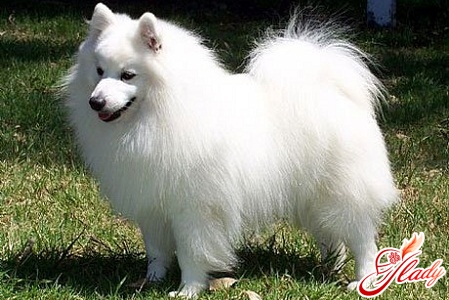 Times change, tastes change, fashion changes. Including the fashion for pets. And if Chekhov's "lady with a dog" was inseparable from a German Spitz, then modern Japanese women are very interested in the Japanese spitz. "And what's the difference, you ask," he is a Spitz, a fluffy, sharp-nosed, gay dog. " So it is so, but only Spitz - this is a whole group of breeds of decorative dogs. Each breed of Spitz - it's its history, its standard and its features. They have much in common, but a lot of differences. Here, for example, what is fashionable today Japanese spitz?

Origin of the breed

According to zoologists and cynologists-breedersJapanese spitz comes from northern dogs, or rather from Samoyed Laikas. It was from them as a result of painstaking selection selection and received a new breed - a Japanese spitz or Samoyed Laika in miniature. Formed this breed began in the late nineteenth century in Japan, and in 1948 was a national recognized cynological union. The first officially registered representative of the breed was a Japanese Spitz named Hakurio, who was born in the summer of 1947. And in 1959 in Japan the cynological Association of Japanese Spitz was founded, uniting breeders and fans of this breed. For a long time the popular and favorite in Japan breed of Japanese Spitz is becoming more popular in other countries of the world. And our fatherland is no exception: today the demand for these dogs is quite high.

In accordance with the breed standard Japanese Spitzmust be strong and flexible physique, height from twenty-five to thirty-eight centimeters and weighing from five to ten kg. The head is rounded with triangular ears, pointed muzzle, a miniature black nose, black dense lips, almond-shaped dark eyes with black edging. The body of the Japanese spitz is strong, with well-defined withers and neck, broad chest and waist, and a tight belly. Paws muscular, with rounded pasterns and fleshy pads. The tail that is rolled into the ring is snug against the back. The wool is upright, thick, long with a soft undercoat. On the muzzle, front legs and ears, the fur is shorter than on the trunk. On the neck and chest - a luxurious fluffy collar, and on the back legs - feathers. The color of the wool of the Japanese spitz is exceptionally white, without spots and marks. 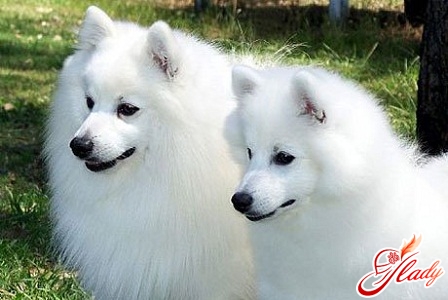 Features of the breed

The Japanese Spitz is a companion dog. He has a cheerful disposition, is playful and good-natured. At the same time, these little dogs are quite stubborn, so when you bring up from the master you need perseverance and patience. However, with the right approach from them, it is easy to achieve obedience, so the Japanese Spitz are naturally clever and devoted to the master. These dogs have an innate guarding instinct, they treat distrustful people to strangers, but they get on well with other pets. They are easy to train, they are tender and loving to all members of the family and do not cause any special problems in the content. For example, the Japanese Spitz is neat and clean, rarely barks, almost never chews furniture and shoes (except in puppy-age). The dog of the Japanese spitz is perfect for keeping in the apartment. It will not be burdensome for older people and always find a common language with children. In addition to all their positive qualities, these dogs have excellent immunity, they rarely get sick and are not prone to allergies. Luxurious wool of the Japanese Spitz requires constant, but easy care. The fact is that the dirt that has fallen on the wool leaves no traces on it after drying. It simply shakes off, and the wool remains clean. Here is a unique "dirt-repellent" property is in these dogs. And the main care for their hair is only in the periodic combing out. In general, for the dog the Japanese spitz description of the breed is as follows. It is miniature, decorative, has an effective appearance and a "sociable" character. She will perfectly cope with the role of a pet, brighten up the loneliness of the elderly and add joyful moments to the life of the numerous family. She will not cause unnecessary hassle in care and maintenance, but with her tiny size will become a wonderful watchman. Here is an interesting breed of Japanese Spitz. And did not you dream about that?

How to choose a parrot correctly?

How to tell a cat from a cat

Education of cats is not easy

How many times a day to feed the kitten? You need to know!

How to feed a cat without harm to health?

How to feed the cat properly?