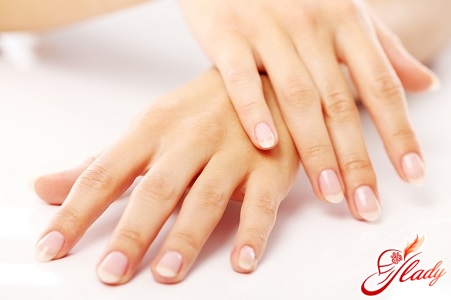 The fingernails are broken and broken? There is an opinion that this happens as a result of lack of calcium, or, perhaps, your body does not get vitamins in the amount necessary for it. But even more often the reason that the nails became brittle or began to break up is that we use various nail varnishes and means for removing these varnishes without any measures, and not all of these cosmetics are quality. Unfortunately, this problem is faced by a huge number of people, regardless of their age. Nails can break in both adults and children. Often, the nails of a babe break down - there is no question of any varnishes. So why such a problem exists? Of course, the main reason for problems with nails is really the situation when vitamins and trace elements become deficient in the human body. Especially it concerns such elements as vitamin D, zinc, silicon, calcium and amino acids. In the event that the reason for the brittleness of the nails is precisely the lack of microelements and proteins, the treatment of the layered nails should begin, first of all, with adjusting the diet. And then take vitamins, treat the nails, applying special means, and make various baths for the hands and nails. Most effectively eliminate the problem of products such as beef liver, fish (especially marine), dried fruits, all kinds of nuts, greens. In addition, doctors in such cases are advised to take special multivitamin and mineral complexes, which are designed to strengthen hair and nails. Accordingly, they are able to heal and foliation of nails. If problems with the separation of the nail plate begin in adults, the doctor can recommend using special tools that are applied not only to the skin of the hands, but also rubbed or applied to each nail - these are medical creams and varnishes: often their effect is very effective. Another cause of problems with the nails is the effect of various allergic factors. And such aggressive factors can be not only detergents, but even water of inadequate quality. By the way, it is the tap water that often causes the nails to begin to separate quite severely in young children. What to do in this case? In such cases, doctors recommend that parents boil water for a hygienic bath or at least defend it - this will help to avoid such problems. 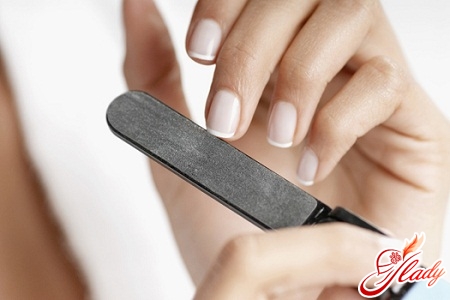 Often problems with brittleness, stratification of nailsand others are directly related to various violations of the internal organs and human systems - this in no case must be forgotten. This explains the recommendation of doctors at the first signs of problems with the nails to seek medical advice. And only after that, if the doctor does not reveal any diseases, the problem can be considered purely cosmetic. And if the disease is found, then it must be treated, not postponing. As a rule, an experienced doctor from one appearance of the nail plate will immediately be able to presume the presence of a particular disease and prescribe a more detailed examination. So:

In the event that the nail is frayed, and its coloringbecomes uneven - paler than skin color, or, even worse, more cyanotic - there is every reason to believe that a person has encountered some or other disturbances in the work of the cardiovascular system.

In the event that the nail plate is loose,thickens, and on it appear transverse in-depth strips, the doctor can suspect a person the existence of secretive infectious processes. Although this phenomenon often occurs after the recently transferred severe infectious diseases - in this case, the problem will eventually come to naught completely independently, and you will not have to do anything.

In the event that the nails began to separate, and afterthis on the nail plate there were longitudinal dents, most likely the doctor will assume that the sick person is eating extremely unbalanced, and will direct it to the doctor-nutritionist. The nutritionist will tell you what you need to do to correct the situation with malnutrition.

In the event that the nails are extremely loose,the doctor can assume that the patient has serious metabolic disorders. And such violations in any case should not be left without attention, since the layered nails are the very first alarm signal. If you do nothing, other violations will soon manifest themselves and even serious diseases will arise.

In the event that the brittleness and delamination of nailsaccompanied by the appearance of white spots, you can talk about a possible increase in blood sugar, often indicative of increased risk or even already begun diabetes. In this case, a blood test to determine the level of sugar is simply necessary so that the doctor can prescribe medications to fight a serious and rather serious illness.

In the same case, if arising on aThe nail plate spots are not white, but yellowish color, a person most likely needs a consultation with a pulmonologist, since these yellow spots may indicate that this or that lung disease has developed.

In the event that in addition to foliation nailplates on it appear small convex white dots, which in their appearance resemble a scattering of pearls, a doctor may suspect the presence of a sick person of any protracted viral infection that flows secretly.

In the event that the nascent laminagradually becomes concave, the doctor will by all means prescribe a blood test to a sick person. As a rule, in the majority of such cases, the foliation and brittle nails are caused by iron deficiency anemia. And after the patient has undergone the necessary treatment, the problem with the nails will be eliminated. 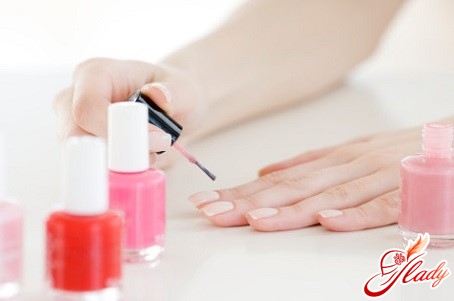 As already mentioned above, the foliation of nails more oftenall is not a cosmetic, but a medical problem. However, in no case should we forget that proper nail care, conducted in parallel with the treatment of the underlying disease, significantly increases its effectiveness. There are several simple rules that will help protect nails and reduce the aggressive impact on them of various external factors. The first and most important rule is to conduct all domestic work that requires prolonged contact with water or chemicals, protective gloves. We hope you understand why this rule should be strictly observed. Do not forget about nutrition of the nail plate and cuticle. Every time you wash hands, lubricate your hands with any nourishing cream. And at least once a week, the following procedure should be carried out: after doing all the household chores, just before bedtime, thoroughly clean the skin of your hands with liquid soap, pat the towel and allow to dry. After this, very abundantly apply either a moisturizing cream, or, in extreme cases, lubricate your hands with sunflower oil, placing a special emphasis on the nail plates. After that, put on your hands polyethylene gloves - such as are put in boxes with paint, and on top - cotton gloves, and go to bed. In the morning, the condition of your hands and nails will pleasantly surprise you. Seeing the result, you want to repeat this procedure more than once. Why not? Means for this need minimal, effort - and even less, and the result is simply stunning! Another good way to prevent nails from breaking and breaking is the simplest salt baths. Make such a bath is not at all difficult - heat five liters of water to a temperature that can be handled by the skin of hands, add two hundred grams of large table salt and twenty drops of ordinary iodine solution. Place the hands in the tub, making sure that the nails are completely covered with water. The duration of the bath should be at least twenty minutes. Repeat the procedure is necessary in about two to three days, and the course of treatment can be as long as it seems to you necessary. As a rule, if the treatment of increased fragility of nails is complex and consistent, even the weakest and brittle nails on the hands will very quickly become strong. And remember that such lucky ones, who got ideal nails from birth, are only one. But now, when you know why the nails can split up and how this problem can be solved, no one will prevent you from being beautiful! We advise you to read:

Anti-cellulite massage of the abdomen

Masks for the face at home