500 years of spaghetti birth - so peculiarItaly celebrated its national holiday literally a few years ago. How much this product exists, there are so many disputes in the world, who invented this miracle of cooking. His homeland is called and Mongolia, and China, and the Arab countries. But still the world recognition and real popularity deserved spaghetti in Italian. All Italians believe that pasta is good for health. And they are right, because our Russian pasta, noodles, vermicelli - everything that we call macaroni, they simply do not eat. Our pasta is made from soft wheat varieties and contains more starch than useful carbohydrates. Italian spaghetti is made from durum wheat. They have little starch and a lot of fiber, which very well removes all harmful and superfluous from the body. On the packs containing real spaghetti, it will be written "semolina di grano duro", which means that they are made from the "right" flour. 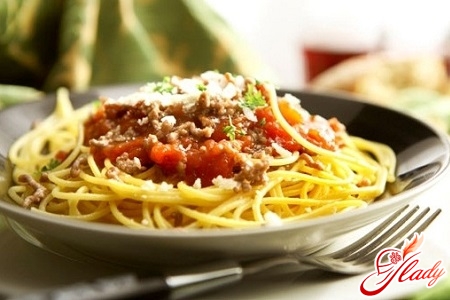 Italian spaghetti is a conceptrather wide. Italians have a huge number of ways to cook this dish. To really weld them the way it's done in Italy, you need to know a few simple rules. The main rule: spaghetti in no case can not be broken. Any Italian will tell you that such "blasphemy" is unacceptable, spaghetti is always cooked completely. Even if you do not have a wide pan at hand, you'll have to put them in boiling water gradually. When choosing pasta, Italians pay special attention to the fact that throughout their length there are no traces of unbroken flour, in the form of white dots, and, of course, that there is no scrap in the pack. The Italian housewives know that in order to make macaroni useful for digestion and not get fat, it is important not to digest them. The Italians are preparing all the spaghetti for a "tooth", leaving a little undercooked, because they know: they will definitely reach the full readiness in plates, already under sauce. In Italy, spaghetti is not to be washed with water. Do it the Italians specifically to their surface remained nonsmooth, so the pasta will be better "cling" the sauce. After cooking, they are shifted to a colander and wait for the water to drain, and then return it back to the pan or lay it in a deep or wide plate, depending on which recipe was chosen.

How to eat spaghetti

As well as to prepare, and there is a spaghetti it is necessary to be ablein Italian. Children who are just beginning to learn the art of eating a national product, give a fork and a spoon, with which they wind spaghetti on the fork. Adult Italians do not need a spoon, they wind the macaroni on the fork reasonably and without it. The most common mistake that occurs in tourists and beginners lovers of Italian cuisine - is trying to get as much macaroni as possible on a fork. The result is a big hankie that can not be eaten at a time, and, according to the Italians, tearing spaghetti is barbaric. In restaurants or formal receptions, where tables are too close to each other, it is better not to order spaghetti if you have not yet fully mastered the wisdom of their eating. There is a great chance to sprinkle sauce with a neighbor, and then a pleasant evening and mood will be spoiled both for him and for you. 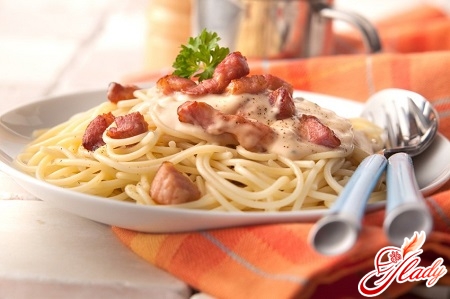 A few words about the "right" sauce

Spaghetti in Italian will not be a real dish,if you do not pick a sauce. Italians have many varieties of sauces, and almost every mistress has her own, a corporate recipe. There are classic, original sauces that support the traditions of this or that city of Italy. The Romans, for example, offer carbanara sauce, the inhabitants of the city of Naples prefer to serve tomato sauce with spaghetti. There is also garlic sauce, bolognese sauce and a huge number of others. The northern regions of Italy are preparing this dish with mushrooms, cheese, olives or minced meat. Southern coastal towns and villages like spaghetti with seafood. The only subtlety that you need to know: the consistency of the sauce should be uniform and should not be too thick. There are a lot of recipes for cooking this popular dish, and you can choose any recipe for yourself and your family. It should be added that in Russia this product is very popular. Virtually every hostess in the kitchen has in reserve a couple of packs of pasta. What in Russia is called pasta, in Italy is called pasta. Pastas there are hundreds of species. For example, our noodles - fettuccine, ears - orikiette, spirals - fusilia, horns - macaroni. And only one kind of pasta is called alike in both Italians and Russians - it's spaghetti! Prepare for your health and your pleasant appetite!

Domestic duck: the recipe for a hearty dish

Casserole potato with meat and mushrooms: bring variety to your menu!

Potatoes baked with cheese and mushrooms