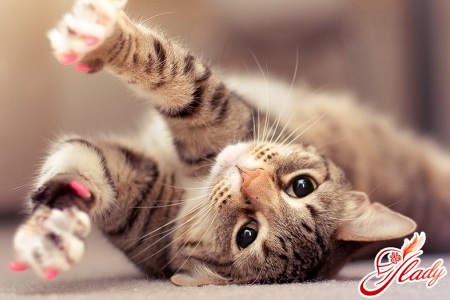 Having planted a cat in his house, a person condemned himself tothe tireless concern for this capricious, though quite independent, being. But the independence of the cat is relevant only when it comes to making decisions and ascertaining the primacy of man and animal. Here, the cat does not recognize the authorities. But when an animal suddenly becomes overwhelmed, then it is the person who is looking for help. However, the cat's ailments are not always heavy or dangerous. Sometimes a cat stoically suffers an ailment and is cured solely by its own vital resources. Often, the diseases of cats are asymptomatic, but sometimes even the most light and safe diseases have very frightening signs or not very pleasant manifestations. For example, dandruff in a cat. What is it, what is the evidence of this phenomenon and how dangerous is it? Let's figure it out.

Dandruff - a phenomenon that occurs in allwarm-blooded animals (in humans, including). Dandruff is a syndrome, that is, a cumulative set of symptoms (visible or perceived signs) with a common mechanism of the onset and development of the disease (pathogenesis). This syndrome is characterized by scaly exfoliation of skin particles. Moreover, this detachment occurs at high speed and for a long time. Most often dandruff appears on the skin, covered with abundant hair. Therefore, a person has dandruff on his head, and for the appearance of dandruff in cats, the "favorable" area is mainly the back. However, dandruff can also appear on any hairy area of ​​the cat's body. The process of dandruff is as follows. Skin cells are constantly regenerating, that is, they are being updated: new ones are formed and old ones die. As a rule, dandruff - dead scales - is always present in animals, but at a normal rate of renewal of skin cells of these scales is simply very small. However, with the accelerated cycle of replacing skin cells, the animal's hair (or human hair) becomes simply strewn with these dead scales. Then we see all the signs of dandruff. 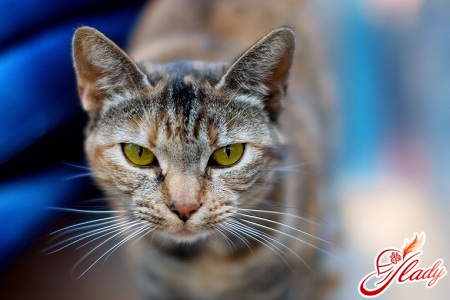 Dandruff looks different. Scales that fall from the animal's hair can have gray, yellow, brown, white and even black color (all depends on skin pigmentation). The size of dandruff can also be very, very different. For example, sometimes these scales are more like spilled non-wool flour, and sometimes they are like flakes, and dandruff can be dry or greasy to the touch. Frequently stuck together scales are generally able to form whole layers. The amount of dandruff is also different - from a few pieces to unthinkable volumes. A dandruff can affect both the entire surface of the skin of the animal, and only some areas. The number of flakes can also vary: from a few pieces to a huge number. Dandruff can cover the entire surface of the body or only some of its areas. In the first case, they speak of a generalized defeat, in the second case, of a localized one. In a word, the same diseases in different animals can cause different dandruff. But do not think that the accelerated renewal of skin cells and, as a consequence, the appearance of numerous light or dark scales in the coat is the only sign of dandruff in cats. In addition to this symptom, signs of dandruff can be:

Unfortunately, similar signs can accompanyand various diseases: fungal lesions of the skin and wool, infection of the animal with parasites (fleas, withers), dermatitis, allergic reactions. By the way, some diseases can also cause dandruff in cats. And it should be noted that dandruff is most often a direct consequence of any disturbances in the animal's body. 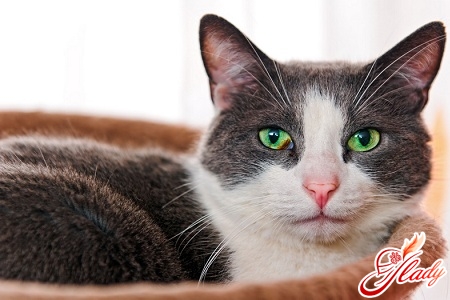 The appearance of dandruff - the first signal about problems withhealth of the animal or about violations of hygiene and maintenance rules. A healthy and well-groomed cat has an even, shiny and thick coat (if it's not about bald breeds). But even with this condition of the fur, the dandruff that appears shows the owner that the cat is not all right. Therefore, the owner of the animal must find out the reason for its appearance. And the reasons can be different.

So, if your cat or cat has appeareddandruff, be sure to find out the reason. First of all, examine the animal in a veterinary clinic. If any diseases are found during the examination, it is possible that their treatment and recovery of the cat will lead to the disappearance of dandruff. But if the animal is healthy, then look for the cause in another. In this case, most likely, the cause of dandruff was stress, poor nutrition or illiterate care. And only your attention and participation will help the animal get rid of this misfortune. By itself, dandruff will not work. We advise you to read: