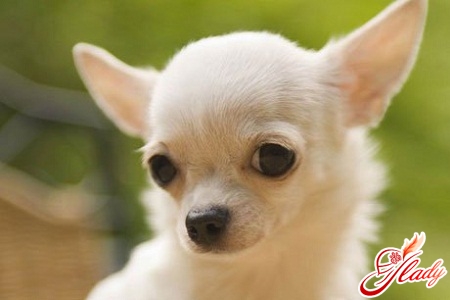 Chihuahua dogs are one of the oldestrepresentatives of the canine world. These charming creatures with large eyes, large ears and a miniature body, despite their ridiculous size, have a truly daring character and are not afraid of anything. This breed has won world popularity and the chihuahua among the decorative dogs occupy their special place. The Chihuahua dogs have always been favorites of older breeders, but at present this breed is popular among many people of different age groups. Characteristics of the nature of this breed make it a real find for some people and at the same time with it the most inappropriate option for others. 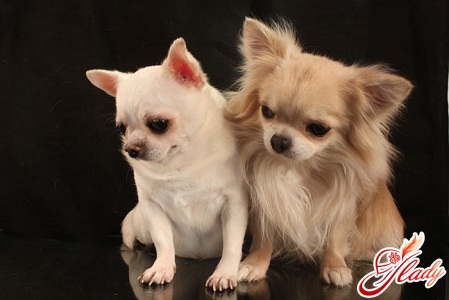 Till now all over the world there is a heated debate about thethe origin of this ancient breed, and its history is full of all kinds of legends, secrets and myths. Among the most basic versions about the native land of the chihuahua, three most common ones can be distinguished. According to one of them, the "roots" of Chihuahua are in Europe, on the second they have an eastern footprint and originate in China, but most scientists still claim that this breed is due to origin in North America. And the name of this group of miniature dogs received in honor of one of the northwestern states of Mexico, which is called Chihuahua. In the 1800s, chihuahua was brought to Europe by travelers from trips to the southern parts of North America and immediately gained immense popularity due to its unprecedented "portability". It should also be noted that the peak of popularity of this breed of miniature dogs became the 1960s - the times of the Cold War and the Cuban Crisis. And in 1959 Fidel Castro presented the leader of the USSR Nikita Sergeyevich Khrushchev as a sign of friendship between the peoples of two long-haired Chihuahua. These two little heroes named Duke and Duchess became the first representatives of this breed in Russia. In the fall of 1997, the world-famous chain of Mexican eateries Taco Bell made the chihuahua dog the center of its advertising company and used it as a mascot of happiness for a person. Huge success, this advertising has led to an increase in the popularity of the network itself, and at the same time to an increase in the demand for chihuahua puppies. For the last ten years, the popularity of the oldest variety of miniature dogs has grown many times, and the little hero of this advertising company has been given the nickname Taco Bell dog (dog Tako Bel).

Chihuahua - the perfect companion and friend 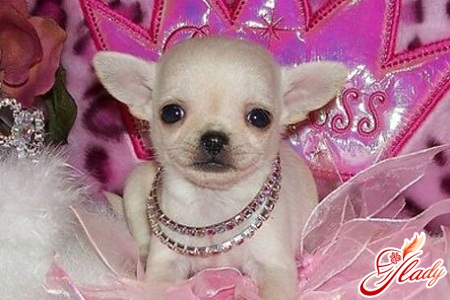 Chihuahua are considered the smallest dogs inworld, one of them was even included in the Guinness Book of Records because of its very ridiculous weight - 490 grams. The norm for these general favorites is the weight of 1-3 kg, and their height at the withers is usually 15-23 cm. There are two main varieties of this breed - long-haired and smooth-haired dogs. Longhaired chihuahua has a long, straight or wavy, but not curly or thick coat. In smooth-haired miniature representatives of this breed - tightly adhering to the body hair, soft and silky to the touch, which has a characteristic shine in directional light. Each of these types of Chihuahua has a whole palette of various shades of wool, both monochrome and combined with stains and marks on the white background color. Despite its tiny size, the chihuahua dog has a very strong physique and extraordinary liveliness and fearlessness. These babies are used to expressing their love and affection for the owners, and this gives them special joy. Chihuahua is unusually proud and active, and without proper upbringing can be very stubborn and unbearable. With some representatives of this breed, there may be slight difficulties in their training, but they can be easily overcome by the exceptional intelligence and ingenuity of these dogs. The breed of chihuahua dogs does not tolerate the cold very well, so she will be very grateful to you for the warm sweater worn in advance before the walk. In principle, these decorative babies may well have enough motor activity inside the apartment. This is especially convenient for those people who do not have the constant ability to periodically walk the dog. Chihuahua will become a perfect companion for city dwellers, since it can be taken almost everywhere. Dogs of this breed, as a rule, are vigilant, active and attentive, that is, they have distinctive features of terriers. They love all household members, but, nevertheless, each of them singles out for himself only one master and it is to him that she is especially devoted. This breed has extraordinary endurance and excellent health, and the average life expectancy is about 15 years.

How to accustom an adult cat to the tray?