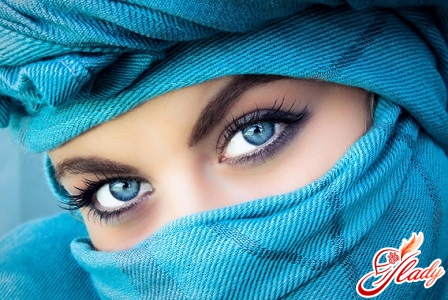 Care for eyelashes is just as important as caring forhair or skin. Daily application of mascara along with the habit of not taking off make-up for the night, the use of various tools for stretching and curling eyelashes - all this makes them brittle, thin and eventually leads to loss. Even girls who advertise mascara often have quite big problems, sometimes even loss of eyelashes, because of the constant need to use cosmetics. Seductively curved, thick eyelashes in commercials - nothing more than a common deception. There are folk remedies that allow you to return eyelashes health and strength, while not spending much time and money. To care for the problem eyelashes and their growth, it is sufficient to use conventional castor oil, also called castor oil.

Castor oil: what it consists of

Castor oil is obtained from castor seeds. These seeds are poisonous enough, but in ancient medicine castor oil was used inside as a laxative. Traditional medicine provides this remedy with cleansing, restoring and bleaching properties, it is recommended to remove papillomas, warts, pigment spots and treat a number of serious diseases. Externally, castor oil is a viscous yellowish liquid. Its composition contains many useful acids. It is also worth noting that castor oil is useful only when it was obtained by cold pressing. It is this oil that should be used in cosmetic procedures, otherwise it does not have moisturizing and nutritional properties. It is worth noting that, before using castor oil, you need to test for individual intolerance. It is advisable to do it on a sensitive area of ​​the skin, for example, on the inside of the elbow bend. Redness and itching will tell about the high sensitivity of the skin to this remedy, and its use in this case is better to abandon and apply for the growth and strengthening of eyelashes other folk remedies. Because of what is castor oil is consideredthe best for regular eyelash care? The reason lies in its chemical composition. In this oil, each component works to make the eyelashes beautiful and healthy:

Given the complex impact thatgives castor oil, it becomes clear why it is considered the best. The effect of other oils may not be so effective, since they can act not on those functions that are important for the normal growth of eyelashes. Of course, castor oil for the growth of eyelashes can be combined with other ingredients, but it still remains the best.

How to use castor oil

Buying a castor oil to be usedfor the growth of eyelashes, you need to understand that it can not be applied with fingers, and even without removing the makeup before the procedure. For brush casting, the brush from the carcass is the best. Before use, this brush should be thoroughly rinsed, so that it does not have the remains of an old carcass. Of course, castor oil can be bought in a flacon with a special brush, which is designed for this procedure. After dipping the brush into the bottle, you need to hold it several times along the entire length of the eyelashes - just like during the application of the carcass. Applying 2-3 layers, you need to gently wipe the eye with a tissue or cotton pad to remove excess. It is best to do this procedure in the evening, before going to bed, and in the morning, thoroughly rinse the eyes with water or remove the remnants of castor oil with the help of some good means for removing makeup. Castor oil is best used several times a week, while it can be applied to the skin of the eyelids along the line of eyelash growth. The first results with the systematic application of this product can be seen in a couple of weeks - the eyelashes will become much longer and thicker. And in a month it will no longer be necessary to paint them with mascara, since they will be very long and beautiful. After the castor oil has been applied to the eyelashes, do not stress them: you can not go out into the street under the scorching sun or the wind, you do not need to smoke, pouring them harmful nicotine, you do not need to cook food in the kitchen. If these rules are not observed, the effect of using castor oil can be completely lost. It is possible that neutral and negative reviews of castor oil, which was used to grow and strengthen hair, eyebrows and eyelashes, are due to these factors.

Mask from acne at home

Ingrown hair on the legs: how to quickly and reliably get rid of the problem

How to remove the second chin