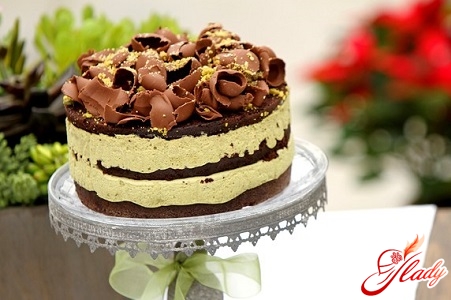 Shokomany, triumph! For today we will master the recipe for a delicious delicacy. We will learn how to cook chocolate nut cake! However, this prospect will not only attract chocolate lovers, but also fans of homemade cakes, muffins and cakes. And we invite those who do not know how to bake to join us, but they are not averse to pampering themselves and their relatives with homemade cakes. Yes Yes! Chocolate cake with nuts, we will not only bake, but also prepare in a cold way. How do you like this prospect? And if you are ready to create a masterpiece of home confectionery art, then stock up on chocolate and nuts, choose a recipe and embark on culinary magic.

Let's start with traditional English cuisine. Well, if the housewives of the foggy Albion have mastered the recipe for this chocolate cake with nuts, then we, too, can do it. And the recipe is actually very simple. Ingredients:

Preparation: We give the oil a little to melt it and put it in a bowl. Then we break eggs there, add sugar, vanilla sugar and salt. Now take the mixer and whisk it all at high speed for about five minutes. Next, we begin to gently mix the cocoa powder (already without a mixer), chopped nuts and bitter chocolate into the whipped mass. At the very end, pour the sifted flour and baking powder. Ready dough should be a consistency of thick sour cream. Turn on the oven and let it warm up to 180 degrees. In the meantime, grease the baking dish with vegetable oil and pour the dough into it. We send the form to the oven and bake the walnut-chocolate cake to the test on a dry toothpick. On average, it takes from half an hour to forty minutes. But the exact time of baking depends on the oven. We can cool the finished cake without removing it from the mold, and then extract it and cut it into three equal layers. And while it cools, you can make a cream. To do this, the butter is removed in advance from the refrigerator, cut into cubes and put into a bowl or in a saucepan. When the oil becomes soft, lightly beat it with a mixer or whisk, and then continue whipping, pouring in condensed milk. Milk is injected into parts, approximately one tablespoon. At the end of whipping, pour into the cream a tablespoon of cognac. We collect the cake, sandwich the cream of the cake and cover it with the top and sides. If desired, you can decorate the cake at your discretion or simply sprinkle it with a mixture of crushed nuts and grated chocolate. 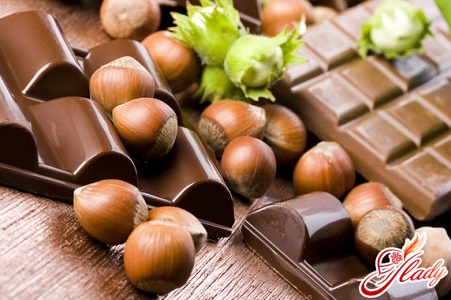 The name of this legendary cook is known,perhaps, all. He became famous not only for the elegant recipes, but also for the original ways of cooking the most usual and familiar dishes. That's the recipe for the chocolate cake he has. So, prepare a chocolate nut cake from Jamie Oliver. Ingredients:

Preparation: Almond for the cake we need blanched and peeled. If this is not the case, then put the raw nuts for a few seconds in boiling water, and then remove the skin from them. Hazelnut, too, must be pre-roasted and freed from the peel. Then the nuts must be ground in a blender or in a combine. When the nuts turn into crumbs, add to them broken into pieces chocolate bars, a teaspoon (with a slide) of cocoa powder and continue to shake for another thirty seconds. Now put in a bowl of softened butter, pour out the same sugar and whisk together. We divide the eggs into yolks and proteins and remove the proteins in the refrigerator. Yolks one by one are introduced into the oil-sugar mass, continuing to whisk it. At the end, add the nut-chocolate mixture and knead the dough. Now whisk in a strong, stable foam of protein with salt and gently, for one tablespoon we put them into the dough. Now turn on the oven and let it heat up to 190 degrees. Form for baking abundantly grease with butter and sprinkle with flour, and then pour the dough into it. Bake the cake for about an hour. Ready to test the sample on a dry toothpick. Look for the nut chocolate cake, let it cool, without taking it out of the mold. Then we extract it, shift it to a dish and serve it with cream ice cream.

For completeness, we offer you an antique andfamous recipe for Austro-Hungarian cuisine. We will notice that the real recipe of this cake is kept in the strictest secrecy, however there are many variations on a theme of the legendary cake "Esterhazy". And here's one of them. Ingredients:

Preparation: Walnuts first crushed to the state of crumbs, dried them in the oven, and then in a blender grind into flour. Pre-cooled egg whites are mixed with salt and beat into a thick, thick foam. Then we start to inject sugar protein into the protein mass, whipping continues. We put the sugar in small portions, and whisk the proteins to a stable smooth mass, which will not fall out from the upside-down pan. On a tablespoon, add the nut flour to the whipped proteins, add cinnamon and wheat flour and knead the dough. On parchment paper, laid out on a baking sheet, draw circles about 24 centimeters in diameter and spread a thin layer of dough on them. Bake cakes in a preheated to 150 degree oven to a light brown color for 20 minutes. We remove the cakes from the baking tray still warm. Now we are preparing the cream for the cake. To do this, carefully mix cow and coconut milk and cast the third part of the mixture. We connect it with granulated sugar, vanilla sugar and egg yolks and beat into a homogeneous mass. The rest of the milk we put on the fire, we give it a boil, and then, with constant stirring, pour into it a milk-yolk sweet mixture. As soon as the brewed mass boils, remove it from the heat and cool it. From the softened butter and boiled condensed milk, we prepare the cream. First, lightly beat the butter, then continue to whisk it, adding the condensed milk and the cooled custard mass, which we put in pieces. At the end of whipping on a tablespoon, pour in the cherry liqueur. We cool the cream and collect the cake, folding the cakes with a pile and sandwiching them with cream. The topmost cake is greased with a very thin layer of apricot jam and covered with a glaze of white chocolate. To do this, fill the chocolate with hot cream and dissolve in a water bath or in a microwave oven. Then melt the bitter chocolate, put it into the confectioner's bag and draw a spiral, starting from the center of the cake and laying the coils of the spiral to its edge. Then take the knife and gently hold it on the top of the cake, dividing it into eight segments. At the same time, the drawn spiral is as if reaching for a knife, and as a result, a traditional cake "Esterhazy" will appear in the form of a web. First, draw segments from the center to the edges, and between them there are as many segments drawn in the opposite direction. We sprinkle the sides of the cake with almond petals and remove it in the refrigerator for 8-12 hours.

And here is the promised recipe, by which you canto cook a chocolate nut cake without baking. Note that the recipe can be used as a basic and supplement it with other ingredients, diluting the taste of the cake with fruits, candied fruits, marmalade and other goodies. Ingredients:

Preparation: Put the nuts on a baking tray and dry in the oven at a temperature of about 200 degrees for about five minutes. Then we clean them from the husk, simply laying on the towel and rubbing the palms. Peeled nuts are crushed into a crumb. Now take any suitable form for baking or even an ordinary salad bowl and cover it with food film. Then we spread the bottom and sides of this form with a biscuit moistened in a liqueur. Next, take half of the prepared bitter chocolate and dissolve it in a water bath. The second half is broken in small pieces. Cream whisked with powdered sugar in a lush mass (you can take ready-made whipped cream) and combine it with pieces of chocolate and chopped nuts. The resulting mass is also divided into two halves and in one part we fill the form with the biscuits. In the second part we introduce melted chocolate and also put it into the mold. The top of the cake is covered with a layer of cookies soaked in a liqueur. Cover the form with the cake with a food film and put the refrigerator in the refrigerator for 12 hours. Take the well-cooled cake carefully from the mold and decorate it with chocolate chips. Here is a parade of recipes! Choose what you like best and prepare a deliciously nutty chocolate cake. Prepare with pleasure and pleasant appetite to you!

Gingerbread cake: a miracle created in a few minutes

Chocolate cake with nuts: the best combination of taste

Chocolate cream for cake. How to cook properly?

Cake with sour cream and condensed milk: surprise the family with wonderful pastries

Cake from cookies and sour cream: a quick way to prepare a delicious dessert