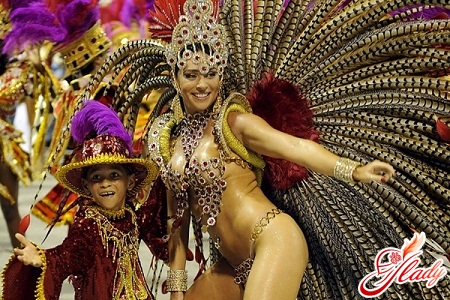 What only people do in an attempt to escape fromthe greyness of everyday life! Someone goes on a trip to exotic countries, someone masteres extreme sports. However, such occupations may not be available to everyone for various reasons. And quite desperate, shrugging their shoulders, lay on the sofa in front of the "blue screen" TV, trying to get away with the head in contemplation of someone else's fun. Not a very attractive prospect, is it? And why not try to take part in any celebration or carnival procession? The choice depends on the time of the year, and it is huge in the scale of the planet. Perhaps, the richest for the numerous holidays and carnivals can be considered February. At the end of February or beginning of March, a wave of carnivals rolled around the world. Then you and the Venetian carnival with magnificent masks, more like works of art, and carnival in Dusseldorf, by the way - the longest in the world, with its eccentricities and comic processions. And the Goan carnival, with the three-day reign of King Mom. And the carnival of Mardi Gras is the coveted dream of gourmets and hedonists around the world. But the most brilliant and the most crazy with the full right to call the Brazilian carnival. Exotic mixture of European sophistication and primitive passion of the peoples of Africa, conquering and infecting with its fun. 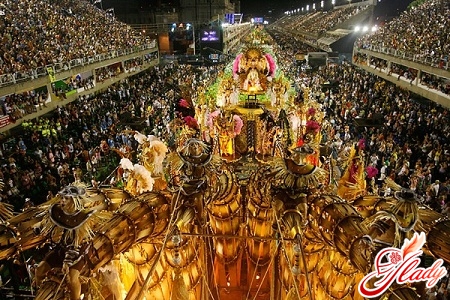 To this day, hot discussions have not subsided,where does the Brazilian carnival originate? Many are sure that the beginning of the well-known in his time in Portugal "amusing processions." These days it was customary to make fun of each other, pour passers-by with water, "shell" with balls of paint, eggs, beans and flour. The girls from the balconies of the houses were tagged with improvised shells directly into the heads of the guys they liked. And the "victim" of the exact hit did not take offense, on the contrary - it was perceived as a kind of flirtation and flirtation. And it could serve as a basis for a closer acquaintance. There is an opinion that the basis of the carnival served as pagan dances, when colorful processions passed through the streets of big and small cities. By the way, the tradition to decorate themselves with bright feathers originates in these dances. Of course, the church condemned the elements of paganism, inherent in such popular festivities, but over time, as in the case of Russian carnival, even timed these festivities to the last days before Lent. But the Brazilians would not have been Brazilians, if they had not included in the carnival inherent only in this country nuances. The history of the Brazilian carnival in the form in which it appears annually to numerous participants and guests, dates back to 1916, when the first samba, which became the main attribute of the carnival, was written specially for the festive procession. Already in 1928 the first samba schools appeared. And exactly in four years the Brazilian carnival became a place of competition of all these schools. And despite the fact that the carnival in Brazil is young enough, it is with the pressure, inherent only to temperamental Brazilians, captures and conquers the numerous hearts of true connoisseurs of holidays. 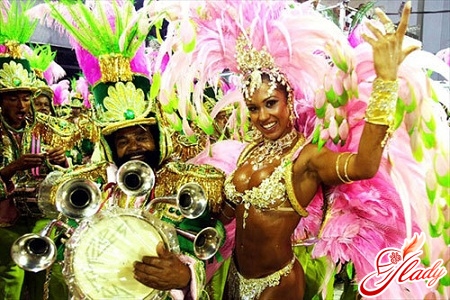 In ecstasy of incendiary rhythm

Rio de Janeiro is the dream city of Ostap Bender. In the days of carnival, his air is somehow electrified. It seems that small sparks run over the skin, or an injection of adrenaline is injected into the blood. Another second, and the holiday will fall by a wave of tsunamis, forcing to choke with universal happiness and merriment. Within a week life in Rio is subordinated to a single rhythm - the rhythm of samba. On numerous streets of the city there is no place for cars and motorcycles. Only half-naked people dancing right in the middle of multi-lane roads. Temperamental Brazilians know a lot about fun, not for nothing that the African, European and Indian traditions were intertwined in the culture of this country in an intricate way. For five days numerous samba schools compete among themselves in the art of performing dances, colorful costumes and design of special platforms. Center Rio, avenida Marquise Sapukai, where sambadrome is located - the alley width of thirteen meters and a length of seven hundred meters, turns into an open-air theater. This avenue was designed in 1984 specifically for carnivals. The hearts of the seventy thousand spectators in the stands beat in a single rhythm. Famous samba schools should show their skills in all their glory. For a strictly defined time they must pass through the sambadrome, performing dance steps. Several thousand people take part in the performance at the same time. By the way, the carnival in Rio de Janeiro is a democratic phenomenon, and it does not matter where the samba school is located. It can be a school from the prestigious district - Grande Rio or from the favela - Rocinha; everyone has the opportunity to become the best of the best. The official part of the carnival begins with the transfer of symbolic keys from the city to the "king of carnival". He is given the symbolic right to issue and repeal any laws throughout the time of the carnival. However, the main law of these days sounds quite unambiguous - to have fun! And he enthusiastically obeys both natives and numerous tourists who came specially to look at this costumed competition of dancers. And the bravest decide to join. Having paid only $ 600, anyone can become part of the procession of one of the samba schools. The peak of the carnival is on Sunday and Monday, when the platform on the sambadrome is occupied by platforms representing the big leagues - the fourteen best schools in Brazil. Sounds the hymn of the Brazilian carnival - march "Spread the wings", written back in 1899 by the composer Shkinya Gonzaga. And the competition starts invisible to the outward eye. Why invisible? It's very simple: looking at this incendiary act, on the beautiful and hypnotic movements of dancers, it is impossible to believe that every movement, every smile and every look was rehearsed for a year. A strict jury, following the carnival procession, closely follows the slightest inaccuracy in the figure of the dance. A lumen in a column of marchers or sagging in the storyline can lead to the fact that precious points will be lifted, and the dance school next year will be forced to look for new sponsors. 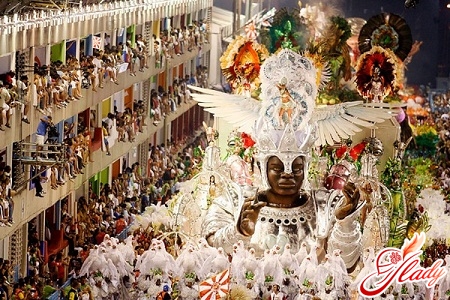 Feathers and rhinestones, or a masterpiece for one night

Undoubtedly, when mentioning a word combination"Brazilian carnival" in the mind clearly outlines a fantastic costume, consisting of feathers and small pieces of cloth, decorated with rhinestones and glitter. After all, his main task is to emphasize the beautiful, well-trained body of the dancer, to distinguish him in the crowd and to designate the main theme of the holiday. Thus, the costumes at the Brazilian carnival are becoming full participants of the holiday. Each year, each of the hundreds of samba schools names a theme, or "enredo" in Portuguese, on which the dance composition is based. So, and the design of the dance platform and carnival costumes should exactly match and reveal the marked theme. Chic, hand-embroidered with beads, beads and shells, costumes cost a lot of money. Designers specially design the carnival costume, trying to outdo each other. After all, this is their competition. Each pattern, every accessory of a carnival costume has its own significance. And this is no accident, since the tradition of wearing high headdresses decorated with feathers, came to Brazil from Africa. Each such head-piece is a talking, that is, bearing a certain meaning. As well as embroidery, inherited from the tribes of the Indians. Weigh such suits sometimes very much, up to fifty kilograms, and a fragile girl standing on the platform, you also need to dance, and so that no one sees the tension. And so the suit's convenience becomes one of the main criteria. Sometimes a part of the carnival costume can become a body art. The authorities of Rio de Janeiro have forbidden dancers to act naked, but incendiary samba is most convenient for dancing at the minimum of clothes. And in order not to violate the laws, but at the same time not to bind the beautiful bodies with numerous clothes, the dancers resort to tricks and apply "ritual" drawings to the bodies. Strangely enough, but these small and not very (the height of some costumes reaches five meters) masterpieces do not store after the carnival as a props, which can come in handy in some play. They are simply ... thrown out. Despite the fact that many participants sell cars to sew themselves a decent carnival costume. And this is due not to the difficulties of storage. Like many other things, the Brazilians this action carries a deep symbolic meaning. Since the carnival in Brazil precedes the Great Post, farewell to costumes means farewell to everything carnal and low-ground, the so-called farewell to the flesh. Although some costumes are still honored to be preserved. Most often these are costumes-winners. They are stored in special rooms. And put on various shows and enchanting activities.

Waiting for the dawn

To endure the night of dances, songs, even simplewaving his arms is not so easy. Overwhelming emotions, eyes run out, it is simply impossible to decide where to look: on sambadrome, where the main action takes place, or on the stands, where spectators no less incendiaryly dance. Sometimes their dances can compete with dance professionals. The Brazilian carnival ends at dawn. And with the first rays of the sun exhausted, but, undoubtedly, received a real feeling of the holiday, spectators on snow-white buses leave sambadrome. Each of them carries with them an incomparable charge of positive emotions. And a piece of real Brazilian passion.

Surprise my husband on his birthday: how to please a birthday boy?

Gift for 18 years old girlfriend: we give only the best!

March 8: The history of the holiday

Gifts for March 8 colleagues: the best sign of attention

What to give to colleagues on February 23: include imagination