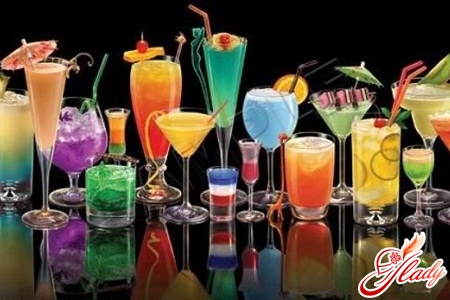 No holiday in our life can not do withoutalcoholic beverages. And no matter how much doctors say, that "drinking - health harm", alcohol from this phrase is no longer. It can be purchased at a grocery store, in a pharmacy and even in the economic departments, with the inscription "cleaning agent" !? Of course, not everyone is like rampant drunkenness and buy inappropriate drinks for oral intake. Not everyone…. You can even say that Russian people still know the measure and try to acquire quality vodka, a cognac of long-standing aging, or expensive fragrant wine. Varieties of alcoholic beverages have long crossed that border, when several bottles of cheap Port wine stood alone on the shelves of the shops. Now, if you want, we can try real French wine, American whiskey, English scotch, and the most mysterious of all drinks in the world is absinthe. In this article we will talk specifically about him and learn how to drink absinthe correctly. No other alcohol is associated with so many puzzles, myths, and rumors. And no other drink has won so many well-known admirers - Van Gogh, Hemingway, Picasso - these great people were known as avid absinthe fans, as they were called absinthists. And to understand all the secrets of this drink you need to go a little deeper into its history.

How it all began

Absinthe ... Its predecessor is wormwoodtincture, which was used as a medicine by the ancient Greeks. In 1792, a man named Pier Ordière, wrote a recipe for absinthe, thereby becoming his discoverer. From the very beginning of its existence, this drink was used only for medical purposes, was considered a panacea for all diseases, and was called the "Green Fairy". They treated people with poor appetite, as well as with problems of digestion. As an alcoholic drink, absinthe became known all in the same XVIII century, it was made from wormwood tincture and alcohol, adding other herbs. The tincture was distilled in a special distillation cube. Since then, the taste and aroma of the drink has not changed at all - it has a bitter aftertaste and a strong aroma of wormwood and anise. The beginning of industrial production of absinthe happened in 1797, when the relative of the absinthe creator Henry-Louis Pernod opened the first factory for its production. Absinth was best received in France. At that time, the French used the drink and not for its intended purpose: it was used as a preventive agent for wounds and tropical diseases in the French army. This was relevant, as France waged war with the tribes of North Africa. Years passed, and by the beginning of the XIX century, absinthe gradually began to gain popularity in other countries, and soon won fame in the upper strata of society, received the name "beverage of bohemia." His admirers were writers and poets, who in their works often mentioned absinthe - how to drink, when to drink, and what to drink. Artists and sculptors also did not deprive of attention a bohemian drink, for example Picasso, performed a bronze sculpture and called it "Glass of Absinthe".

With the onset of XX century absinthe began to fall intodisfavor. Gradually there was an opinion that excessive consumption of this drink affects people's mental health, and those who do not know how to drink absinthe inevitably will earn a nervous breakdown or, worse, incurable alcoholism. The sale and production of the drink began to be stopped, and in many European countries it was banned altogether. Indeed, doctors who observed people who consumed absinthe in large quantities confirmed that the drink leads to hallucinations and, as a consequence, the development of schizophrenia. So, for example, a farmer Jean Lanfrey, under the influence of absinthe and other alcohol, shot his family. In the emergence of this disease, thujone was accused - an etheric substance contained in absinthe. However, eventually came to the conclusion that this statement is fundamentally wrong. It turns out that the harm to the body was brought not by thujone, but by the poor quality of the alcohol used to create the drink and, of course, its excessive strength - absinthe contained almost 72 percent of alcohol. The ban on the production and consumption of absinthe in the EU countries was lifted only in 1981. It is worth noting that Switzerland - the birthplace of this drink - lifted the restriction only at the beginning of the 21st century, but with one condition - the content of thujone in the drink should not exceed a certain norm.

Let's return to the present

Modern absinthe has all the same 70 degreesstrength, but in its production use alcohol and other ingredients of high quality. Of course, this does not mean that you can drink it without thinking about the doses. Any alcohol in large quantities will not bring you to the good. Modern absinthe can be yellow, transparent, brown, red, but most often this drink is light emerald color. Before drinking absinthe it is diluted with water, and from this it becomes turbid, acquiring a slightly "unappetizing" appearance. The absinthe grades are significantly different in quality. The best and most expensive drink is made from grape alcohol, the sorts are cheaper include ordinary alcohol with the wormwood soaked in it, the most inexpensive is absinthe, made from alcohol with the addition of the necessary extracts. On sale there are also fakes, proudly called themselves absinthe. You can recognize the fake by the strength of the drink. There is an absinthe with a strength of 55 degrees. It's just a sweetened wormwood tincture that does not contain essential oils and has nothing to do with real absinthe. And yet this drink, in comparison with vodka, is easy to drink. This is his only advantage. Going to try absinthe it's better not to spare money and buy a good drink of a well-known manufacturer, because health, as you know, is more expensive than any money. 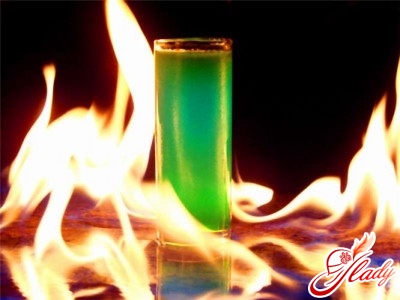 How to drink absinthe properly

So, you decided to try the most mysteriousalcoholic beverage in the world? If this happens in the company, first you need to learn a few rules and understand how to drink absinthe properly, so as not to get trapped in front of knowledgeable people. To begin with, note for yourself that absinthe is a rather bitter drink, especially in industrial production. Of course, you can make absinthe yourself, then it will be more pleasant to the taste, but this is a rather complicated procedure that requires certain skills, skills, and the availability of special instruments. With traditional use, absinthe is added with cold water. It is poured into a glass through a special hole in the hole, on which is a piece of sugar. Sugar slightly kills bitterness, and the use of the drink becomes more pleasant. The most correct percentage solution for diluting absinthe is 1: 5, that is one part of the drink and five parts of water. To completely get rid of the taste of bitterness in your mouth helps a slice of lemon. The real effect of absinthe is not at all like intoxication. Everyone feels it differently. Someone just relaxes, someone on the contrary can turn mountains. Some people feel unbearable happiness, and the smile does not come off their faces. Very much depends on the mood of a person and his personality. Therefore, before you drink absinthe discard all the tension, calm down, and tune into a good rest.

The way that came to us from France - fromtraditional only differs by the proportions of water. We pour one part of absinthe into the glass, take a special spoon, on which we put sugar and pour out three parts of cold water. The Czech way completely excludes the addition of water. It is necessary to heat the spoon and, putting a cube of sugar on it, pour absinthe. The result is a cocktail of melted sugar and a drink. This cocktail is drunk slightly warm. There is also a Russian way of using absinthe. Separately, sugar syrup is prepared and diluted with a drink in the right proportion. This cocktail best softens the taste of absinthe. Drink can and not be diluted, only before you drink absinthe in pure form, it must be strongly cooled. A pure drink is drunk in small doses, approximately 30 grams.

Can absinthe be dangerous?

As mentioned above, absinthe isthujone, a substance contained in wormwood. In large quantities, this substance can become a dangerous drug. Even at the time of absinthe, scientists conducted experiments, in connection with which it became clear that in some people the use of this drink can cause an epileptic fit, severe nervous system disorders, seizures, and other unpleasant things. Some doctors claimed that absinthe is addictive, comparable to heroin addiction, and even the process of its preparation is somewhat similar to the introduction of heroin intravenously. However, most of these statements occurred at a time when science has not yet reached its present heights. Yes, and the reputation of absinthe in many respects evolved from reports of famous people who used it. Maybe they did not know how to drink absinthe correctly, or maybe they were just mentally unbalanced people. After all, being famous is not easy! For example, there is speculation that Vincent Van Gogh, under the influence of absinthe, cut off his ear, but at the same time if you study the artist's life, you can find information that in his family a mental disorder was inherited. And he drank not only absinthe, he quite heavily abused and other alcohol, and once even tried to drink turpentine. All this makes us, modern people, look at these statements more or less skeptical. Is it true that absinthe is a drug, after all, you ask? Yes and no. Everything depends on the "fullness of the filled glass". Therefore, to drink or not to drink - it's up to you. The main thing is to know how to drink absinthe correctly and remember what you need to know in every way, do not overdo it with its use. After all, no one can know how your body will react to a fair amount of this drink.