In search of unusual sensations, new impressions andplaces where the human foot has not set foot, restless and inquisitive tourists are traveling around the globe. And any of them will tell you that the most boring thing in traveling is staying in a hotel. Temporary havens are very different, their features range from ascetic restraint to almost fanciful luxury. But luxury and a high level of service is not what anyone can surprise today. For those who prefer not only to travel to interesting places, but also to live in an environment of unusual interiors, and there are unusual hotels in the world. That's where the imagination of designers and decorators got carte blanche. And most importantly, they realized it so virtuously that each of these hotels in itself became a tourist attraction. There is even such a category of travelers who arrange themselves tours to unusual hotels of the world. They take long hours to fly and book rooms long before the start of the trip. Those wishing to become for a few hours or days inhabitants of this Hobbit burrow or prisoners in a real prison cell are surprisingly many. And such hotels are not only not great, but they are also very popular. Here, even fabulously high prices for accommodation can not be stopped. But if you still decided to travel and chose for yourself just such an unusual hotel, this article is for you.

Who among us did not read in childhood as adventuresFrodo Torbins! Would you like to spend a few days in one of the Hobbit mink? If so, then to you in North Patagonia, or rather - in Chile. It is there that the Magic Mountain Lodge is located, as if stepped into the reality right from the pages of Tolkien's book The Lord of the Rings: small windows with white curtains and ivy-covered small rocky hill. But this is just an appearance. You do not have to live in the caves cut in the rock. Simply from the side, this hotel looks like a real mountain. And in fact in this mountain there are 13 cozy rooms with all amenities. True, you can believe in this only when you are inside. If Chile is too far for you, then in Europe there are similar hotels, living in itself can turn into an adventure. 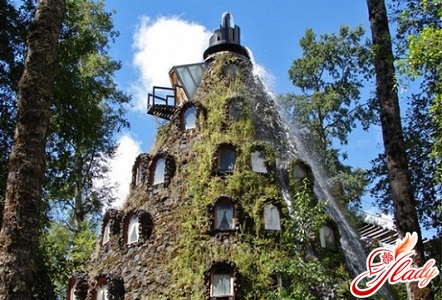 Just imagine this possibility: having crossed the threshold of a hotel in France, instantly to be in America. Do you think these are tales? Then welcome to Airstream! This hotel consists of several wagon cabins that traveled around America in the fifties. Everything, from music to the smallest details of the interior, reminds America of the middle of the last century. Small gardens, broken by every van, baubles - all this is real and was collected by interior designers throughout America. So, the feeling that you stepped not only to another continent, but also to another century, so complete, without the false and false sense of contortion, that it might seem that somewhere you have passed through a temporary hole. 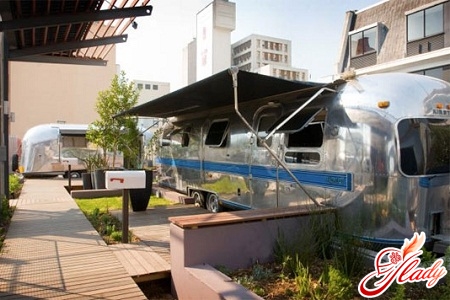 Feeling that from the usual Swedish house witha tiled roof, a dream of a respectable Swede, you are in a parallel world, or more precisely - in an underwater, visit you at the hotel "Utter Inn". This hotel-house is right on the water and, going down the hatch in the floor on the stairs, you will fall into the bedroom, which is under water. If you look through the glass on the floating underwater inhabitants of the lake, it creates the feeling that you are under water. And not behind the thick glass, but just like that, you are one of the fish passing by. Well, tell me, where else do you feel so fully united with the water element? In this underwater realm you can lie down on the bed and sleep peacefully, without fear, unlike fish, to be blown away by the current. 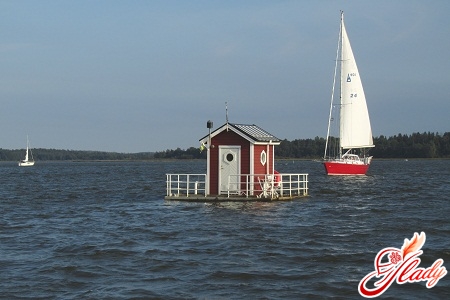 From the underwater depths, it's easy to give up to the skies,where you can feel yourself in the plumage of a woodpecker. This is what you will be offered to do near Stockholm, in Vasters Central Park. Among all the hotels, the will of architects located on the tree, Woodpecker - the most unusual hotel. Only here, ten meters from the ground, you will be offered to live in the house of a woodpecker. Get into your room you can on the stairs, which at night clean. Despite the fact that the house looks almost toy, until the bird's nest is completely stylized, reasonable Swedes did not reach. So, all the conveniences of a civilized person in the room are present. However, fortunately for you, dinner will cost without larvae and bugs, although food is delivered to the room in a rather unusual way: in large baskets on a rope. So, do not worry, to master the percussion work of a woodpecker, getting food from the bark of a tree, you do not have to. Everything, as they say, is good in moderation, and even exotic. 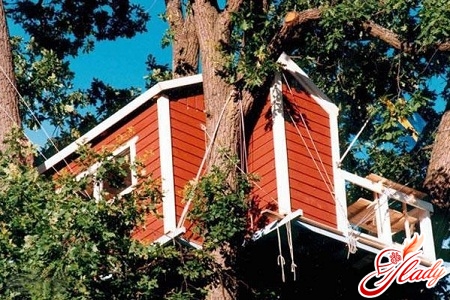 Dust and exhausts of the big city, wool of the belovedYour mother-in-law's cat is your worst nightmare? Then you are in Italy. It is here, in the Dolomites, in the village of Saltria, is the only hotel in the world for those who suffer from allergies. This hypoallergenic oasis is called the hotel "Tirler Dolomites Living Hotel". Everything, from the materials, from which the hotel is built, and ending with food, is checked, awarded certificates and definitely will not cause you an allergy attack. By the way, some tourists specially come here to feel normal without taking medication. But your beloved cat your mother-in-law will have to leave at home. With animals in this oasis for allergic people are not allowed. What the owners do not think outhotels to attract customers! Even the ghosts of these enterprising people, as they say, work out their shelter and bread. And if you add to the ghost of a real heart-rending story of insulted love, you get "Golden North hotel", located in Alaska. It is here that the ghost lives at the rate that wanders along the corridor. This is the girl Mary, whose groom went to the mines and was so carried away by squandering the washed gold in the saloons that he forgot about his bride. Mary died, but she did not believe in the betrayal of her lover, and now wanders along the corridors of the hotel, moaning and crying. Something of the sort will tell you the owners of the hotel. And you can check the presence of the ghost yourself. If you do not have enough thrill, go for them to Alaska. By light imperishable, he will illuminate us the way to infinity

Such words, or something like that,whispered to his beloved in the ear a man who first thought of arranging a romantic date at the lighthouse. On the eve of the eighth of March, a visit to the Heceta Head Lighthouse in the US will be the most romantic gift. And you will get the opportunity not only to have a romantic date on the lighthouse, but also to stay for a few days in the luxurious room of this hotel. Here each room has its own history, after all, a beacon, no less, more than 200 years. About almost royal luxury of each of the rooms you can add legends. But not only and not so much for the luxury tourists come here. The most beautiful begins with the approach of night, when a powerful ray cuts through the pitch darkness, illuminating the path to infinity. And if you get here in December, you will witness a rare sight - the migration of whales. Go to the monastery

Remember the threat of one of the animatedheroines go to the monastery? So, if you took a trip to unusual hotels, you have the opportunity to do it! Of course, temporarily, without the risk of forever staying in the walls of a strict monastery. Such a hotel is in Mexico, this is Sonesta Posada del Inca Yucay. At one time in the terracotta walls of the hotel was the monastery of the Order of St. Catalina. The only thing left in the inheritance from the Order is the walls themselves and, perhaps, an unusual pacification condescending to any guest. And the cells themselves turned into comfortable rooms, where you can relax, enjoying peace. 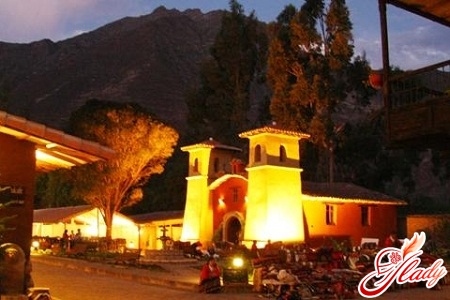 Unusual hotels, as it turned out, can beare arranged not only under water or on a tree, but also underground. One of them is located in a huge cave in New Mexico. This is Kokopelli's Cave. Perhaps the most famous hotel, located in a cave. Despite the fact that the walls serve as a stone, the hotel's facilities are at the highest level. The only drawback is that you have to get here on foot, carrying your suitcases with you. And so the owners in advance warn that luggage should be minimal, of course, if the prospect of feeling like a pack mule is not one of the mandatory elements of the adventure you have conceived. If as a child you were ecstaticknightly romances and dreamed at least once to feel like a beautiful lady or a noble and brave knight - you to Australia, to be exact - to the hotel "Tintagel Nudist Resort". Here you can feel like one of the Knights of the Round Table. And for this you do not have to wear heavy armor unless you yourself want it. But all the entertainment and the interior of the hotel, or rather, small comfortable cottages, are permeated with the spirit of knighthood, which does not affect the comfort of the hotel. Here you and the courts, and the pool, and other modern entertainment in the environment of pristine nature. Among the unusual hotels there are those in which youyou can choose a place to accommodate according to the mood at the moment. These hotels include the New Zealand "Woodlyn Park". There is an opportunity to settle inside a real airplane or live a few days in the car of this train. You can go down to earth and become a den of burrows with all the comforts of a five-star level. In addition, there is a mass of familiar for New Zealander entertainment, such as shearing a sheep or a sheep herd with a real shepherd's dog. You can travel by boat on the river. There would be a desire, and entertainment will be there for every taste. In comparison with many other hotels of this kind, staying at the "Woodlyn Park" hotel will not hit so hard on the pocket. Unusual hotels - not the most affordable in the pricebut if you want to make your vacation interesting and unforgettable, it is definitely worth visiting at least one of them. It is these special features that make up the most important value of any traveler - the treasury of vivid impressions.

Sights of Goa - state of India

Helsinki: the sights of Finland

Florence: the sights of the city

Rest in a sanatorium - with health benefits