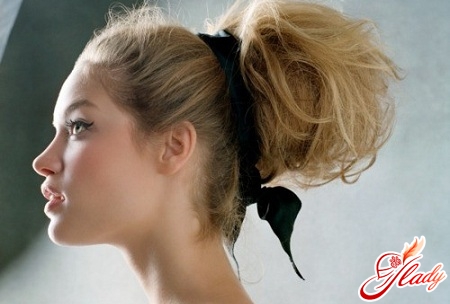 The end of the twentieth century revolutionized thehairstyles, and in the twenty-first century it is often more fashionable is not a carefully laid out hairstyle, but the so-called "ordered disorder". A particularly popular is a careless bunch of hair on the back of the head, which replaced the hit of all years - the pony tail and any piling! And that's interesting, negligence in this case implies still some sort of order.

The pledge of style

Negligence does not mean "inaccuracy". And to make a bunch on your head you do not have to hurry, and not anyhow. Of course, it should look like this, but believe me, just the hair gathered in the bundle will not produce the desired effect. In order to be fashionable and, above all, stylish, this negligence must be emphasized. The difference between stylish sloppy beams from those that are hastily tied on a dirty and unadorned head is simply striking! (Although, perhaps, in this hairstyle there is a charm). Strangely enough, but stylish "sloppy" bundle should look perfect. Or rather, it should be made of perfect hair - healthy, clean, colored, shiny. To understand exactly how a fashionable bundle should look, recall the overseas admirers of this hairstyle: Jennifer Lopez, Kylie Minogue, Lucy Lew, Anne Hathaway. Casually and accurately at the same time: a paradox, but a fact! So, the main condition of stylish sloppy beams is healthy and well-groomed hair. And to make of such impeccable hair a fashionable hairdress of work does not make. 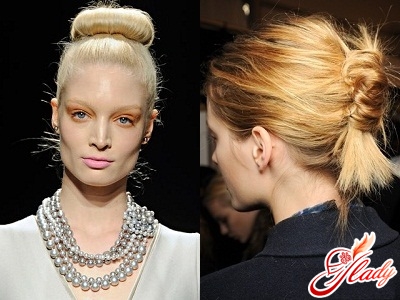 How to make a trendy casual beam

On such a hairstyle you will not need muchtime, and it will not require any special efforts either: just a few minutes to be elegant and stylish. The most important plus of such a hairstyle - all your mistakes will be its advantages! After all, the bundle simply must be negligent! By the way, a similar hairstyle can be done not only from long hair: a bunch of short hair will also look very nice and mischievous. Before you do this hairstyle, be sure to wash and dry your hair. Then we put on them a little means for styling (the size of a good plum): for straight - foam with the effect of increasing the volume, and for curly - smoothing curls cream. After that, we arm with a comb with frequent denticles and only slightly comb the roots of the hair in the occipital part, on the very top and on the sides of the head. At the end of the hair, lightly brush on the surface of hair with a wide brush. Begin to do your hair, collecting hair first in a free tail at the bottom of the head, on the back of the head or on the crown. But we do not tighten the tail with a rubber band, but retreating from the roots of the hair for one or two centimeters to preserve the volume that was stripped earlier. We repeat all the stripping procedures with the tail: we comb it from the inside, and smooth the outer part with a wide brush. Then deftly, holding on to the end of the tail, wrap it around its main part and fix the tips inside the formed beam. The secret is to fix the bun with a hook with a hooked end, where we have hidden the ends of the tail. We do the same on the other side. You can use several more conventional studs for more reliable fixing. And finally, of course, use the varnish! Your fashionable hairstyle is ready!

You, of course, know that for different types of facefit different hairstyles. So the bunch of hair also does not fit everyone, although it is considered a universal hairdo. The advantages in such packing, certainly, are: the collected hair as much as possible I open the face, a neck, a zone of a decollete and shoulders. By the way, this hairstyle also opens ears. So a stylish bundle can make your dignity more visible, and "bare" the flaws of the exterior. But if you have nothing to hide, then boldly twist the beam! However, there are nuances that should be taken into account. In particular, this concerns the length of the neck. Ladies of asthenic build, in which the neck is thin, it is advisable not to overdo with the fleece: otherwise the head will seem unnecessarily massive. Women with a high fit of the head and a bunch need to be done high on the vertex: so the "swans" of their necks will only benefit. But the girls, whose neck is not very long, it is better to make a bunch on the back of the head. Otherwise (a bundle on the vertex) visually even more "crush" the already not too long neck. It is recommended not to make high-placed beams to tall girls, unless, of course, they are trying to emphasize their growth. They'd better make a bundle on the side or move it to the back of the head. Ladies of small height should not abandon this fashionable hairstyle, but are forced to abandon the magnificent fleece and bulk beams. This hairstyle allows and bangs, you can make and curls on the temples, and use additional accessories. True, all kinds of pins, rhinestones and flowers should be at a minimum. To make a careless bunch is easy, but it is even easier to spoil a hairdress with an abundance of ornaments. Because as for negligent beams, the main decoration should be hair after all! We advise you to read:

Step-by-step instruction on how to work with the cache site LetyShops.ru