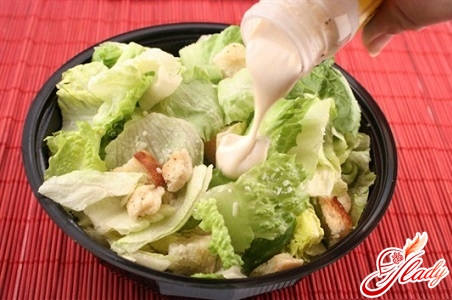 There is a huge number of optionscooking sauce "Caesar", each owner has his own recipe. So which of them is classic, original, thus, which was invented in the distant 1924 by an American restaurateur, an emigrant from Italy, Caesar Cardini?

History of origin of Caesar sauce

The founder of the classic recipe was born in1896 in Italy. After the end of World War I, Caesar emigrated to the United States. He stopped in the city of San Diego with a dream of his own restaurant. At this time in the States acted the dry law. Therefore, in order to get more profit, Cardini decided to bypass the "geographically" framework of the law and opened his small establishment 20 miles from home in Mexico, in the town of Tijuana. It was a restaurant that also included a hotel called "Caesar's Place", which translates to "Caesar's." July 4, 1924 in the US celebrated Independence Day. And, as on all holidays, the Cardini restaurant had a particularly large number of guests from the States wishing to have a good drink. Mostly they were businessmen, stars of Hollywood cinema. For this purpose, the Americans crossed the border - what can not you do for the sake of unrestrained fun! There were so many visitors that Caesar did not have enough snacks for everyone. The holiday was in full swing, it was necessary to do something urgently, so as not to upset the guests. And then he left the situation, preparing a dish from what was left in the kitchen. Namely - lettuce leaves, bread, olive oil, parmesan cheese, eggs, garlic, lemon, Worcester sauce. Cardini put salad leaves on a plate, croutons roasted in olive oil with garlic, sprinkled with grated parmesan and tucked it all in an unusual sauce. For him, Caesar took eggs, lain in boiling water for a minute, olive oil, lemon juice, mustard, garlic and Worcestershire sauce. A well-mixed mass of these ingredients and later became a classic "Caesar" sauce. And there were no anchovies in the filling, light fish notes in taste were present thanks to the Worcesters sauce. The guests were delighted with the new dish. The name he did not have to invent for a long time. Salad with Caesar sauce became the card of the Cardini restaurant. This is how the most popular in the world and loved by all the classic recipe for salad "Caesar" with an unusual salad dressing, named after its author. Since the advent of the salad "Caesar" in its compositionAdded and shrimp, and chicken, and slightly salted trout. Everyone adds to the recipe something to their taste. But his sauce remains unchanged, without which there simply can not be a real Caesar salad. So, for the preparation of Caesar sauce according to the classic recipe, we will need:

First you need to get the egg of their refrigerator,it must be at room temperature, otherwise it will burst during cooking. We put it in a pot of water, put it on the fire and wait for the water to boil. As soon as this happened, the fire is switched off and we detect exactly 1 minute. Then we get the egg - it's ready for our sauce. We break it into a prepared bowl, the yolk will pour out itself, and the squeezed squirrel will be taken from the shell with a spoon. Garlic squeezed through the press in the same bowl. Add the lemon juice, mustard, salt, pepper and start whipping with a submerged blender, gradually pouring in olive oil. Consistency should be dense, like 10% sour cream. The finishing touch is a Worcester sauce. This is a fairly rare and little-known product to us, which is not sold in every store. It can be replaced with balsamic vinegar in the same amount. Alternatively, prepare a Worcestersky sauce by yourself, only it needs to be done in advance, since it requires a two-week exposure at least. 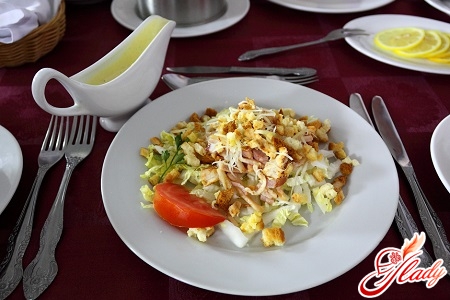 For the preparation we need:

Finely chop garlic, onion and ginger root. We take gauze, folded at least 2 times. We put on it garlic, onion, ginger, cinnamon stick, pepper, clove, mustard and cardamom. We tie it to make a bag of spices. Pour vinegar, water, soy sauce into a saucepan. We put on a weak fire, stirring, we pour out the sugar and lower the gauze bag with spices to the bottom. We bring to a boil and boil for 40 minutes. Anchovies are finely chopped and we add them together with curry and salt to our saucepan. A minute later turn off the fire and let it cool down. Then you should pour all the contents into a glass jar and put it in the refrigerator for 2-3 weeks. After this time, the sauce must be filtered and bottled. Keep the Worcester sauce in the fridge and do not forget to shake it well before use. Sauce "Caesar" is better to use immediately after preparation, then it will be the most fragrant and the right consistency. If you did not use it all at once, it can be stored in a refrigerator in a closed container for up to 2 days, only before use it will need to be re-beat. Pleasure yourself and your family with the delicious classic Caesar sauce. Its unique taste will diversify your festive table and make your daily dinner exquisite. After all, it is not only a salad dressing, it can be eaten with French fries, with meat dishes and even as a sauce for pasta. Bon Appetit!

Cowberry sauce for meat: the use of cranberries

Besamic sauce for lasagna: a recipe for delicious gravy

Salad dressings based on eggs

The recipe for mayonnaise without harmful ingredients

Sauce for Caesar with shrimps: a self restorative