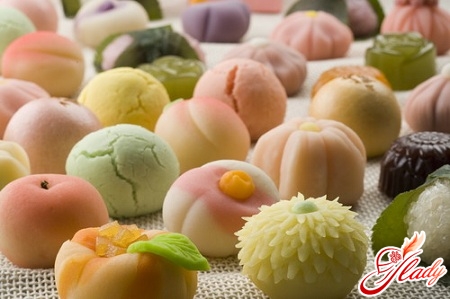 Although we are already accustomed to many Japanese dishescuisine, the cooking of the Land of the Rising Sun is still exotic for us. What are the recipes of Japanese desserts? But meanwhile, desserts as such in traditional Japanese cuisine were long absent. The Japanese loved them after they got to know European culture. And before that, they were perfectly satisfied with fresh fruits, dried fruits and nuts. Yes, and modern Japanese desserts are very different from those sweets, which we are accustomed to. Conservative Japanese, having adopted fashion for harmful (from their point of view) dishes, managed to adapt them to their own culinary traditions and taste preferences. In Japanese desserts you will not find the usual cream, chocolate or cream. Fruit pastes, marmalade, jelly, jams, caramel - that's what basically comes in Japanese sweets. And, of course, fruits and nuts. It is quite difficult to buy traditional Japanese delicacies (this is not sushi and rolls!), But you want to try. Therefore, many dare to culinary experiments and prepare such desserts themselves. Well, the case is commendable. And if you want to participate in such an experiment, here are some recipes for you.

Non-standard, but it is quite customary: ice cream - it is also ice cream in Japan. To prepare this Japanese dessert, we will need the following ingredients:

Preparation: Pour the tea into powder. Boil the milk, dissolve the sugar in it and add tea. Sweet, brewed in milk tea, we insist twenty minutes. To the cooled tea, add condensed milk and cream, beat well (with a mixer or in a blender) and freeze. After three hours we take out of the freezer and take a sample from a traditional Japanese dessert. Note: Cream should be at least 34% fat, the amount of sugar can be reduced or increased. 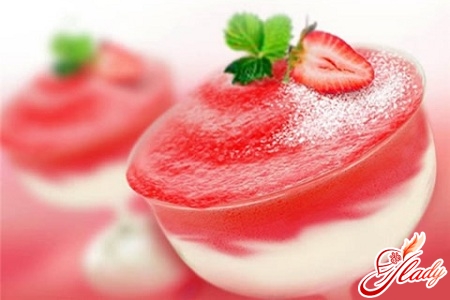 To put it bluntly, a shocking recipe! Cakes from peas? This could only come up with the Japanese. Would we dare to try this option of Japanese dessert? Ingredients:

Preparation: We'll make the cake yellow-green (as expected): from the egg and pea mixture. For the first we boil hard-boiled eggs, extract the yolks and wipe them through a sieve. We pour into the bowl, knead it and mix it with a piece of sugar. For the second mixture of peas, boil for about fifteen minutes, until it becomes soft, drain the water and knead it (but not in mashed potatoes!). Add the remaining sugar and cook the sweet green paste until all moisture evaporates from it. Cool it down. Both mixtures are divided into six to seven equal parts and proceed to the production of cakes. Take a thin cotton napkin or gauze, moisten it and squeeze it. We spread the napkin on the table, put on it one serving of green paste, and on top - a portion of yellow. Raise the corners of the napkin up and tightly twist it. So we will connect both portions of the paste in one ball and set aside on the cake an intricate pattern from the folds of the fabric. We also make the rest of the cakes. We cool. We also try this variant of Japanese dessert. Note: Instead of a napkin or gauze, it is convenient to use a conventional handkerchief.

Such a Japanese dessert is not surprising. And yet it's rather unusual: tangerines in syrup, and even with vodka! Ingredients:

Preparation: We take small dense tangerines, we clean, we put in a saucepan and fill it with cold water. Add the vodka, put on a strong fire and bring to a boil. Then the fire is diminished and we cook (tulish) the tangerines for about fifteen minutes. We take out of the pan, let them cool and dry. While the mandarins are cooling down, prepare the syrup. In the same water, where tangerines were brewed, add sugar and an incomplete glass of water. Cook the syrup (stirring constantly): bring to a boil and simmer for a couple of minutes. We put tangerines in the syrup and boil them for another ten minutes. The finished dessert is taken out of the syrup, letting them dry and cool. We put it away in the refrigerator. We taste chilled. 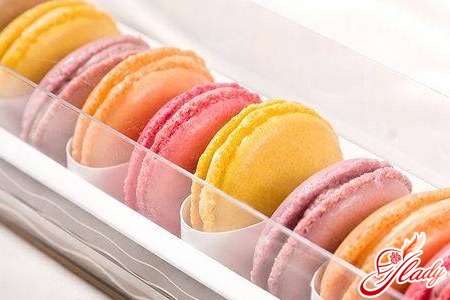 Preparing this Japanese dessert will be more difficult than previous versions. But if we have firmly decided to master the wisdom of Japanese sweets, then we can not do without motive. Ingredients:

Preparation: Rice is washed and soaked overnight. In the morning we again rinse the rice, wrap it in a dense cotton napkin and cook for forty minutes a couple. After that, rub it in a mortar or grind it in a blender. And then - the most tiring. We mix the rice until we get a strong dense mass. We continue to knead this rice dough, gradually pouring powdered sugar to it. As soon as the rice mass ceased to stick to your hands - it is ready. For the filling, melt the chocolate in a water bath. We form candies. We pluck a bit from the dough and knead it into a lozenge. In the middle of the rice cake we put a little chocolate and gently tear the dough from above. Align, shaping the ball. Ready-made sweets are served, putting each on a pink petal. Note: You can use fresh strawberries, grapes or yoghurt souffles as fillings. Well, did not you scare the traditional Japanese desserts? Recipes are not very exotic? Then - for the cause! We advise you to read: