To the fact that this is a dish of traditional Georgian cuisinefirmly entered the home menu representatives of very different nationalities, we owe the blessed days of the USSR. There was not in this legendary country a more or less large city, in which there would not be a restaurant of Georgian cuisine. And in such a restaurant must be served Khvancharu, Kindzmarauli, Satsivi and Chahokhbili. So, the chahochbili ... Initially, this way in Georgia was preparing feathered game, namely the pheasant. And in the original Chahokhbili is nothing but a way of cooking pheasant, and in literal translation it means "cooked like a pheasant" (pheasant in Georgian "Hohobi"). Later this word was called a ready-made dish, which today is cooked mainly from poultry (mostly from chicken). Therefore, the recipe chahokhbili - a recipe for chicken, "cooked as a pheasant." Is it tempting? Then we try to cook.

Notably, neither oil (fat) nor water forcooking chakhokhbili are not needed. Therefore, for him, the chicken "with fat" is chosen. This variant is the most common. The basic set of products is chicken and onions, everything else is at the discretion of the cook. In the most famous variant, the cook also saw tomatoes with spices. Ingredients:

Preparation: I wash my chicken, cut it and cut it into small pieces. Then fry them in a dry frying pan (no fat) until a ruddy crust. To do this, put the pieces of chicken in the already heated roasting pan: under the influence of heat, fat begins to be heated, and the meat is roasted. Therefore, neither chicken skin, nor fat from meat before roasting is not removed. We toss the fried chicken from the pan into another bowl. Sliced ​​onions or straws in a pan in a frying pan and fry in the fat left from the chicken. The degree of readiness of the onion is determined by the color: a light golden brown fry should be obtained. Turn off the fire, leave the onions in a frying pan, add meat to it and take tomatoes. We pass them by boiling water and peel them. Then cut the tomatoes into cubes, pour into the frying pan with meat and mix everything thoroughly. We extinguish under the closed lid for fifteen minutes. After fifteen minutes, carefully (so as not to burn yourself with steam), remove the lid from the brazier, add salt, spices and wine. From the obligatory for chahokhbili spices you need to take coriander, basil and hot red pepper. It is desirable to add more and a specific mixture of uccio-suneli (fenugreek blue). But if it is difficult to get it, then you can use a more accessible spice of hops-suneli, which includes fenugreek. Add spices and salt, leave the meat stew on a small fire for about half an hour. At the very end of the preparation, add finely chopped or grated garlic. Served with fresh herbs and a side dish of rice, potatoes or pasta. 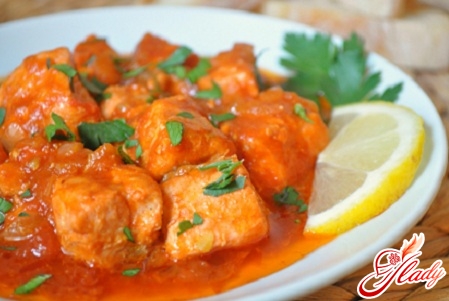 Why not? Lamb can also be "cooked like a pheasant". Therefore, we try this variant of Chahokhbili: a recipe for mutton dishes with red wine and tomatoes. Ingredients:

Preparation: The mutton is cooked longer than the chicken. Therefore, proceed as follows. We cut off all the fat from mutton and pour it into a frying pan. We put a pan of water on the fire and, while the water boils, we cut the meat into small pieces of medium size. In the boiling water throw meat (literally for a few seconds). As soon as the meat "grab", throw it into a colander, let it dry and fry on the already cooked fat. While meat is toasted, cut the onions and add it to the meat. Fry until the onion is fried. Then add to the meat sliced ​​tomatoes, wine, bay leaf, garlic and other spices, salt, pepper, cover with a lid and stew for about an hour and a half. We cook rice or potatoes for a garnish.

For these purposes, the pre-packedchicken wings or thighs (we'll buy it on the way home in any supermarket). Instead of tomatoes, we take tomato paste, and instead of wine - lemon. Strictly speaking, we will get a free interpretation on the topic of meat, "cooked as a pheasant". Ingredients:

Preparation: We clean and cut the onion and fry it in hot oil. Onions are taken out of the frying pan and in the same oil fry pieces of chicken (which we have already got out of the package, washed and dried). We spread the tomato paste with water and pour the chicken-onion roast. Extrude the same juice of lemon, add salt and a little sugar and stew for about twenty to thirty minutes. At the very end of the cooking, put a couple of leaves of a laurel and a pair of cloves of garlic in a chahohby. Serve with any side dish. This recipe was published in the book "Secretshome cooking ", published in Minsk in the late eighties of last century. How close this recipe to the original, you can only argue. But, as they say, what is written with a pen, that you can not cut out with an ax. And the following is written there: "Chahokhbili from chickens" Ingredients:

Preparation: Prepared chicken chop into small pieces and fry. Add finely chopped onions, tomato puree, vinegar, wine, half a glass of meat broth, salt, pepper. Cover and simmer for an hour and a half. At the end of the stew put the sliced ​​tomatoes. Before serving, put a slice of lemon on each piece of chicken and sprinkle with herbs. As you can see, different recipes for Chahokhbili are similar in one. Fried meat is stewed with onions and tomatoes (tomatoes) with the addition of something sour: wine, vinegar, lemon. Apparently, that's exactly how they prepared the Georgian pheasant "hohobi", which went down in the history of cooking, giving the name to the popular dish of chahokhbili - meat, cooked as a pheasant.

Recipe for sweet pilaf: a dish for breakfast, lunch and dinner