Many people for some reason developed a persistentrejection of pearl barley in any form of its preparation. And yet this product is very useful - and its caloric content is much less than that of the same rice, and the beneficial substances in the pearl bar contain in abundance. By the way, contrary to the established opinion, pearl barley is also delicious, if, of course, be able to cook it. Therefore, in order to be sure of all of the above, try, for example, to prepare a pickle with a pearl barley. We will offer you several options for this delicious soup (with meat, chicken and mushrooms), and you will only have to choose a recipe.

The recipe for a classic rassolnik is a soup recipe for beef broth with pearl barley and pickled cucumbers. Try to cook such a soup - it turns out very tasty! Ingredients:

Preparation: The recipe is designed for a three-liter soup pan. Therefore, we put in a saucepan the washed meat and fill it with cold water. The first broth is poured out after boiling water and the appearance of foam. My pan, again put meat in it and pour cold water. When the water boils, make a fire of minimum power, cover the pan with a lid and cook the meat for two hours. Meanwhile, we wash several times with cold water pearl barley, and then steal it, pour boiling water, and leave the minutes for forty. In the process of steaming we change the cooled water to boiling water. With cucumbers, peel and cook from her broth, boiling the cut skin for ten to fifteen minutes. The cooked peel is removed and discarded. Onions are cleaned and shredded, and the carrots we clean are cut into strips. In a frying pan with vegetable oil, fry the onion first (until soft), and then add the carrots and continue to fry the vegetables for another two to three minutes. Now we still clean and cut into cubes potatoes finely chink the peeled pickled cucumbers. While we were engaged in vegetables and pearl barley, the meat had to be cooked. We take a piece of beef from the pan, separate the stone and cut the flesh into small pieces of medium size. Again, put the meat in a saucepan and add pearl barley to the broth. Cook soup (broth with meat and pearl barley) for fifteen minutes, and then put the potatoes and continue to cook until the potatoes are ready. Now add the fry from carrots and onions and pickled cucumbers. Season our classic pickle with pearl barley spices and cucumber pickle and cook for another five minutes. After that, turn off the fire and let our aromatic soup brew. We serve rassolnik with sour cream, fresh herbs and crispy bread. 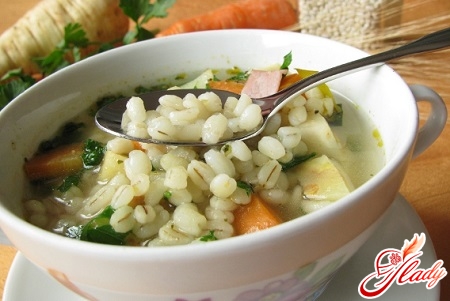 What is good is pearl barley, so it's becauseLenten dishes with it are very nutritious. Therefore, in the monastery kitchen there are many dishes prepared with pearl barley. The recipe for one of them we offer. And we will prepare rassolnik with pearl barley and mushrooms. Ingredients:

Preparation: Pre-soak the pearl barley, fill it with clean cold water and leave for two hours. After that, the water is drained, the rump is washed, poured with clean water and cooked for about twenty minutes. While the croup is being brewed, we cut the defrosted mushrooms into small pieces and fry in vegetable oil. Twenty minutes after the boiling of the cereals we put the fried mushrooms in a saucepan and continue to boil the pickle for another ten minutes. For that time we need to clean carrots, potatoes and onions. Potatoes cut into cubes and add to the soup, which continues to cook for another fifteen minutes. While potatoes are being cooked, grind the carrots on a large grater and shred the onion finely, and then fry them in vegetable oil. On a large grater we also grind salted cucumbers, previously peeled. When the potatoes in the pickle are ready, add one by one, waiting for the boiling of the soup, first the fry from onions and carrots, then the cucumbers, and then all the spices. We continue to cook the soup for another five to ten minutes, and then turn off the fire and leave the rassolnik insist. Preparation: Chicken stomachs are thoroughly washed, remove the remnants of the films and set to cook for about an hour. In this case, you need to pour the stomachs with cold water and add a leaflet of laurushka to them. After an hour, add a handful of washed pearl barley to the broth and continue to cook. While cooking the groats, mine, we clean and shred vegetables. Onion - small cubes, carrots and celery - straws, potatoes - cubes of medium size. Potatoes are poured cold water, and onions with carrots and celery we pass on vegetable oil. At the end of the dressing, add the tomato sauce and stew for about two to three minutes. Leave the tomato dressing in a frying pan, and put the potatoes in a pot. Cook until the potatoes are ready. After that, we put Tomato-Vegetable dressing in the pickle, and when the soup boils again, add salted cucumbers cut into small cubes. We give the pickle maker to cook for another four minutes, try it on salt and add the spices. Serve our homemade aromatic soup with sour cream or mayonnaise. As you can see, the recipe for pickling with a pearl barrel is not so complicated. By and large you can cook this soup with any meat. Of course, the traditional option - is rassolnik in pearl barley on beef broth. However, other meat, and even in the lean version, this soup will still get very tasty. The main thing is to cook with pleasure. Enjoy your appetite and success in the culinary field!